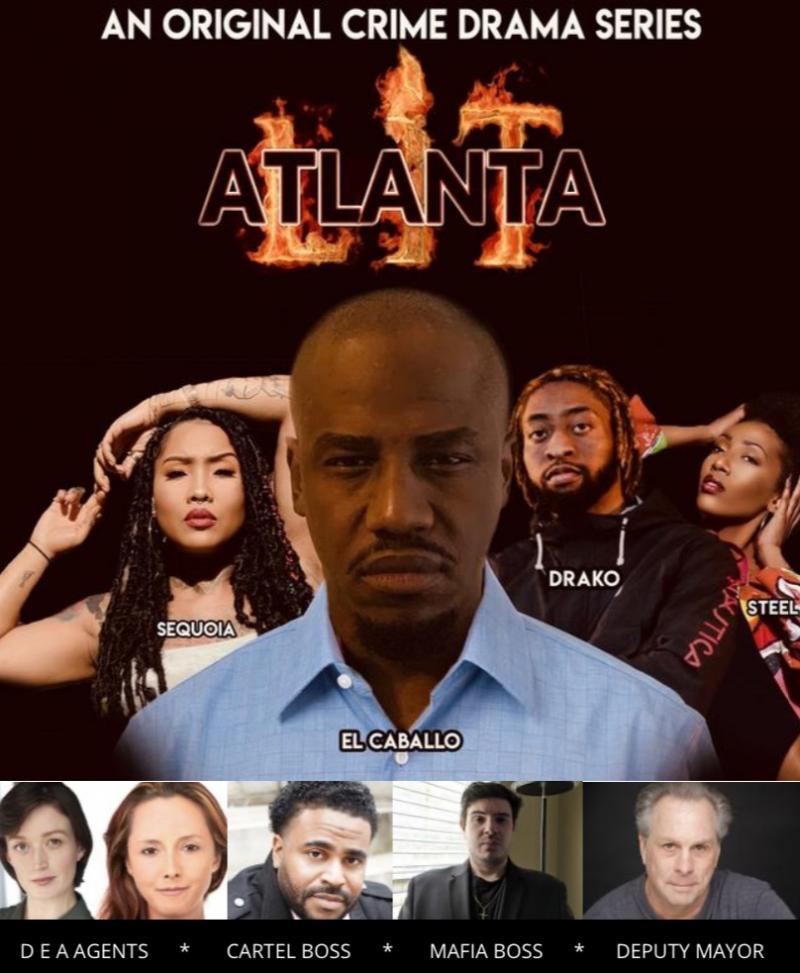 Detailing the inspired by true events pertaining to rise of the Zone Boss of Bosses from Atlanta Georgia. With detailed accounts revealed in this calculated powerhouse of a pilot series. By showing the statement that is cementing the show's concept of "No One is Safe!" Although the many law enforcement has tried to dismantle the elaborate way these narco traffickers clean and wash their money. The DEA never saw this coming and yet, it has been in their face the whole time. This out in the open concept literally will slap the law in it's face for not recognizing this is going on.This show has an all familiar story to tell of drug deals with new faces pushing pass the great wall of cocaine. Bringing with it are several twists and turns this is within 2 minutes of the show's pilot beginning. Let me introduce you to the man that makes it happen on a massive scale:' El Caballo ' is notorious for being known as one of the biggest drug kingpins in Atlanta's history. This crime drama tracks El Caballo's life in crime, from his beginnings in the drug zones in present day through his rise to power as the leader of Atlanta's narcotraffickers. Along the way, he battles enemies and people who try to stop him from building his empireLit Atlanta: is an American crime drama web series created and produced by Blue Gold media set to premiere on a major streaming network once finished. It focuses on the illegal drug trade in Atlanta Georgia. "Lit Atlanta" explores the new visionaries of the drug war both trafficking and law enforcement. Bringing a once disorganized of independent zone bosses, the mafia, and cartels together in the present. As ' El Caballo ' takes control of the unified narcotraffickers to see his vision to expand. Corrupt government and DEA agent's all look to either take bribes or take him & his organization out by any means.This show will base its series success on these two key components a great cast of actors actresses, and action. The director is using Atlanta's beautiful scenery and bustling city participation with camera angles to bring the plot's betrayal, and money washing to life. It has literally brought the obvious attention out to this pilot series from some heavy-hitting streaming networks. Lead actor: Horse Wren as ' EL CABALLO 'actors: Sterling Jones as DRAKO Guy Messenger as Deputy Mayor Ted HutchinsonChristopher Sho as Cartel Boss Orilio Cotez Brian Decroce as Mafia Don Patrick Jauconieactresses: Karonda Amor as STEEL Cali Sonte as SEQUOIA Elizabeth Tyson as DEA Agent Mims Laura Piquero as DEA Agent D'susantThe narcotrafficking game has finally taken a change! With the new ideas that El Caballo has devised and the unification meetings of these zone bosses, cartels, la costra nostra, triads, and yakuza, and the Russian mob. Inspired by true events, this series has the game brought to the highest levels. Watch the LIT ATLANTA crime drama series trailer: https://youtu.be/_rlSyPeVZHoWWW.LITATLANTATVSERIES.COMBlue Gold Media 105853 Lexington road suite 9 Southfield Michigan 48227A New set of filmed visions to bring to the screen. Blue Gold Media has great content to show the world.

You can edit or delete your press release Lit Atlanta crime drama series gaining groundswell with it's viewing anticipation! here

02-22-2018 | Science & Education
Conference Series
Preventive Oncology 2018 Atlanta, USA
4th Annual Conference on Preventive Oncology Preventive Oncology 2018 is the study for preventing cancer to develop, rather counteract the advancement in progression of different malignancy which is going to be held in Atlanta, USA on July 18-19, 2018. Annual congress on Preventive oncology 2018 has taken an initiative to join the assorted research and business groups working in this field under one rooftop to explore each and every part of
04-01-2012 | Advertising, Media Consulting, …
DMC Atlanta
DMC Atlanta Proud to Become GACE Sponsor
DMC Atlanta, Inc. 1200 Ashwood Parkway STE 170 Atlanta, GA. 30338 (770) 817- 4646 – Phone (770) 817- 4647 – Fax www.dmcatlanta.com jenna@dmcatlanta.com Atlanta, GA – March 31st, 2012 - DMC Atlanta is proud to announce that they have signed on for 2012-2013 as an official sponsor of the Georgia Association of Colleges and Employers (GACE - www.gace.org). Although DMC has been involved with GACE in the past, this is the first year as an
07-27-2011 | Energy & Environment
MNE
Atlanta Electrical Contractor Lights Up Faces
Atlanta, Ga. – July, 2011 – My Neighborhood Electrician is spoiling customers through electrical work. Their employees are trustworthy and the work is reliable. They are the premier Atlanta electrical contractor, servicing both residential and commercial customers’ needs. Being the premier commercial electric company, My Neighborhood Electrician takes the utmost precautions when choosing employees. Prior to joining the company, each potential employee is checked in order to ensure customer’s security and
07-18-2011 | Sports
http://www.beltline.org
ATLANTA BELTLINE RUNNING SERIES ANNOUNCES SOUTHWEST 5K
Saturday, July 16 Run/Walk Will Include Friendly Competitions Between Atlanta Police and Fire Departments, As Well As Post-Event Food, Activities and Fun ATLANTA (July, 2011) The Atlanta BeltLine Running Series announces its second event, the Atlanta BeltLine Southwest 5K. A Run/Walk along the Atlanta BeltLine Southwest Trail and through the historic West End and Westview neighborhoods, the Southwest 5K race course is a great way to explore local parks, connect with
02-12-2010 | Business, Economy, Finances, B …
Vistage International
Announcing Vistage Information Event (Atlanta)
Vistage International, the world’s leading chief executive organization, and Lauch McKinnon, Group Chair, Vistage International, will be hosting a complimentary, informational event for visionary business leaders at the Ravinia Club, Two Ravinia Drive in Atlanta on Tuesday, February 23. Seating is available for the morning session from 7:30 to 9:30 a.m. (complimentary breakfast served) and the afternoon session from noon to 2:00 p.m. (complimentary lunch served). One must
03-09-2007 | Arts & Culture
Angela Moore
Atlanta Artist Xplosion 2007
CREATIVE FINE ART HOSTS ARTISTS XPLOSION, A FINE ART SHOW IN ATLANTA ON MARCH 16, 2007. COME OUT AND ENJOY A NIGHT OF BEAUTIFUL ART AND LIVE JAZZ! ATLANTA, GA., March 7, 2006 – Creative Fine Art invites the public to come out and enjoy a night of art and live jazz. Creative Fine Arts will host Artists Xplosion, a fine art group exhibition of emerging and established
Comments about openPR
We publish our press releases on openPR.de because we like people who are "open" - just like us.
Frank Obels, CEO, INCONET - Informationssysteme, Communication und Netzwerkberatung GmbH