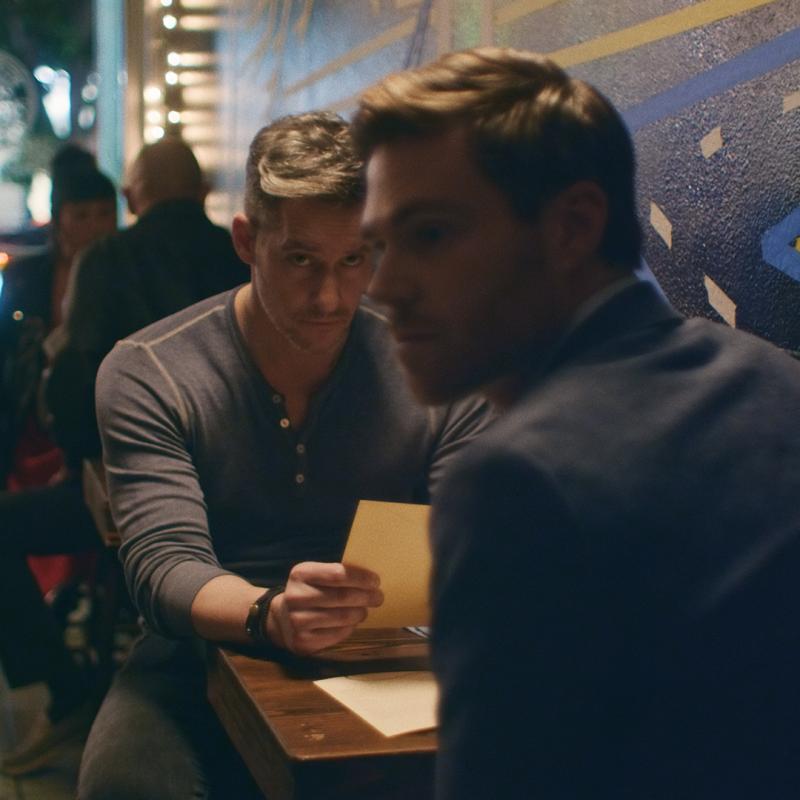 LOS ANGELES, Calif., May 17th, 2020 // Retrofit Films announces the world premiere of Hidden Canyons, the first-ever minute-long LGBT+ soap series, on its Instagram page (@1minutegaysoap). The series uses humor and soap opera tropes to tackle issues within the LGBT+ community. "We often see reductive depictions of the LGBT+ world in media," says creator Brant Rotnem. "I wanted to tell stories that speak to the nuances we don't get to see. For instance, what is the community's relationship to materialism and success? Should we structure romantic relationships like straight couples, or redefine them in our own way? What complications can arise when a same-sex couple asks a family member to help them conceive?"The show aims to revolutionize the way we consume narrative content. In addition to the micro- episodes, the creators have unique strategies to engage with viewers. Comments beneath episodes pose questions about what audiences want to see happen next, and viewer feedback is factored into future storylines. "Ordinarily, this would conflict with narrative arch development," says Rotnem, "But the genre affords us some liberty - it's a soap, so anything can happen at any time!"The showrunners decided to launch on Instagram because of how users interact with its content. "We follow people we don't know, and become invested in their lives," says Rotnem. The show hopes to build the same investment in its characters. Instagram's "Highlights" - featured stories at the top of the show's page - provide deeper dives into the worlds of the characters; their passions and inspirations, day-to-day routine, even how they're spending their quarantine. They are not two-dimensional characters that only live within the show, but multi-faceted people with lives beyond the drama. According to Rotnem, this feature has the added benefit of enabling the creators and actors to engage with followers from their homes over the coming months, until production can safely resume. The episodes are designed to be fast and steamy, and each ends on a cliffhanger. Rotnem says he was intrigued by the possibilities of the minute-long narrative, which is the maximum length of a single Instagram post. "There's no legroom. Everything said or done is absolutely essential. And the constraint has proved a fascinating challenge - we love finding a way to make something big happen every minute." The show is the latest in Hollywood's move toward shorter content production. With the success of short-form series on YouTube, Snapchat, Facebook Live, and Quibi, productions are adapting to shrinking attention spans. Hidden Canyons follows the trend to its next logical step: bite-sized TV, meant to be consumed in less than the time it takes to brush your teeth.The series is written, produced, and directed by Rotnem, and co-directed by Fawzia Mirza - a White House Champion of Change, Indiewire "Top 10 Creative", and Independent Magazine "10 Filmmakers to Watch". The cast includes Sufe Bradshaw (VEEP's Sue Wilson), Daytime-Emmy-nominee Sean Samuels (GIANTS the Series), Tonatiuh (VIDA's Marcos Zamora), Jeremy Glazer (Rust Creek, Modern Family, 9-1-1), Brant Rotnem (13 Reasons Why), Jackson Davis (VIDA, NCIS), Jamie Renee Smith (Weeds, True Blood), and Sean-James Murphy (Danger 5, Neighbors). The first season debuts on the show's Instagram page (@1minutegaysoap) on Sunday, May 17th at 2:00 PDT/5:00 EDT.Retrofit Films 5455 Wilshire Boulevard Suite 1406 Los Angeles, California 90036 Chris Hanada, Producer chris@retrofitfilms.com Brant Rotnem, Producer brotnem@gmx.comRetrofit Films is a digital-first production company founded by Chris Hanada and Tanner Kling in 2005, and has produced award-winning original, branded, promotional, and digital content. Their work has won a Writer's Guild Award, a Producer's Guild Award, and been nominated for an Interactive Emmy. Retrofit projects have been broadcast on all major US networks and digital platforms.

News-ID: 2048167 • Views: 245
Comments about openPR
OpenPR is clearly structured and remains true to its principle of confining itself to the essential parts. OpenPR has proven to be a very good and reliable partner to our media agency: Within the shortest time the releases are online and go down well with the media representatives. The success of OpenPR is reflected in the steadily increasing number of press releases. It is good that OpenPR exists!
Ursula Koslik, Director Marketing & PR, F+W Hamburg