Second edition of Spark in Action is published 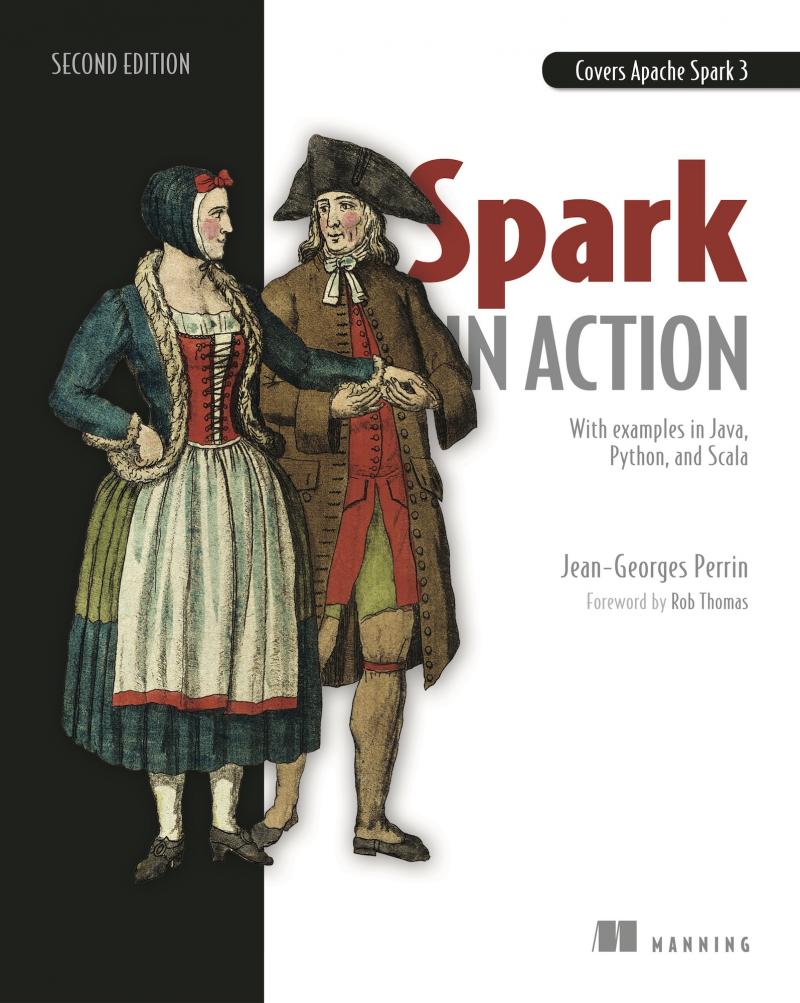 FOR IMMEDIATE RELEASEShelter Island, NY - May 14, 2020 - Manning Publications proudly announces the release of Jean-Georges Perrin's latest book, Spark in Action, Second Edition, focused on the Apache Spark project. The 576-page book focuses on the use of Apache Spark in data engineering and data science, using the Java programming language, including examples in Python and Scala. Apache Spark--or Spark, as it's commonly known--is a collection of powerful tools for manipulation of data in a distributed way. Spark in Action, Second Edition, is a brand new, first-time-released book by Perrin (named Second Edition by the publisher only to reflect the focus on the latest release of Spark) that offers a gentle approach to these complex paradigms.Nearly six years ago, Apache Spark was released. Originally developed at the University of California, Berkeley's AMPLab, Spark was donated to the Apache Software Foundation, which has maintained it since. Its initial release date was May 26, 2014. From this day on, Spark has grown to become the premier open source technology for Big Data and analytics at scale processing, including machine learning, deep learning, and artificial intelligence (AI).Contributions from numerous companies like Databricks, IBM, Netflix, Uber, Intel, Apple, Alluxio, Oracle, Microsoft, Cloudera, NVIDIA, Facebook, Google, Alibaba, as well as many universities are now finalizing a third version of Apache Spark. Senior Vice President, Cloud and Data Platform at IBM, and author of the book's foreword, Rob Thomas, prefers to define Apache Spark as an "Analytics Operating System." Perrin concurs with the definition, explaining the vision in the opening chapter of the book.The book is divided in four sections with 18 chapters and 18 appendices, giving both data engineers and data scientists the tools and knowledge to take Spark from introduction to production. Thomas confirms: "This book reveals the tools and secrets you need to drive innovation in your company or community." Nearly 2000 copies have sold even before today's release of hard copy, through MEAP, the Manning Early Access Program. Early readers and reviewers praise the book on the Manning website (http://jgp.net/sia). Anupam Sengupta, of GuardHat, shares: "An indispensable, well-paced, and in-depth guide. A must-have for anyone into big data and real-time stream processing." Conor Redmond, of InComm Product Control, agrees: "This book will help spark a love affair with distributed processing." Markus Breuer from Materna IPS, simply concludes: "Currently the best book on the subject!"The author's enthusiasm is palpable. Perrin gushed: "This project has been an effort spread over more than three years, with lots of energy spent in research, finding the right examples and use-cases, and, finally, enhancing the book based on the feedback from editors and reviewers. It has been intense." Spark in Action, Second Edition, is overflowing with illustrations with over 180 diagrams, labs, and real-life data sets including NASA; Perrin adds: "I deliberately focused on using examples that are very close to real-life datasets, to make sure the reader is exposed to edge cases." Examples use the Java programming language in the book, but the repository offers equivalents in Python and Scala, two languages that are very popular in data science and data engineering. "The choice of Java as the programming language allows this to reach more developers interested in the fields of big data and analytics," confirms Perrin.Spark in Action, Second Edition, is packed with essential information, that allows software engineers and data engineers, as well as architects, to embrace big data engineering without huge prerequisites or complex concepts. Discover more about Spark in Action, Second Edition at http://jgp.net/sia. Technical information about the book: May 2020, ISBN 9781617295522, 576 pages, printed in black & white.Jean-Georges Perrin Oplo 563 Oak Crest Drive Suite #100PR Chapel Hill, NC 27516 info@oplo.ioAbout Jean-Georges Perrin. Jean-Georges Perrin "jgp" is a senior solutions architect with Advance Auto Parts, Inc. and the author of Spark in Action, Second Edition (Manning). He is passionate about software engineering and all things data, small and big data. His latest endeavors lean more and more toward data engineering, data governance, and, his favorite theme, the industrialization of data science. He is proud to have been the first in France to be recognized as an IBM Champion and to have been awarded the honor for his 12th consecutive year, in 2020. Jean-Georges shares his more than 25 years of experience in the IT industry as a presenter and participant at conferences and through publishing articles in print and online media. His blog is visible at http://jgp.net. When he is not immersed in IT, which he loves, he enjoys exploring his adopted region of North Carolina with his wife and kids.For more information, contact Jean-Georges Perrin at jgp@jgp.net. About Manning Publications Co.Manning Publications is an independent publisher of computer books and video courses for software developers, engineers, architects, system administrators, managers, and all who are professionally involved with the computer business. Manning also publishes for students and young programmers, including occasionally for children. Manning is an entirely virtual organization based on Shelter Island, New York, with many staff working from far-flung places like Manila and Zagreb. Manning publishes standalone titles as well as book series, its signature series being "In Action."For more information, contact our marketing team at mkt@manning.com.