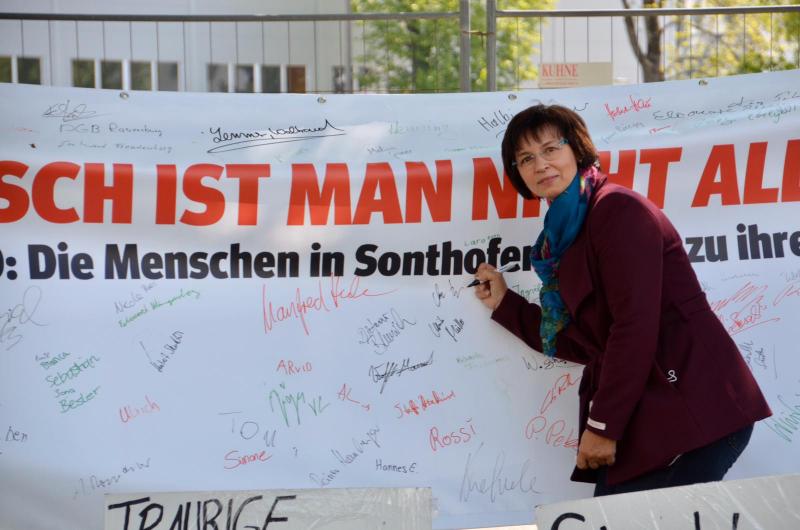 Mueller resolved to place issue on European public agenda Local MEP Ulrike Mueller promised Voith employees in Sonthofen her solidarity and support when she visited their strike picket outside the Voith plant last Wednesday, May 6. The international Voith Group plans to close its facilities in Sonthofen for no obvious economic reason as performance is good. Up to 600 work places are in jeopardy. Voith workers are currently on strike in protest against the planned closure of their workplace. Mueller offered the affected workers her support and is resolved to place the issue on the European public agenda: "I will do everything within my reach to help safeguard these workplaces in Sonthofen. From a European perspective, it is simply unbelievable that in many regions we funnel enormous amounts of money into derelict industries, and here we are faced with a successful and healthy industrial facility that is supposed to be buried alive." Mueller: Investigate if Voith closes healthy plant here and applies for European funding elsewhereMueller promised to examine options to support Voith workers on the European level: "I will investigate if Voith closes a healthy plant here whilst applying for European investment grants in other member states or tries to benefit from other European funding. Voith would not be the first industrial firm to have tried." Voith has failed to give a plausible motivation for the closure of the Sonthofen plant, according to M?ller. The international Voith Group is healthy, and especially at the Sonthofen facility all economic figures suggest solid growth, said M?ller, citing information provided by the Sonthofen employees' representative Birgit Dolde. Mueller: This is as much about our region as about individual livesMueller encouraged workers to keep fighting for the work places: "It is important that you continue to fight with courage and determination for your work places and for the Sonthofen plant. This is not only about your individual lives but also about the interests of our entire region and our tradition of smelting works. I am very proud that none of you has given in to Voith's attempts to break you strike. Keep it going, for you are not alone!" The gear manufacturer had announced premium payments for strike breakers. According to the German labour union IG Metall not a single worker had gone to work, with about 200 employees handing back their letters back to the management. Mueller visited the site together with a group of Sonthofen councillors by invitation of Sonthofen Mayor Christian Wilhelm. In spite of outspoken criticism by employees and local politicians Voith continues with plans to close its facilities in Sonthofen. However, neither is Voith considering selling the plant and production, as vice managing director Dr. Mathias Moertl told local media. --- ENDS --- 2.838 charactersUlrike Mueller MEPEuropean Parliament Bat. Willy Brandt 03M103 60, rue Wiertz / Wiertzstraat 60 B-1047 Bruxelles/BrusselCell-phone 0049-170-4888238Ulrike Mueller has been a Member of the European Parliament since 2014. She is a member of the German Freie Waehler (Free Voters) Party and Executive Vice President of the European Democratic Party EDP. In the European Parliament, she is a member of the Committee on Agriculture and Rural Development, the Committee on the Environment, Public Health and Food Safety and the Committee on Petitions. Beyond her committees, she focuses on education, mobility and womens' rights and representation.