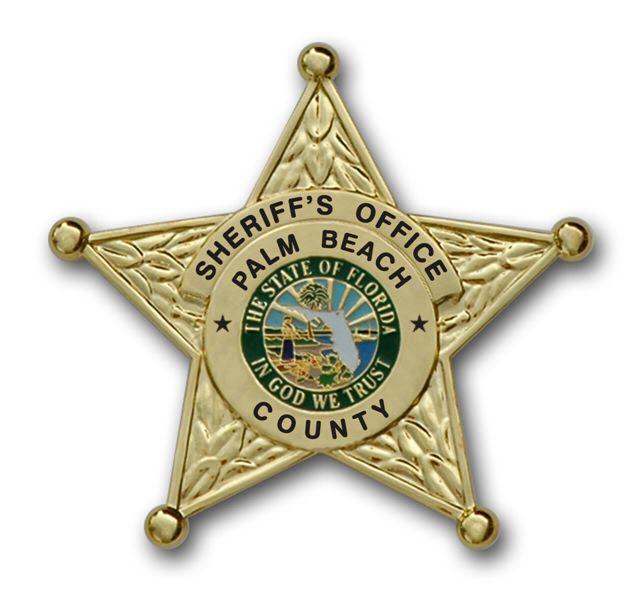 The Samaritan Award is awarded by the Sheriff to a non-Sheriff’s Office Employee for an outstanding act, achievement, or exceptional service to his or her fellow man and community that is relative to the ideals of law enforcement service.

Congratulations to the following members of the community who were honored with Samaritan Awards.

Angelo D. Valderrama
PBSO Reserve D/S Fraga responded to a suicide attempt and observed a man lying on the ledge of the I-95 overpass. When he exited his vehicle, the man climbed over the safety barrier to jump into oncoming traffic below. The man did not respond to communication attempts by Reserve D/S Fraga. By this time, civilian Angelo Valderrama had stopped at the scene. When the suicidal man looked away, R/D/S Fraga and Mr. Valderrama ran over to him, leaned over the barrier and grabbed him by his arm and pants. They wrestled with the man and pulled him back over the barrier. R/D/S Fraga and Mr. Valderrama’s quick thinking and actions not only saved a man’s life, but also prevented potential injury to motorists below.

Jason Simpson Sophia Nelson
Two Pit Bull dogs were running wild and attacked a 14-year old girl who was walking to her school bus stop. One dog bit her lower extremities and the other bit into the side of her neck. The life-threatening wound almost punctured her jugular vein and required emergency surgery. During the attack, Ms. Nelson ran from her home and summoned the aid of Mr. Simpson. They armed themselves with sticks and buckets and engaged the dogs. Both Ms. Nelson and Mr. Simpson placed themselves in imminent danger of attack. They fought off the dogs and were able to pull the girl to safety and call for emergency medical assistance.

Robert Moore
Mr. Moore observed a marked Palm Beach County Sheriff ’s
patrol car driving through his development. He then saw the vehicle come to a stop in the cul-de-sac and noticed what appeared to be distress to the deputy operating the vehicle. Mr. Moore approached the vehicle and found the deputy unresponsive and having a medical emergency. If not for the quick response and notification from Mr. Moore, the deputy could have lost his life.

Burnette Davis Demetria Rolle
A deputy responded to a call involving an autistic child who was found wandering in the road unattended. Upon the deputy’s arrival, the child was sitting in the lap of Ms. Rolle. Ms. Rolle and Ms. Davis were driving home when they witnessed the lost child running in and out of traffic. They saw several vehicles traveling along the roadway at fast speeds, and being concerned for the child, they stopped their car and got the child off of the road. Numerous vehicles drove past this little girl and never stopped to render aid. When other deputies arrived, the child tried to run away from them and Ms. Rolle and Ms. Davis stayed and assisted the deputies in keeping the child calm until a parent or guardian could be located. Ms. Rolle sat on the ground and rocked the child while singing to her. Due to the caring and loving manner in which Ms. Rolle and Ms. Davis looked after this child, deputies were able to concentrate on locating the little girl’s parents.

Dr. Shan recently completed an exhaustive, comprehensive research project regarding the scientific ramifications of reanalyzing blood alcohol samples which have been stored over a long period of time. Following the critical evaluation of the research data, she prepared a scientific manuscript for publication entitled “A Study of Blood Alcohol Stability in Forensic Antemortem Samples.” The manuscript was peer-reviewed, accepted and published in the journal Forensic Science International. Dr. Shan’s research will be directly applicable for use in court cases in which a defense attorney requests the reanalysis of a long-term stored blood sample. Her extensive research data will enhance the current body of blood alcohol research, providing scientific guidelines for the interpretation of expected lower alcohol concentration upon reanalysis after long periods of time, for toxicologists in Palm Beach County and worldwide. Dr. Shan conducted these studies while maintaining her normal workload and completed more cases than any other analyst over the past year. She also testified in over 20 depositions, trials and hearings.

CORRECTIONS DEPUTY SHERIFF OF THE YEAR
D/S Malcolm Foster – West Detention Center
D/S Foster was as- signed to assist the County in the identification and installation of telecommunication devices in the new West Detention Center. Within two weeks he identified 162 phone/fax and data jacks in the new facility for activation. D/S Foster then prepared spreadsheets identifying the location and number of each jack, the type of phone or fax to be installed and whether the phone would have internal or external dialing capabilities. He assisted with the installation and testing of each phone, tracking the numbers and preparing spreadsheets. D/S Foster was also given the responsibility of reconciling computer inventories for the West and Central Detention Centers to identify which computers would be moved. He again completed this task within two weeks. D/S Foster coordinated the installation of over 110 computers, printers and monitors in conjunction with Information Systems. D/S Foster’s attention to detail, adaptability, skills and initiative were instrumental in the successful, on-schedule opening of the West Detention Center.

INVESTIGATOR OF THE YEAR

Agent Joaquin Fonseca – Narcotics
Agent Fonseca is being recognized for his efforts as part of a joint federal and local investigation which led to the arrest of the leader of the Krazy Locos Criminal Street Gang and seven other Krazy Locos members and associates on federal charges of: Conspiracy to Distribute Controlled Substances; Murder in Aid of Racketeering; Attempted Aggravated Assault in Aid of Racketeering; Brandishing and Discharging Firearms During Crimes of Violence; Conspiracy to Transfer Firearms to Others for Use in Crimes of Violence and Drug Trafficking; and Felon in Possession of Firearms. In June, the leader of Krazy Locos was sentenced to life imprisonment plus a consecutive term of 135 years. The remaining gang members were sentenced to an average of 20 years in federal prison, effectively dismantling this very violent street gang. Each time Agent Fonseca con- ducted transactions with these gang members, his life was at risk and he is commended for his extraordinary skill, tenacity and bravery displayed

D/S Siew is commended for his outstanding and proactive work. While on bike patrol; he initiated a traffic stop after witnessing a hand to hand transaction between a driver and passenger. Smelling marijuana, D/S Siew conducted a search and found over 175 grams of marijuana packaged for individual sale. In a second incident, he conducted a “knock and talk” after receiving information about possible drug sales. After observing drugs and money scattered throughout the apartment, D/S Siew secured the residence and conducted a protective sweep, locating an additional suspect. Narcotics seized a handgun, $2,301 in cash, 1.5 grams of crack cocaine, 1.9 grams of Endocet, 15 grams of Xanax and 12 grams of marijuana. D/S Siew’s attention to detail resulted in two felony drug arrests. In a third incident and while on bike patrol, he observed a vehicle burglary in progress and apprehended the suspect without incident. In one month alone, D/S Siew generated 10 felony arrests, seven misdemeanor arrests and nine criminal citations, all of which were proactive and self-initiated.

Volunteer Col. Fahnoe was born and raised in Copenhagen, Denmark. He studied electrical engineering and was a member of the Royal Danish Air Force. After his military service, he was employed by Danish Arctic Contractors, working with the U.S. Air Force in Greenland. In 1993, Col. Fahnoe was elected to the Board of the Florida Sheriff’s Youth Ranches and continues his service to this day. Col. Fahnoe became a PBSO volunteer in 1993 and has proven to be a dedicated and loyal member, earning the respect and support of those he works with. In 1998, he was appointed Volunteer Colonel of Volunteer Services, the highest ranking volunteer in the agency. Col. Fahnoe continues to be the driving force behind the professionalization of the Volunteer Program, mirroring the law enforcement model. Under his direction, the Unit has become an even more vital part of the agency and continues to grow and add more specialty units as the need arises.

RESERVE DEPUTY SHERIFF OF THE YEAR

Reserve D/S Fraga became a Reserve deputy in 2011. He completed his new hire and field training on his own time and without compensation. Reserve D/S Fraga consistently received accolades from his peers and field trainers for his hard work and commitment. He relentlessly volunteered his time to the Reserve Unit on a weekly basis in a variety of law enforcement functions and was hired as a full-time deputy sheriff. D/S Fraga was also presented with a Life Saving Medal earlier in the ceremony for his actions involving a suicidal man who was attempting to jump from the I-95 overpass.

Sheriff Ric Bradshaw states “Our mission is to safeguard the lives and property of the people and communities we serve, to reduce crime, and to enhance public safety while working with our diverse communities to improve their quality of life.”

You can edit or delete your press release Sheriff Ric Bradshaw honors Members of the Community, sworn and Non-Sworn Employees at Annual Awards Ceremony here

01-06-2012 | Politics, Law & Society
Palm Beach County Sheriff's Office
Colonel Joe Bradshaw is nominated for the Claude Pepper Government Lawyer Award.
Colonel Joe Bradshaw is nominated for the Claude Pepper Government Lawyer Award; an award presented by The Florida Bar – Government Lawyer Section. The Claude Pepper Government Lawyer Award recognizes an outstanding lawyer who has made an extraordinary and exemplary contribution as a practicing government lawyer. The award is named in honor of the Honorable Claude Pepper, a Florida attorney, United States Senator, and United States Congressman, who
10-12-2011 | Politics, Law & Society
Palm Beach County Sheriff's Office
Chief Deputy Michael Gauger and Fire Rescue Chief square off in fight against br …
Palm Beach County Sheriff's Chief Deputy Mike Gauger has raised the ante against Fire Rescue Chief Steve Jerauld for their fund-raising challenge this year: whoever scores the most funds gets to be the head of the opposing agency for a day. It's a challenge that popped into Gauger's head as he attended the 2nd Annual "PBSO Green Goes Pink" Celebrity Waiter event held at the Gun Club Cafe in suburban
10-03-2011 | Politics, Law & Society
Palm Beach County Sheriff's Office
Sheriff Ric Bradshaw's Threat Intelligence Unit received the 2011 Florida Gang U …
The Florida Gang Investigator’s Association was formed in 1993, by criminal justice professionals, to pro- mote and facilitate the exchange of gang intelligence and information among those professionals actively involved in the investigation and prosecution of criminal street gangs, prison gangs, extremist groups, supremacist groups and their membership. The main goal of the Association is to effectively and positively impact and ultimately eliminate the effects of gang violence and gang
10-03-2011 | Politics, Law & Society
Palm Beach County Sheriff's Office
Traffic Enforcement with Sheriff Ric Bradshaw
Message from Palm Beach County Sheriff Ric Bradshaw: When my deputies make traffic stops, the main goal is to educate motorists about their driving offenses. It’s not to punish drivers or create hardships for them. These traffic stops impact motorists because they address the challenges to safe driving. We are in the business of creating safe passage through Palm Beach County for millions of residents and visitors. The only way