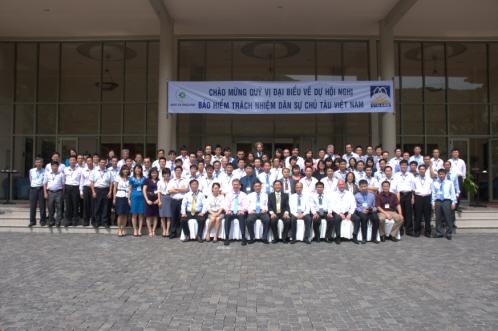 The West of England, in conjunction with VINARE, held a conference for an unprecedented gathering of 130 senior members of the cou

Vietnam’s leading mutual marine insurer, the West of England, in conjunction with VINARE, held a conference for an unprecedented gathering of 130 senior members of the country’s shipping and insurance industries to celebrate its 35th anniversary of providing services to Vietnam’s shipowners last month in Nha Trang.The event featured updates on market conditions and industry developments by several members of the West of England’s management and by leading members of Vietnam’s insurance industry.Trinh Quang Tuyen, Chairman of Vietnam’s general reinsurance corporation, VINARE, gave an overview of Vietnam’s P&I insurance market, Nguyen Xuan Thuy, Deputy CEO of Vietnamese insurance association BaoViet gave a review of co-operation in the market and Dughall Aitkin of Spica Services gave a presentation on nickle ore cargo and the perils associated with this particular trade.Meanwhile, from the West of England, Hong Kong based Director Richard Macnamara gave a historical and financial update on the Club, Quentin Drew spoke about current general issues of interest to the industry and Malcolm Pedley presented a paper on piracy, a particularly topical subject at present.Entering Vietnam During his presentation, Mr Macnamara explained that the West of England entered the Vietnamese market in 1976, at the time of reunification. In 1976, the Vietnamese ocean going fleet consisted of four vessels which were owned by state shipping line Vosco and insured by BaoViet, which at the time was the sole state insurer, and reinsured into the West of England.For the following 20 years, both BaoViet and the West of England insured virtually all of the steadily developing Vietnamese ocean going fleet.In 1996, the Vietnamese insurance industry was re-regulated and as a consequence the exclusive position previously enjoyed by both BaoViet and the West of England came to an end as other Vietnamese and foreign insurers entered the market.The years following 1996 coincided with a very significant expansion in the size of the Vietnamese fleet. Today, 13 Vietnamese insurance companies and four International Group clubs are active in the market.These changes were in many ways welcome because they enabled local ship owners to compare levels of rating and levels of service between their insurers and other P&I providers.Despite this challenge, the West of England has retained its position as the leading International Group insurance provider, insuring approximately 400 of today’s fleet of around 500 ships.As a result, it has significantly increased its overall spread of risk, a key factor from both an underwriting and rating perspective.Success due to continuity and co-operation amidst change Mr Macnamara explained that the company’s success in Vietnam over the last 35 years was due to its ability to provide continuity and close personal co-operation in a changing world.“Our continued success in Vietnam, despite the changes that the country has been through and the current difficult market conditions for shipowners and P&I clubs, is due to our long-term relationship with the market and our understanding of how the market operates,” he said.“It is a relationship which is of considerable value to the Club and our Members and is something which we both greatly appreciate.“I believe our Hong Kong office has also been instrumental in our success in Vietnam because of its relatively close proximity to Vietnam and because the services we are able to offer from that office are unique in the market.”In 1996, the West of England took the conscious decision to expand the range of services performed by the office.Rather than simply providing a claims handling service, the functions performed by the office were expanded to include both underwriting and loss prevention services.With two management board directors stationed in HK, the office was given levels of authority designed to provide Asian owners and in particular those based in China as well as in Vietnam with the same timely quality of service which other owners traditionally expect from clubs based in Europe.“A fully functional office operating in close proximity to our Members and from which they have access to all their P&I requirements is the hallmark of our approach to all our Asian business” says Mr Macnamara. Future growth During the conference, Mr Tuyen outlined government approved plans for continued expansion of the Vietnamese fleet and expressed his appreciation of the ongoing co-operation between the Vietnamese shipowning community and insurance sectors.Looking forward, the West of England is committed to continue to support and co-operate with its members in Vietnam, despite the current difficult market conditions faced by both the insurance and shipping industry.Mr Macnamara concluded: “Vietnam has unveiled plans to increase the size of its ocean going vessel fleet over the coming years and the West of England will continue to support the industry as it strives to meet its ambitious targets.”endsAbout West of England P&I Club: West of England is a member of the International Group of P&I Clubs and has been insuring shipowners for more than 150 years. It is a leading mutual marine insurer which provides liability insurance and other related services to its members. It was initially formed as a British mutual, but today West of England has offices in London, Hong Kong, Greece and Luxembourg and insures more than 5,000 ships.http://www.westpandi.com/Image Line Communications 1A Zetland House 5-25 Scrutton Street London EC2A 4HJ

02-18-2021 | Advertising, Media Consulting, …
Ken Research Pvt Ltd
Vietnam Agriculture Market, Vietnam Agriculture Industry, Vietnam Agriculture Li …
Agriculture has always been of pronounced importance for Vietnam, as feeding the realm’s largest population is not a relaxed task. The Vietnam government has been associate the agriculture industry with a number of policies, demanding to alleviate the output and seeking methods to ensure the sector is developing healthily and sustainably. The Vietnam federal government has been decidedly supportive of agriculture for decades, and there is extensive political consensus as
05-22-2018 | Advertising, Media Consulting, …
Spire Research and Consulting
Vietnam automobile lubricant market beckons
With automotive lubricant demand rising from 2.6 million liters (in 2015) to 4.1 million liters (in 2021), global and regional manufacturers are taking notice of the Vietnam market. How can brands win in this market? Leon Perera, Chief Executive Officer of Spire Research and Consulting, shared his insights on key trends in the Lube Report Asia magazine. With many players competing in the Southeast Asia market for motorcycle lubricants, leaders will
06-12-2017 | Industry, Real Estate & Constr …
ReportsWorldwide
Agrochemicals Market in Vietnam
ReportsWorldwide has announced the addition of a new report title Vietnam: Agrochemicals: Market Intelligence (2016-2021) to its growing collection of premium market research reports. The report “Vietnam: Agrochemicals: Market Intelligence (2016-2021)” provides market intelligence on the different market segments, based on type, active ingredient, formulation, crop, and pest. Market size and forecast (2016-2021) has been provided in terms of both, value (000 USD) and volume (000 KG) in the report. A
09-12-2016 | Politics, Law & Society
ITI-HOLIDAY
Environmental disaster in Vietnam
In Vietnam occurred the biggest environmental disaster since the deployment of Agent Orange by the Americans during the Vietnam War. It happened almost unnoticed by the world while Europe was busy with the refugee crisis and America with the forthcoming presidential elections of the USA. The perpetrators of the environmental disaster come from abroad and are supported by the Vietnamese politicians, similar as it was happen at the Vietnam War. "
09-08-2016 | Tourism, Cars, Traffic
ITI-HOLIDAY
Tourists killed in Vietnam
Vietnam belongs for tourists to the most popular and safest travel destinations in the world, as long as one can believe officially widespread reports. However, this information may not been longer current since a long time. More and more tourists in Vietnam were killed at criminal offenses as well by tragic accidents. These accidents occur mostly due to insufficient checking for compliance with statutory safety regulations by the Vietnamese authorities.
09-18-2012 | Tourism, Cars, Traffic
RNCOS E-Services Pvt. Ltd.
Booming Tourism Sector in Vietnam
RNCOS has recently added a new Market Research Report titled, “Booming Tourism Sector in Vietnam” to its report gallery. Vietnam has become one of the most popular tourist destinations in the South-east region. The country’s tourism industry has been growing unprecedentedly over the past few years with rising domestic as well as international tourists. The travel & tourism industry accounted for 10% of the GDP in the Vietnamese economy during
Comments about openPR
OpenPR ist the nicest and most clearly laid out PR platform I have seen to this day. The press releases are displayed very nicely and clearly and without any unnecessary frills. The updates are fast and the finished release looks appealing and is clearly legible. Even with 16 years of experience one discovers new things from time to time. Congratulations!
Gabriele Ketterl, Director Marketing & PR, Menads