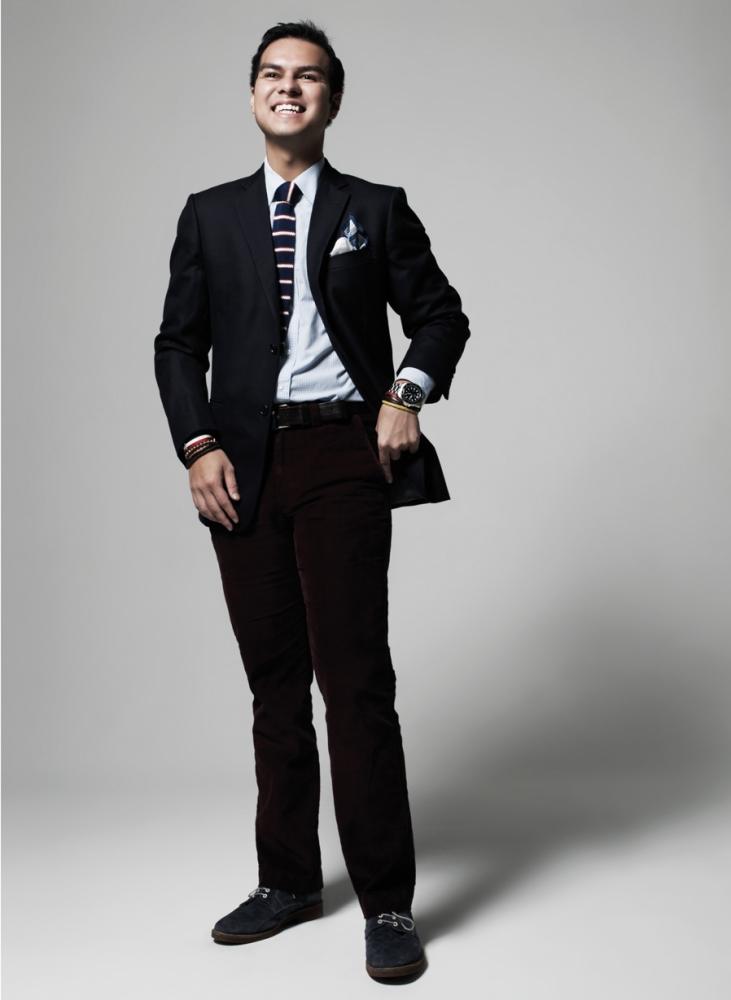 November 25 2011, Kuala Lumpur– After three months of Esquire Malaysia’s “Best Dressed Man Malaysia” competition, one that saw contestants bear the full weight of a panel of fashion experts, winners were announced in dramatic style at Suria KLCC. With prizes totaling RM10,000, it was as exciting a competition as it gets.Esquire Malaysia launched it’s version of the popular Esquire UK’s “Britain’s Best Dressed Real Man” this year, a contest that saw contestants send their pictures looking stylish and fashionable to be critiqued by a panel of judges. They then were invited to come to two judging competitions where they were interviewed by the judges—Esquire’s editor-in-chief Sam Coleman; Mark Wills from Stylekandi, the new premier blog for fashion and style; Nicholas Ng, Esquire brand ambassador and Garbagelapsap fashion blogger; Lim Fang Heng of Wardrobe; Leong Wong, fashion editor for Esquire and Vijay Binwani of Lustro—at the LUSTRO and Wardrobe locales, two of the sponsors. In total, the judges assessed Over forty entrants based on merit and personal style. “It was an amazing turn-out, I was really impressed by the level of fashion knowledge and confidence. It bodes well for the development of men’s fashion in Malaysia, something that Esquire is championing as the foremost men’s fashion and lifestyle title,” said Coleman of the competition. Besides the prizes of a bespoke suit by Wardrobe worth 7,500, the LUSTRO vouchers of RM1000 each and Johnnie Walker Gold Label Reserve bottles worth RM303 each, the final three and the two honourable mentions had a photoshoot that appears in the December Esquire. Rudolph Christopher La Faber, Advertising Creative/DJ, 26, was crowned as Malaysia’s Best Dressed Man and received a Wardrobe bespoke suit and a bottle of Johnnie Walker Gold Label Reserve. “Rudy was incredibly impressive with his style sense, the depth of his knowledge and his full-on passion for men’s style,” said Sam Coleman, Editor-in-Chief of Esquire Malaysia.Ahmad Farhan Asmawar, Executive at Oil & Gas Industry, 30, was the first runner-up and received prizes from clothier LUSTRO and a bottle of Johnnie Walker Gold Label Reserve. “I can really subscribe to Farhan’s style. He has that whole ‘preppy’ summer thing pegged down. It’s fun, carefree, and smart. His look can easily be related to for our climes as we have eternal summers,” exclaimed Leong Wong, Fashion Editor of Esquire Malaysia.Ivan Leong, Managing Director, 27, was crowned the second runner-up and received prizes from clothier LUSTRO and a bottle of Johnnie Walker Gold Label Reserve. “It’s sprezzatura ... as much of care, attention, and detail that Ivan has indulged in his look, it is pure style, clothes that one would wear,” stated Lim Fang Heng ,C.E.O. of Wardrobe.Ricky Saikia, Senior Inbound Manager, 24, and Billy Tea, Political Analyst, 25, both received an honourary mentionThe Best Dressed Man Malaysia is based on a key fashion pillar in the UK, Britain’s Best Dressed Real Man, and has run to much fanfare in London. As such, it asks normal, non-celebrity men to send in their photos, demonstrate their fashion sense, be that with luxury brands or just interesting combinations that spell style. “A very important aspect we want to convey is that style is not about money: it’s simply the best of what every man can afford, imagination and—most importantly—attitude,” said Coleman.Mongoose is Malaysia’s fastest growing media house founded in 1997. They specialise in providing consumer publications (publisher of Time Out KL, Time Out Malaysia Guides, Expatriate Lifestyle, Golf Vacations, The Circular , Al Musafir and Esquire), web solutions, contract sales, contract publishing, creative marketing solutions, event management and PR. With a guiding principle of ‘Communicating with Integrity’, Mongoose utilises its international experience spanning three decades and succeeds in bringing editorial, design, marketing, PR, communications and web-based best practice to Malaysia.Mongoose Publishing Address: Level 36, Menara AmBank, 8 Jalan Yap Kwan Seng, 50450 KL Tel: +603-2166 6650 Fax: +603-2166 6651 Press Contact: Ms. Nazeen Koonda

02-05-2013 | Business, Economy, Finances, B …
Mongoose Publishing
Pet Project Malaysia 2013
To be held on 23rd March, 2013 (from 9am to 6pm) at The British International School of Kuala Lumpur in association with Expatriate Lifestyle, Pet Project Malaysia is BACK and we are once again “Getting Active to Help Save Animals”. Created in 2011, this is an event to unify the community in supporting animal welfare by doing something FUN and proactive. This event is open to the public and we
11-12-2012 | Fashion, Lifestyle, Trends
Mongoose Publishing
Esquire Magazine Announces Malaysia's Best Dressed Real Men 2012
After three months of Esquire Malaysia’s “Best Dressed Man Malaysia” (BDRM) competition, one that saw over 200 entrants bear the full weight of a panel of fashion experts, winners were announced in dramatic style at KL’s hottest new venue, The Circus. With prizes totaling over RM20,000, competition was keenly contested and the final decision agonized over by the expert panel. This is the second year of Esquire Malaysia’s Best Dressed Real
11-12-2012 | Leisure, Entertainment, Miscel …
Mongoose Publishing
Winners Revealed in the Best of Malaysia Awards 2012
After 10 weeks of voting in 16 categories, with a total of more than 70,000 votes cast, the expatriate community of Malaysia have spoken and the results were unveiled tonight at the Official Ceremony for the Best of Malaysia Awards 2012. This showpiece event, organised by Expatriate Lifestyle, Malaysia’s number one expatriate magazine, took place at The Stage in Avenue K, Kuala Lumpur City Centre. Around 250 of the top
11-21-2011 | Sports
Mongoose Publishing
Malaysia Golf Tourism Association Launches New Website
October 20 2011, Kuala Lumpur: The Malaysia Golf Tourism Association (MGTA) this week unveiled a brand new website with comprehensive details on every golf course and tourism tips to help bring thousands more golfers to Malaysia. The website, www.mgta.com.my, contains over five hundred pages of targeted content, including extensive promotions for golf clubs and tour operators offering golf-specific packages, which showcase Malaysia as a unique golf destination to the world. Internationally, golf

05-19-2021 | Health & Medicine
Ken Research Pvt Ltd
Ophthalmology Market in Malaysia, Ophthalmology Industry in Malaysia, Covid-19 I …
Lower Ophthalmology Costs in Malaysia: Ophthalmology cost in Malaysia is estimated to be comparatively less i.e. 40% less or even more than the spending made by a patient on an average for the same treatment in the US and European countries such as the UK, France, Germany and others. Low cost of Ophthalmology in Malaysia allows patients from the other countries to save a significant amount of money while benefiting
05-19-2021 | Health & Medicine
Ken Research Pvt Ltd
Malaysia Ophthalmology Market, Malaysia Ophthalmology Industry, Malaysia Ophthal …
The report titled “Malaysia Ophthalmology Market Outlook to 2025- Increase in Ophthalmic Surgeries & Consultations driven by Increasing Ageing Population Proportion and Ophthalmology Technological Advancements" provides a comprehensive analysis of Ophthalmology Services in Malaysia. The report covers various aspects including market size (Total Revenue, Consultations Revenue, Number of Consultations, Surgery Revenue and Number of Surgeries), Market Segmentations by Clinic Specialty (Multi & Single Specialty), by Private and Public Clinics/Hospitals, By
03-02-2021 | Advertising, Media Consulting, …
Ken Research Pvt Ltd
Malaysia Agriculture Market, Malaysia Agriculture Industry, Malaysia Agriculture …
Agriculture sector is an important sector of Malaysia's economy. There are mainly 3 crops are produced including palm oil, rubber and cocoa. Additionally, country’s farmers produce a number of fruits & vegetables for the domestic market such as bananas, pineapples, coconuts, durian, cabbage, cucumber, long beans, tomato, chilli, okra, spinach, rice, rambutan and others. Country’s tropical climate is extremely favorable for the production of a variety of exotic fruits &
06-12-2017 | Industry, Real Estate & Constr …
ReportsWorldwide
Agrochemicals Market in Malaysia
ReportsWorldwide has announced the addition of a new report title Malaysia: Agrochemicals: Market Intelligence (2016-2021) to its growing collection of premium market research reports. The report “Malaysia: Agrochemicals: Market Intelligence (2016-2021)” provides market intelligence on the different market segments, based on type, active ingredient, formulation, crop, and pest. Market size and forecast (2016-2021) has been provided in terms of both, value (000 USD) and volume (000 KG) in the report. A
05-29-2017 | Advertising, Media Consulting, …
MarketResearchReports.biz
Infrastructure Insight: Malaysia
MarketResearchReports.Biz presents this most up-to-date research on "Infrastructure Insight: Malaysia" Description This report provides a detailed look into the infrastructure sector in Malaysia, including analysis of the state of the current infrastructure, the regulatory and financing landscapes and the major projects in the construction pipeline. The report covers all key infrastructure sectors: roads, railways, electricity and power, water and sewerage, communication, and airports and ports. Summary Malaysia is expected to see some of the fastest
02-05-2013 | Business, Economy, Finances, B …
Mongoose Publishing
Pet Project Malaysia 2013
To be held on 23rd March, 2013 (from 9am to 6pm) at The British International School of Kuala Lumpur in association with Expatriate Lifestyle, Pet Project Malaysia is BACK and we are once again “Getting Active to Help Save Animals”. Created in 2011, this is an event to unify the community in supporting animal welfare by doing something FUN and proactive. This event is open to the public and we
Comments about openPR
9 o'clock: discuss press release with client, 10 o'clock: submit release to openPR, within the briefest possible time release is published and displayed in a prominent place on openPR.de. I am thrilled!
Zehra Spindler, Calypso Now! - Communication Agency