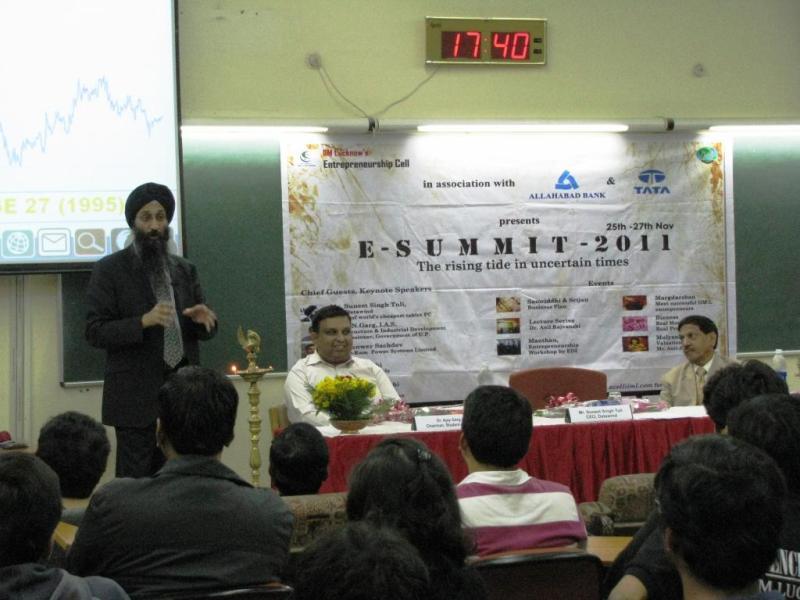 You can edit or delete your press release IIM Lucknow Hosts Entrepreneurship Summit 2011 from November 25-27, 2011 here

02-26-2013 | Science & Education
Indian Institute of Management, Lucknow
IIM Lucknow Students’ Fund, Credence Capital, outperforms the NIFTY sixth year …
IIM Lucknow’s student run fund, Credence Capital, continued its legacy of outperforming the market as it generated a handsome return of 20.10% on its Equities Fund compared to the NIFTY’s 18.6% rise. Even more impressive was the performance of the Derivatives fund, which generated 29.8% returns over this period. This marks the sixth consecutive year of market trumping performance by the fund, which was launched by students of IIM Lucknow
01-29-2013 | Science & Education
Indian Institute of Management, Lucknow
CITI Partners with IIM LUCKNOW on “Demystifying Banking” Workshop
In the first of a workshop series to engage with students to prepare them for the changing demands of the banking industry, Citi India partnered with IIM Lucknow for a “Demystifying Banking” weekend workshop conducted by senior business leaders from Citi for 60 select students from the institute. The first of the workshop series, to build capability amongst young potential talent to prepare them for the dynamic banking world, was
12-17-2012 | Science & Education
Indian Institute of Management, Lucknow
Manfest 2013 website unveiled - 26th Edition of IIM Lucknow’s Manfest Launched
IIM Lucknow today announced the launch of the 26th edition of its Annual International Business Conclave, Manfest 2013. This was done with the unveiling of the event's website. Theme of this edition of IIM Lucknow’s Manfest is “Triumph in Turbulence”. Given the political turmoil, economic instability and environmental duress that has come to characterise our times, it is the need of the hour to applaud those who survive and
05-10-2012 | Science & Education
Indian Institute of Management, Lucknow
IPMX Placements – Batch 2011-2012
The fourth batch of IIM Lucknow’s one year full time, residential programme – International Programme in Management for Executives (IPMX) graduated on March 17, 2012. Institute conducts this programme in its campus at Noida. IPMX batch of 2011-12 had 67 students with quite heterogeneity in their industry backgrounds such as IT, Telecom, FMCG, Infrastructure, Power, Real Estate, Media, Healthcare, Civil Services, Education, Automotive and Banking & Finance backgrounds. IIM Lucknow