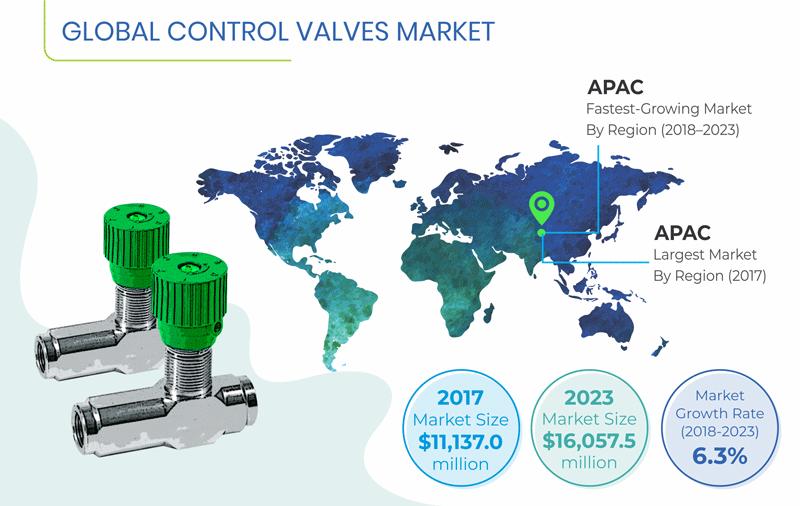 In 2017, the control valves market generated $11,137.0 million and is predicted to attain$16,057.5 million by 2023, registering a 6.3% CAGR during the forecast period (2018-2023). The market is growing due to the rising need for wireless infrastructure to monitor and control equipment, increasing infrastructure projects, surging use in the food & beverage industry, and high energy demand because of increasing population. A physical device which is utilized for controlling the flow of fluid by varying the size of the flow passage with the aid of a controller is called a control valve. Get the sample copy of the report: https://www.psmarketresearch.com/market-analysis/control-valves-market/report-sampleWhen actuation technology is taken into consideration, the control valves market is categorized into electric control valve, manual control valve, hydraulic control valve, and pneumatic control valve. Among these, the pneumatic control valve category held the largest share of the market during the historical period (2013-2017), accounting for a volume share of over 35.0% in 2017, and is further predicted to retain its position during the forecast period. This is because these valves are simple to operate, offer precise linear motion, and can be utilized in a wide range of temperatures. A key driving factor of the control valves market is the rising need for wireless infrastructure for monitoring and controlling equipment in different industries, such as power plants and oil & gas. Companies face difficulty in maintaining different units in large scale oil fields, which has resulted in the increasing usage of wireless infrastructure, including automated valves. These valves can be controlled from the central control unit. Attributed to these factors, various units of oil & gas facilities are being fitted with these valves that are controlled remotely. The rising usage of control valves by the food & beverages industry is another key driving factor of the control valves market. Due to the increase in disposable income, people are increasingly spending their income on processed foods, which, in turn, has led to a growth in the number of food processing plants. These plants make use of control valves in different units. The commonly utilized valves in this industry are check, globe, and gate valves. Moreover, butterfly and ball valves are used by the dairy processing industry for preventing leakage and contamination. Make enquiry before purchase: https://www.psmarketresearch.com/send-enquiry?enquiry-url=control-valves-marketGeographical Analysis of Control Valves MarketTogether, North America and APAC accounted for over 65.0% revenue in global control valves market in 2017. This is attributed to the demand for control valves from numerous industries, for maintaining production and flow rate of fluid. Furthermore, the discovery of new oil and gas fields and rising investments in the oil and gas industry, to cater the surging energy demand, also contribute in the increasing adoption of control valves in these regions.Europe also holds a significant share in the global control valves market, on account of the rising demand for power, with the increase in the economic standards. This has led to the setting up of new power generation plants, which use control valves to maintain the flow of the raw materials.Competitive Landscape of Control Valves MarketThe control valves market is led by several industry players, including Emerson Electric Co., General Electric Company, Flowserve Corporation, Schlumberger N.V. (Schlumberger Limited), and Honeywell International Inc.In April 2017, Emerson Electric Co. acquired Pentair plc's valves & controls business, in a $31,500 million deal. The acquisition serves to grow Emerson Electric Co.'s global footprint in automation and expand its presence in key markets, such as chemical, power, mining, and oil and gas.Some other important players operating in the market are AVK Holding A/S, Bürkert Fluid Control Systems, Goodwin International Limited, KITZ Corporation, Rotork Plc, Velan Inc., Swagelok Company, Armstrong International Inc., Metso Corporation, IMI plc, and Samson AG. For instance, in June 2017, Velan Inc. introduced the new Securaseal R-series cast metal-seated ball valve at the Valve World Expo in Houston, Texas. The new R-series ball valves are suitable for most processes with fluid slurries and high temperatures.Contact: P&S Intelligence International: +1-347-960-6455 Email: enquiry@psmarketresearch.com Web: https://www.psmarketresearch.comAbout P&S IntelligenceP&S Intelligence is a provider of market research and consulting services catering to the market information needs of burgeoning industries across the world. Providing the plinth of market intelligence, P&S as an enterprising research and consulting company, believes in providing thorough landscape analyses on the ever-changing market scenario, to empower companies to make informed decisions and base their business strategies with astuteness.

07-02-2020 | Business, Economy, Finances, B â€¦
P&S Intelligence
Automotive Lithium-Ion Battery Market Outlook and Forecast 2020 due to COVID-19 â€¦
In 2018, the global automotive lithium-ion battery market reached a value of $24.2 billion and is predicted to attain $74.3 billion in 2024, advancing at a 15.9% CAGR during the forecast period (2019â€“2024). The market is growing due to the falling cost of battery and its components and rising electric vehicle production and demand. A rechargeable battery which comprises a positive and negative electrode that are contacted by a chemical called
07-02-2020 | Advertising, Media Consulting, â€¦
P&S Intelligence
Seed Treatment Market is expected to grow in coming years post COVID-19 Outbreak
The agriculture industry is of great importance, and there is a pressing need for increasing productivity and efficiency in agricultural fields for catering to the need of the swiftly growing population across the globe. Governments across the globe are focusing on creating awareness among farmers, by launching several initiatives, about advanced technologies, including crop protection materials. These materials aids in keeping insects and pests away, in turn, enhancing crop yield.
07-01-2020 | Business, Economy, Finances, B â€¦
P&S Intelligence
What are Key Factors Driving Progress of U.S. Medical Peer/External Physician Re â€¦
The increasing incidence of medical malpractices and negli-gence in the U.S. over the last few years has led to the crea-tion of strict guidelines for medical review process in the coun-try. Moreover, there has been a huge rise in the number of healthcare centres and physicians in the country having limited expertise in conducting reviews, in the past years. Due to these factors, the requirement of medical peer/external physi-cian review
07-01-2020 | Business, Economy, Finances, B â€¦
P&S Intelligence
E-Bike and Scooter Demand and Trend in North American Region - Business Revenue â€¦
The North America electric scooters and motorcycles market attained a size of $154.8 million in 2018, and it is predicted to progress at a CAGR of 28.4% during the forecast period (2019â€“2024). The factors driving the growth of the market are government incentives and federal tax credits, low maintenance cost of such vehicles, and emergence of sharing services. Further, the amount of investments being made in e-two-wheeler manufacturing companies is