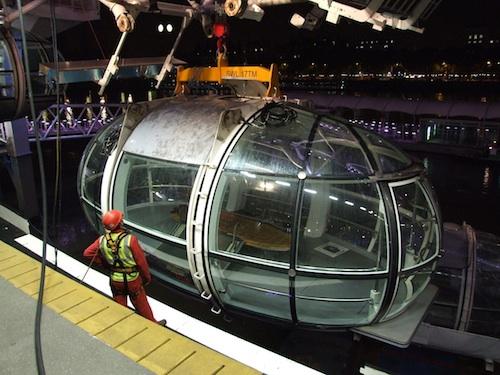 Since 2009, The EDF Energy London Eye, the UK's number one paid-for visitor attraction, has been going through a £12.5 million upgrade that is set to further improve the visitor experience, increase environmental credentials and ‘future proof’ one of the UK’s most iconic landmarks for years to come. The work will be completed in time for the 2012 London Olympics. This complex project, which involves removing each of the 32 10tonne capsules in turn, has over 20 companies working on design, planning, sub-projects and logistics. The owners of The EDF Energy London Eye, Merlin Entertainments Group were committed, wherever possible, to use UK businesses and this has been achieved thanks to the enormous amount of UK industrial expertise.Companies such as Isle of Wight-based LCM Systems have played a small, but crucial part in the process. The company is known throughout the world for designing and manufacturing a wide range of load cells for a variety of lifting and weighing applications. Its part in the upgrade programme involved providing a shackle load cell and TR150 hand-held indicator to ensure that when a 10tonne capsule was removed from the cantilevered observation wheel, it could be safely and securely lowered on to the pontoon that was waiting to transport the pod up the Thames.The capsules are attached to wheel via 4 pins that need to be extracted before the capsule can be removed. The process involved attaching the load cell onto an air hoist that was in turn attached to the capsule. Air was driven into the hoist until the load cell gave a reading of 10.5tonnes on the indicator, monitored on the ground by an experienced engineer. Once engineers were satisfied that the capsule was secure and could be lowered safely, the pins were extracted and the pod began its controlled descent. Without a safe and reliable load cell, the weight of the capsule would be unknown.Mark Robinson, Technical Operations Manager at EDF Energy London Eye, has been very pleased with the performance of the LCM load cell. "Although a relatively small part of the overall operation, it is vital that the load cell is reliable and accurate. We have also found it is easy to install and operate, with the digital indicator enabling us to monitor the load from the ground."The SHK-B is one of an innovative range of shackle load cells designed specifically for lifting and weighing applications in harsh or rugged environments. LCM Systems can provide the cabled versions with Crosby shackles as standard or as an option with Greenpin shackles. Safety is paramount for the demanding applications in which these shackle load cells are used and the use of high-quality shackles is essential to comply with safety standards and regulations as well as to maintain integrity.All shackle pins are forged from high tensile carbon steel and proof loaded to 150% of the normal rated load. The products are sealed to IP66 to protect against harsh weather conditions.The TR150 handheld load indicator used in the project is a versatile and intuitive precision instrument. It is a portable, environmentally sealed unit that has been specifically designed for accuracy and versatility.With only six keys to access, the operator can easily set up the unit and the configuration menu enables the setting of a tare value, display resolution, filter rate, auto power off and selection of low power mode – all through the front panel. This menu option also enables the user to tailor the instrument’s response to the application. The TR150 accepts an input range of up to 50mV/V and two separate ranges are available which means that the instrument can both read and display two separate parameters. In each range all the variables can be set, including zero and filtering. - ends -130LCM November 3, 2011LCM Systems are designers and manufacturers of high quality load cells, load pins and load monitoring instrumentation systems. We can help solve your application problems with one of our standard products or with a bespoke solution. We pride ourselves in building a successful and close working relationship with all our customers, with the aim of establishing a strong commercial and technical link, to the benefit of both companies.Enquiries: Steve Sargeant. LCM Systems Ltd. Unit 15, Newport Business Park, Barry Way, Newport, Isle of Wight. PO30 5GY. Tel: +44 (0)1983 249264 E-mail: steve@lcmsystems.com http://www.lcmsystems.com Twitter: http://www.twitter.com/lcmsystemsUK Press Contact: Eileen Holmes-Ievers. In Press Public Relations Ltd. St John's Chapel, High Street, Lambourn, Berkshire. RG17 8XL. Tel. +44 (0)1488 674200 E-mail: eileen@inpress.co.uk http://www.inpress.co.uk. Twitter: http://www.twitter.com/InPressPR

04-23-2021 | Industry, Real Estate & Constr …
Millboard
Millboard London Showroom reopens
Following the relaxation of lockdown laws, Millboard’s London Showroom on Clerkenwell’s Goswell Road has reopened for business. Callers to the centre are once again able to view the company’s ranges of high-end decking and cladding, subject to pre-booking their visit and the usual social distancing and mask-wearing rules. Showroom Manager Trevor Shephard is delighted to be able to welcome visitors once more. He said ‘Millboard has actually done very good business
03-25-2019 | Health & Medicine
Smilepod
Smilepod :– Making London Smile!
People often say it is hard to find a dentist you like in London. You want a convenient London Dentist, which provides friendly and professional dental care in an inviting and caring environment. This is the ethos behind Smilepod. All of their 6 centrally located dental practices are within 5 minutes of a tube station. They understand that Londoners are busy and don’t want to miss work to see the
02-19-2018 | Advertising, Media Consulting, …
FirstRank Digital Marketing
SEO Agency London
FirstRank is a leading digital marketing agency based in London, offers Website Development, Search Engine Optimization and Social media marketing service. we provide seamless growth for your business with our digital marketing services and solutions. Our highly competent teams are constantly adding the smile to the faces of our clients. Digital marketing is an investment and our digital marketing Agency focus on returns. In 2012, we started as a SEO company
05-21-2012 | Health & Medicine
Otto Bock HealthCare GmbH
London 2012
Off to the Paralympics with 15,000 spare parts Ottobock, the medical equipment company, is preparing for a large-scale operation at the Paralympic Games in London (29 Aug. to 9 Sept. 2012). Some 4,200 athletes are expected at the second largest sports event in the world. In order to ensure technical service for them, Ottobock is sending 78 orthopaedic technicians from 20 countries. The first vehicles are already transporting 9
11-23-2010 | Business, Economy, Finances, B …
Propacea Limited
London House Prices Fall
Property agents in London have reported a record gap between asking prices and actual sales prices. According to analysis by agents Douglas & Gordon, which compared the asking prices on the Rightmove website with those logged on the Land Registry, there is now an average £79,000 gap between the two figures. This compares with a gap of £6,574 in 2003. Buyers now routinely offer £50,000 or more beneath
07-15-2009 | Logistics & Transport
CMB NV
SALE OF MINERAL LONDON
CMB confirms that Bocimar International has sold the Capesize vessel Mineral London (2006-173,949 dwt). The net sale price amounts to USD 60.2 million. At the time of delivery of the vessel, scheduled to take place in the course of the fourth quarter 2009, a capital gain of approximately USD 5.7 million will be realised. CMB, Compagnie Maritime Belge, is a maritime group with its registered offices in Antwerp. The company was
Comments about openPR
I can't but agree to the positive statements about your portal: easy to use, clear layout, very good search function, and quick editing!
Jens O'Brien, Borgmeier Media Communication