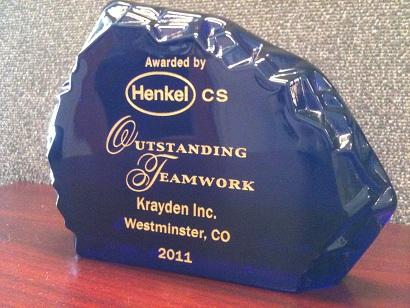 DENVER — October 2011 — Krayden, Inc., a leading distributor of engineered materials, announces that it has received an Outstanding Teamwork 2011 Award from Henkel Technologies. The award reiterates Krayden’s ongoing dedication to world-class customer services.Krayden was selected for the award for its exemplary knowledge of and adherence to Henkel’s policies. Criteria include adherence to case quantities and lead times, and responding to inquiries in a timely manner. “It is a pleasure to work with such a professional group of dedicated people, and we are honored to be able to present Krayden with this distinction. We appreciate Krayden’s commitment to our customers and look forward to continued mutual success,” said Lara Cote, Henkel Technologies Director Customer Service.Krayden President Wayne Wagner commented, “It is a team effort from both Krayden and Henkel to offer the highest quality of customer service to our customers. The support we receive from Henkel Technologies’ sales and support staff is what really makes our relationship such a success.”Krayden has been an authorized distributor of Henkel’s leading brands of Ablestik™, Acheson™, Emerson & Cuming™, Hysol®, Loctite®, Frekote® and Multicore® for more than 10 years. With a broad portfolio of materials including surface mount adhesives, conductive inks, advanced flux chemistries, traditional tin-lead and high-performance lead-free solder solutions as well as CSP underfills and board protection materials, Henkel’s advanced formulations ensure maximum processability and reliable in-field performance. Krayden is a technical problem solving distributor, specializing in adhesives, sealants, coatings, solvents, various types of chemicals, solder and lead-free solder. Krayden serves the electronics, aerospace, transportation and energy industries (solar, oil and gas) as well as OEM manufacturers. With numerous locations, the company provides distribution throughout North America including Canada and Mexico. For more information about Krayden, visit www.krayden.com.For more information about Henkel, visit www.henkelna.com.About Krayden, Inc. Krayden, Inc. is a stocking distributor featuring adhesives, sealants, encapsulates, coatings, solder, solder chemicals, release agents, dispensing equipment and supplies with locations throughout the United States and five locations serving Mexico. The company has been named Dow Corning Electronics’ Distributor of the year in 2008 2009 and 2010, and represents only the leaders in the engineered materials industry. Krayden is fully supported by its manufacturers as well as committed to updating its customers' about new products for their applications. The company’s inventory is constantly being monitored for quality and shelf life at all locations. Krayden has the ability to customize its inventory based on customer’s requirements, and it prides itself on having technical knowledge of its product lines. For more information, visit Krayden, Inc. at www.krayden.com.1491 W. 124th Ave. Denver, CO 80234Press Contact: Tracy Hall, Global Marketing Manager

08-27-2013 | Business, Economy, Finances, B …
Krayden Inc.
Dow Corning Gold Award Goes to Krayden Again
Dow Corning has named Krayden Inc. as the recipient of the Gold Level Distributor in Electronics. This commemorates the first time this prestigious award has been bestowed upon a single distributor 5 times by Dow Corning North America Electronics Channel. “Something we have always prided ourselves on is that we may not have the most product lines, but one thing we know is that we have the best. It’s all in
06-05-2012 | Industry, Real Estate & Constr …
Krayden Inc.
Krayden Appoints Senior Account Manager for Business Venture in Canada
Krayden, Inc. (krayden.com) has appointed Christopher G. Miller as Senior Account Manager for Krayden Canada Inc. Miller’s appointment represents Krayden’s continued growth in this territory as the company is emerging as a leading provider in Canada. Miller is responsible for building sales for Krayden’s new business venture in Toronto, Canada. He is on the front line working with customers and the new technology being developed in thermal management and conductive
03-21-2012 | Industry, Real Estate & Constr …
Krayden, Inc.
Dow Corning Awards Krayden, Inc. Distributor of the Year 2011
Krayden, Inc. (http://krayden.com), a Dow Corning Distributor of Adhesives and Sealants for North America, has been named “Dow Corning Electronics America Distributor of the Year,” for the fourth consecutive year. The award represents Krayden’s exceptional performance in the distribution of engineered materials used in electronics manufacturing, Dow Corning announced in February. The top distributors in the market vie competitively for the prestigious award annually, and view the recognition by Dow Corning
03-14-2012 | Industry, Real Estate & Constr …
Krayden, Inc.
Krayden Strengthens Its Sales Team in Mexico
Krayden, Inc., a leading distributor of engineered materials, announces that Omar Barajas has joined its sales team in northern Mexico effective immediately. Based in Sonora, Mexico, Omar is the company’s newest sales representative. In this position, he is responsible for growing sales in northwestern Mexico, including Sonora, Sinaloa and Baja California. He provides technical and sales support for customers, and oversees sales strategies, growth potentials and market analysis in his territory. Omar
02-27-2012 | Industry, Real Estate & Constr …
Krayden, Inc.
Krayden Continues Expansion with New U.S. Sales Representative
DENVER — February 2012 — Krayden, Inc., a leading distributor of engineered materials, announces that Michael Olesen has joined its sales team in the United States effective immediately. Michael is the company’s newest sales representative. In this position, he is responsible for proactively focusing on sales goals, as well as providing both technical and sales support for regional customers to expand sales throughout Houston and Louisiana. Additionally, he oversees sales strategies,
12-13-2011 | Industry, Real Estate & Constr …
Krayden, Inc.
Krayden, Inc. Opens New Warehouse in Florida
DENVER — December 2011 — Krayden, Inc., a leading distributor of engineered materials, has opened another new location in Melbourne, Fla. The new warehouse marks Krayden’s fifth expansion in the last two years. Due to recent growth, Krayden has outgrown its current facility in Melbourne, leading to the opening of the new, larger warehouse. This facility enables Krayden to service Central and South America as well as the Caribbean territory while
Comments about openPR
OpenPR ist the nicest and most clearly laid out PR platform I have seen to this day. The press releases are displayed very nicely and clearly and without any unnecessary frills. The updates are fast and the finished release looks appealing and is clearly legible. Even with 16 years of experience one discovers new things from time to time. Congratulations!
Gabriele Ketterl, Director Marketing & PR, Menads