Signing of a Memorandum of Understanding between Gaimin.io & Space Misfits 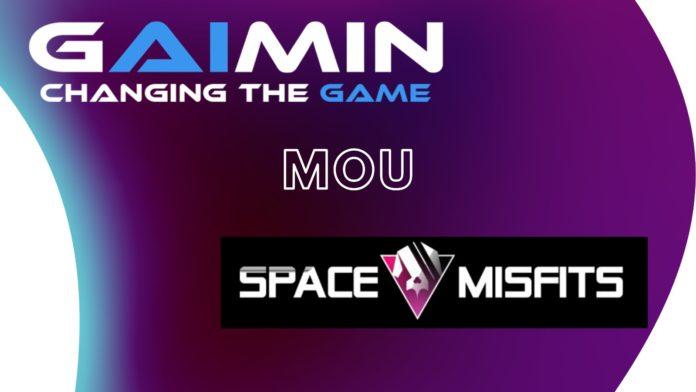 March 24th, 2020, in Stockholm, Sweden. Gaimin.io announces the signing of a Memorandum of Understanding (MOU) with Space Misfits (SM).Synergistic partnerships with the developing of both infrastructure and operational elements are fundamental to Gaimin's strategic plans and the latest MOU is truly exciting in its ramifications.The latest MOU demonstrates the synergy and potential for the two businesses to collaborate and to develop top-rate services to the gaming industry, and gamers in particular. Gaimin.io and Space Misfits see likenesses of innovation, and community as well as mutual compatibility.The momentum provided by building strategic and operational alliances with parallel businesses remains at the core of Gaimin's approach to rapidly developing, and then sustaining business growth.Gaimin brings computational power via gaming machines to GPU hungry real-world applications. Gaimin has attracted considerable interest with its model of rewarding the gamer, whose machine is being used, and satisfying the demands of the end-users of the computational power. Think 3D graphics, research, simulations, blockchain mining, and so many more applications. Gaimin is poised to move to the next level based on solid foundations and with key personnel and partner businesses ready to meet the challenges ahead."When Missfits approached us, we could see the potential of working together and the long term benefits for both companies" Calvin Adamus the CPO of Gaimin was quick to point out. What Missfits will offer our members is truly high quality and will also add fun and enjoyment to the platform.Sam Stebbins, the CEO of Missfits, was quick to add "We immediately saw the synergy for both companies when we looked into the Gaimin project. In ethics, and values as well as commercially, we saw that with Gaimin, the platform will provide our user base with additional tools and the unprecedented ability to generate additional income from simply leaving their machines on when not gaming. This can not only sustain their passion, but build upon it without any effort whatsoever. This is a leap forward that the gaming community hadn't expected to be fulfilled and we are incredibly enthusiastic to be moving forward with Gaimin."About Space Misfits: Space Misfits aim to have gamers own their accounts and the in-game assets that they have gathered over the time they play games. They can also give gamers the opportunity to earn their time and monetary investment back. This is done by providing a safe and secure marketplace to sell in-game assets by giving gamers true ownership of these assets. Essentially, gamers can develop a business within the Space Misfits game(s), and through the non-fungible-tokens (NFTs). Gamers and the gaming community, and delivering innovative services are central to Space Misfits mission.Media Contact Company: Blockcast.cc Media Contact: Jenny Zheng Title: Editor Contact Number: +65 9883 2707 Email: contact@blockcast.cc Country: SingaporeAbout Gaimin.io (GMRX): The Gaimin.io project is a blockchain-powered gaming platform. It harnesses the world's largest supply of distributed GPU processing power - namely the 1.3 billion gaming PCs in the global gaming community. Gaimin offers rewards for gamers in return, both in the form of tokens to buy in-game assets and a return on the dollar for the use of the gamer's GPU. The computational power generated can then be directed to customers for essential computation, rendering and modeling functions, blockchain mining, and more.

You can edit or delete your press release Signing of a Memorandum of Understanding between Gaimin.io & Space Misfits here