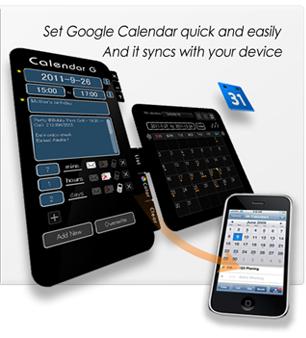 27 October 2011-- Egg-On-Egg Corporation one of the web software developers released a new application "Calendar G" for Google Calendar. Calendar G is a handy desktop tool to edit Google Calendar. It helps users from opening a browser and handling confusing menus. It is a freeware with advertisements but they can be removed with an Address Key(US$5) offered by Egg-On-Egg Corporation.In the last decade Google Calendar became one of the personal necessities not only in the company but also in the personal life. This movement is being accelerated by the spread of smartphone these days. Reflecting such circumstance, there is a growing body of request "More Handy" "More Quick". Calendar G might have the answer for these demands.Calendar G's first window is quite simple. There are only five textfields. They are Date, Beginning time, Ending time, Title and Description. It's enough for users who input one's schedules. There is a area to input the Google Calendar's reminders under the textfields. The Google Calendar's reminder sends Email/SMS or pop-ups a dialog box to notify the user ahead of time. Placing this area in the first window is one of the Calendar G's unique features.Clicking the button "View" on the right, a side window comes up. The calendar-view and the list-view can be selected in this side window. The existing events can be updated or deleted using this side window. As an aside, the appearance of the side window is a kind of door action. Users may get a brief glimpse of developer's obsessiveness.Calendar G is an application created with Adobe AIR known as an animation software. Calendar G seems to inherit characteristics from Adobe's tool in its graphical design and motions. In general the installation of AIR application need the AIR runtime as a plug-in software. But using the Express Install provided at the Egg-On-Egg Corporation's web site, Calendar G can be installed seamlessly without troublesome tasks.Egg-On-Egg Corporation mainly provides the applications those assist Google's web services (i.e., Gmail, Google Calendar). Some of them are freewares with advertisements and some are sharewares. They offer Address Key -- a kind of license key -- to remove the advertisements and restrictions. Of special note is the Address Key is common for all Egg-On-Egg Corporation's applications. Here are the brief information about their applications.--- Synchronicity : An Editor and Backup-tool for Gmail address book. --- Photo Drag : Icon entry tool for Gmail address book. --- XCross Drag : Address exchange tool for Gmail address book.Why is the Address Key is common? Because it is the key not for the application but for the Google account. If one has a Google account abcd@google.com, an Address Key is created to the Google account. It is available to log in Google services using Egg-On-Egg Corporation's application. As of today 10/27/2011, Egg-On-Egg Corporation provides up to two Address Keys with one purchase (US$5).Egg-On-Egg Corporation is the software company. It mainly provides Adobe AIR applications those related to Google web service. Its all applications are adapted in English, Chinese and Japanese , and also available for Google Apps,too. URL:http://www.egg-on-egg.com/. Email:(use the form of the web site)Seishin 1-1 Edogawa Tokyo Japan Zipcode:134-0087