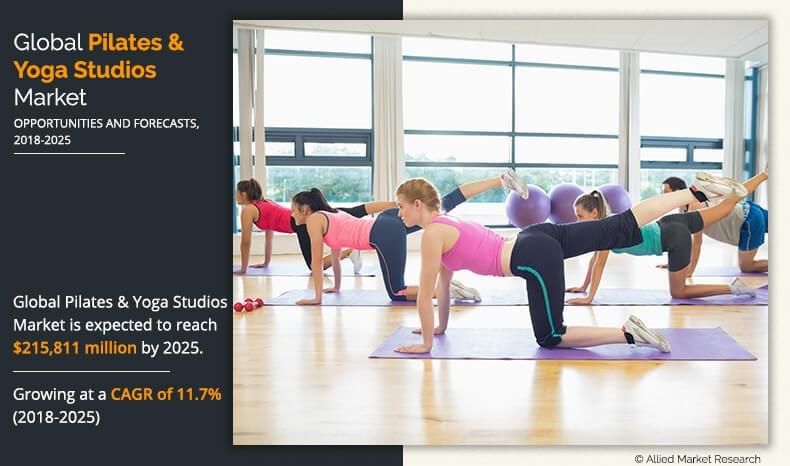 According to a new report published by Allied Market Research titled,"Pilates & Yoga Studios Market by Activity: Global Opportunity Analysis and Industry Forecast, 2018 - 2025,"the Pilates & yoga studios market size was valued at $87,926 million in 2017, and is projected to reach $215,811 million by 2025, growing at a CAGR of 11.7% from 2018 to 2025. U.S. held nearly two-fifths share of the global market in 2017.Download Sample Copy Of Report@https://www.alliedmarketresearch.com/request-sample/4310Pilates & yoga studios can be defined as be a single room or a structure with multiple classrooms equipped with props and equipment used for Pilates and yoga. It can also be defined as the buildings or other places where Pilates & yoga classes can be conducted. Pilates is a form of exercise that aims to strengthen muscles while improving body flexibility and postural alignment, while yoga is an entire compendium of exercises designed to stimulate and rejuvenate the body and mind.The top factors influencing the growth of pilates & yoga studios market include increase in health consciousness, rise in obese population across world, initiatives by government to promote healthy lifestyle, health benefits associated with yoga & Pilates and celebrity endorsement & promotion. The major factor that limits the growth of the Pilates & yoga studios market is the presence of numerous substitutes.Send Me Enquire About Report@https://www.alliedmarketresearch.com/purchase-enquiry/4310Increased awareness regarding health & fitness is expected to significantly drive the growth of the pilates & yoga studios market. Although fitness consciousness is higher in urban areas, the market is expected to witness steady growth in semi-urban areas of the developing economies.A significant rise in the global obese population supplements the growth of the Pilates & yoga studios market. Inactive lifestyle and dysfunctional diets cause obesity, which results in increased prevalence of cardiovascular and lifestyle diseases. Thus, rise in obese population is expected to fuel the growth of the Pilates & yoga studios market.The governments of developed countries are constantly in the process of conceptualizing and establishing effective and timely healthcare programs. Developing countries indicate a significantly growing trend of healthcare offerings across all sectors. The allowances related to employee fitness is expected to experience an increase in future. This is anticipated to boost the business of Pilates & yoga studios, as a significant portion of the employee income would be invested in studio membership. This in turn is expected to drive the growth of the Pilates & yoga studios industry.Yoga and Pilates provide both physical and mental benefits to participants. These help improve flexibility, balance & posture, and range of motion. Furthermore, it reduces stress through controlled breathing and mental focus. This results in improved sleep cycle and helps avoid mood swings, depression, and other disorders.Celebs such as Robert Downy Jr., Keanu Reeves, Julia Roberts, Demi Moore, Charlize Theron, Kim Kardashian, Madonna, and others have spoken about Yoga and how it has been transforming their health and lifestyle. This is influencing both young and middle-aged people to practice yoga and Pilates owing to the associated benefits.However, presence of other alternatives such as multi-specialty gym, fitness centers, and therapy classes significantly hampers the pilates & yoga studios market size. Although yoga has become popular among people across the world, the presence of fitness centers, gyms, and other fitness facilities (dance, martial arts) are competing aggressively with the yoga studios.Based on region, the market is analyzed across North America, Europe, Asia-Pacific, and LAMEA. Asia-Pacific region is witnessing the highest market growth. Asia-Pacific is studied across China, India, Japan, and rest of Asia-Pacific. In India, Yoga offers a spiritual and therapeutic experience besides its physical benefits. Cities like Rishikesh also known as the birthplace of Yoga, Goa, and Kerala offer a multitude of Yoga schools and retreats that cater to various styles of Yoga and across various budgets. According to Chinese Academy of Social Sciences (CASS), there are 10,800 yoga schools across China with some educating thousands of yoga practitioners. The number of yoga schools in China is expected to increase with a city's economic development, as people are concerned about their health.Key findings of the Pilates & Yoga Studios Market: In 2017, Asia-Pacific was the highest contributor toward the market, growing at a CAGR of 12.9% from 2018 to 2025. In 2017, the yoga classes segment accounted for nearly half of the global Pilates & yoga studios market share, and is estimated to grow at a CAGR of 13.0% from 2018 to 2025. The merchandise sales segment is expected to grow at a CAGR of 8.8% during the Pilates & yoga studios market forecast period. In 2017, the U.S. accounted for nearly 50% of the market, and is estimated to grow at CAGR of 11.0%. In 2017, India accounted for a prominent market share, and is anticipated to grow at the highest CAGRs of 14.8%.Read More At: https://www.alliedmarketresearch.com/pilates-and-yoga-studios-marketKey leading players operating in the Pilates and Yoga Studios industry are Alona Pilates, Authentic Pilates Ltd., Body & Soul yoga club(China), Core Pilates, Fitness Firm Yoga and Pilates Studio, Fitness Unlimited, Flex Studio, M Pilates+Yoga, Pilates Plus LLC., and Studio Pilates & Yoga, LLC.5933 NE Win Sivers Drive, #205, Portland, OR 97220, United States. Int'l: +1-503-894-6022 Toll Free: +1-800-792-5285 Fax: +1-800-792-5285 help@alliedmarketresearch.comAllied Market Research, a market research and advisory company of Allied Analytics LLP, provides business insights and market research reports to large as well as small- & medium-scale enterprises. The company assists its clients to strategize business policies and achieve sustainable growth in their respective market domain.

You can edit or delete your press release Pilates & Yoga Studios Market Expected to Reach $215,811 Million by 2025 here