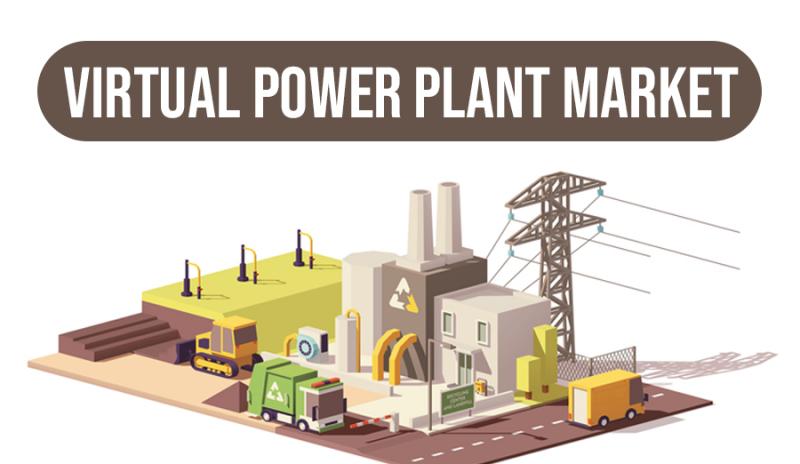 The capacity of renewable power projects is growing around the world. In fact, the renewable sources of energy are the fastest growing energy resources and grew at a rate of 7.6%, in terms of capacity, in 2017 as compared to 2016. Furthermore, the share of renewable sources of energy in power generation is projected to reach 20% by the end of 2035. This expansion in renewable energy projects is ascribed to the ambitious renewable energy targets set by emerging economies including India and China. The development of renewable power projects is expected to generate a large amount of distributed energy that will need well developed energy evacuation infrastructure for supporting reliable flow of electricity.Request free sample copy of market report at: https://www.psmarketresearch.com/market-analysis/virtual-power-plant-market/report-sampleAs per a study conducted by P&S Intelligence, in 2017, the global virtual power plant market generated $1,975.1 million and is predicted to advance at a 18.6% CAGR during the forecast period (2018-2023).Virtual power plants are based on 3 types of technologies, namely supply side, mixed asset, and demand response. Out of these, the demand response technology was the most in demand during 2013-2017 and the situation is projected to remain the same during the forecast period as well, in terms of revenue generation. Under this model, incentives such as low tariff are offered to the consumers of electricity by power generation utilities for reducing their power consumption during peak hours. This is aids the effective management of demand-supply scenario of power at grid level, at a certain point of time.A major driving factor the demand for virtual power plants is the aging and inadequate power evacuation infrastructure. Power evacuation infrastructure is characterized by distribution network and power transmission; however, in most of the countries, power transmission network is obsolete and not capable of accommodating the intermittent flow of electricity which is supplied by renewable power projects. Furthermore, high transmission and distribution losses and frequent network failure lead to revenue loss for power utilities. The power transmission network is highly inadequate especially in developing countries and is not capable of catering to the growing need for energy, which is resulting in the rising requirement for virtual power plants.Make enquiry before purchase at: https://www.psmarketresearch.com/send-enquiry?enquiry-url=virtual-power-plant-marketThe Virtual Power Plant Market report offers comprehensive market segmentation analysis along with market estimation for the period 2013-2023.Based on TechnologyDemand response Supply side Mixed asset Based on ConsumerIndustrial Commercial Residential Electric vehicles Geographical AnalysisNorth America U.S. Canada Europe Germany France U.K. Italy Asia-Pacific (APAC) China Japan Australia South Korea Latin America (LATAM) Brazil Mexico Middle East and Africa (MEA) Saudi Arabia U.A.E. South AfricaContact: P&S Intelligence Toll-free: +1-888-778-7886 (USA/Canada) International: +1-347-960-6455 Email: enquiry@psmarketresearch.com Web: https://www.psmarketresearch.comAbout P&S IntelligenceP&S Intelligence is a provider of market research and consulting services catering to the market information needs of burgeoning industries across the world. Providing the plinth of market intelligence, P&S as an enterprising research and consulting company, believes in providing thorough landscape analyses on the ever-changing market scenario, to empower companies to make informed decisions and base their business strategies with astuteness.

You can edit or delete your press release How is Increasing Capacity of Renewable Power Projects Driving Virtual Power Plant Market? here

07-17-2020 | Business, Economy, Finances, B …
P&S Intelligence
Data Center Colocation Market | Covid19 Impact Analysis | Business Outlook, Grow …
Large enterprises are currently the larger users of colocation services, on account of their desire to decrease their operational expenses and increase focus on their more-critical areas. This is being done by giving the responsibility to house their expensive information technology (IT) hardware, such as routers, modems, and servers, to data centers, which also let them store huge amounts of data. Get the Sample Copy of this Report at:https://www.psmarketresearch.com/market-analysis/data-center-colocation-market/report-sample In addition, as
07-16-2020 | Business, Economy, Finances, B …
P&S Intelligence
How Surging Interaction Through Enterprise Messaging Applications Driving Key Ma …
In the wake of the rising cyber attacks, adoption of cloud technologies, and focus on digital transformation, the need to meet the associated regulatory compliance is increasing around the world. Health Insurance Portability and Accountability Act (HIPAA), Payment Card Industry Data Security Standard (PCI DSS), General Data Protection Regulation (GDPR), and Federal Information Security Management Act (FISMA) are the various acts and standards which govern cyber security. Get the Sample Copy
07-16-2020 | Business, Economy, Finances, B …
P&S Intelligence
Digital Out of Home Market Growth Declines, However COVID-19 Pandemic May Bring …
Digital out of home or DOOH refers to digital media displayed in outdoors that is accessible to the public and used for advertising and marketing purposes. It is displayed via electronic displays in a variety of formats, excluding radio and TV advertising. It consists of digital billboards, out of home (OOH) displays, digital signages, LEDs, and screen technologies. Request Sample Copy of Report : https://www.psmarketresearch.com/market-analysis/digital-out-of-home-market/report-sample The digital out of home market is
07-16-2020 | Advertising, Media Consulting, …
P&S Intelligence
Medical Device Outsourcing Market - Future Developments, Trends, and Opportunity …
The healthcare industry is witnessing rapid growth because of the surging prevalence of diseases all across the world. The medical industry does not only deal with drugs and therapy, but medical devices are an important part of it. Attributed to this, the medical devices industry is registering swift growth as well. In 2018, the global medical devices market attained a value of $425.5 billion and is predicted to reach $612.7

12-20-2018 | Energy & Environment
Brisbane Power Electricians
Brisbane Power Electricians
Brisbane Power is a family owned business of second generation Electricians. From our humble beginnings in 1978, we boast 28 years of experience in electrical services across Brisbane and surrounds. We provide unparalleled 24 hour emergency electrical services to homes and businesses. Brisbane Power is a family owned business of second generation Electricians. From our humble beginnings in 1978, we boast 28 years of experience in electrical services across Brisbane and
12-05-2018 | Fashion, Lifestyle, Trends
Markilux
Privacy through solar power
The vertical “Shadeplus” blind is to be operated via a new solar module Awnings are not only available as individual items, but also come in a double pack. One of these awnings protects against UV radiation and heat, and the other against glaring light. They achieve this with the assistance of solar power as a practical and simultaneously environmentally-friendly energy source The “pergola” by markilux has been available for quite some time
06-04-2018 | Advertising, Media Consulting, …
HTF Market Intelligence Consulting Pvt. Ltd.
Temporary Power Generation/Power Rental Market Analysis by Leading Manufacturers …
A new research study from HTF MI with title Global Temporary Power Generation/Power Rental Market Size, Status and Forecast 2025 provides an in-depth assessment of the Temporary Power Generation/Power Rental including key market trends, upcoming technologies, industry drivers, challenges, regulatory policies, key players company profiles and strategies. The research study provides forecasts for Temporary Power Generation/Power Rental investments till 2022. Access Sample Copy @: https://www.htfmarketreport.com/sample-report/1191683-global-temporary-power-generation-power-rental-market-2 If you are involved in
03-13-2018 | Business, Economy, Finances, B …
Research Trades
Medical Power Market Medical Power Market
This report studies Medical Power in Global market, especially in North America, China, Europe, Southeast Asia, Japan and India, with production, revenue, consumption, import and export in these regions, from 2012 to 2016, and forecast to 2022. Request for discount @ https://www.researchtrades.com/discount/1445183 This report focuses on top manufacturers in global market, with production, price, revenue and market share for each manufacturer, covering Astrodyne TDI (US) CUI Inc. (US) Delta Electronic, Inc (TW) Excelsys
09-13-2017 | Energy & Environment
Orbis Research
Kuwait Power Market to have Surplus Power
Electricity plays a major role in the development of a region, and the electricity generation, transmission and distribution infrastructure serves as a measure of progress in the region. Energy in the form of electricity has become an indispensable part of our everyday lives. Nowadays, power generation uses a variety of sources ranging from fossil fuels like coal and oil, to renewable sources like wind and solar. The energy mix for
08-18-2015 | Industry, Real Estate & Constr …
ESCHA Bauelemente GmbH
Connectivity for power-applications
Halver, 18 June 2015 – At the SPS IPC Drives 2014 in Nuremberg, the connector- and housing specialist ESCHA presented connectivity for power applications. The 4-pole M12x1 connectors are predestinated for power transmission and are available as of now. With the newly developed products identified as ‘Power S‘ or ‘Power T‘, ESCHA offers a consistent- and a qualitatively high-grade M12x1-connectivity portfolio for sensors-, data-, and power supply. The trend moves towards
Comments about openPR
I can't but agree to the positive statements about your portal: easy to use, clear layout, very good search function, and quick editing!
Jens O'Brien, Borgmeier Media Communication