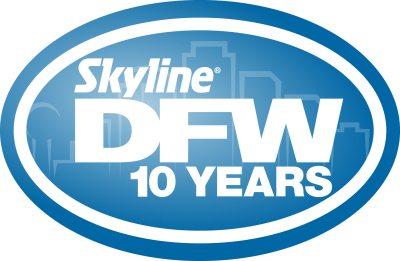 Dallas and Fort Worth area trade show display and event marketing company, Skyline DFW Exhibits & Events, is celebrating a decade in business this month and increasing national recognition in the process. Named to the Inc. Magazine 5000 for a second consecutive year, Skyline DFW is also a recipient of the 2011 Dallas 100™ Entrepreneur Award given to the 100 fastest-growing privately held companies in the Dallas area as determined by the SMU Cox School of Business.

In a decade riddled with industry-wide revenue declines, it’s no wonder that the Dallas trade show exhibit company has been creating a buzz in the exhibiting business for some time. From 2007 to 2010, Skyline DFW achieved revenue growth of 71 percent and nearly doubled the size of their staff and facilities at a time when most in their industry were downsizing.

Skyline DFW’s focus on delivering state-of-the-art exhibiting options with full service support has enabled the company to build a robust and loyal client base. “We are very excited to be on the Inc. Magazine 5000 list for the second year in a row, especially as we celebrate our tenth year anniversary! To experience substantial growth during the tough economic conditions over the last three years is truly a testament to our passionate and dedicated staff,” noted Jeff Meisner, CEO of Skyline DFW Exhibits & Events.

That dedication to service at every level has enabled the Dallas area trade show company to come out on top in the midst of economic uncertainty, generating ample returns for their customers in the process. As businesses across the United States found themselves having to cut back, trade show and event marketing budgets are often one of the first line items to be slashed. Rather than looking at those decreasing budgets as a cause for concern, Skyline DFW saw this as an opportunity to work with their clients on a more strategic level to increase value and return on their marketing investments.

“Some of our clients have experienced layoffs during the recession and rely on Skyline DFW now more than ever to be an extension of their marketing departments. We have responded to this need through unique offerings that include filling out all show paperwork and providing booth staffing. Even customers who are growing continue to leverage our services, so we are very optimistic on the future,” remarked Jeff Meade, Vice President of Skyline DFW Exhibits & Events.

SMU Cox School of Business will hold a ceremony formally recognizing Skyline DFW Exhibits & Events as a recipient of its Dallas 100™ Entrepreneur Award on November 16, 2011 at the Morton Meyerson Symphony Hall.

The Dallas 100TM Entrepreneur Awards Criteria & Methodology
To qualify, candidates must be independent, privately held corporations, proprietorships or partnerships as of May 1, 2010, with at least a three year sales history indicating growth. Candidates must be headquartered in the Dallas Metro area, have sales of more than $500,000, but less than $75 million during the 2007 fiscal year. Award winners are chosen based on increased growth in sales, giving weight to percentage of growth and absolute dollar growth during the previous three years.