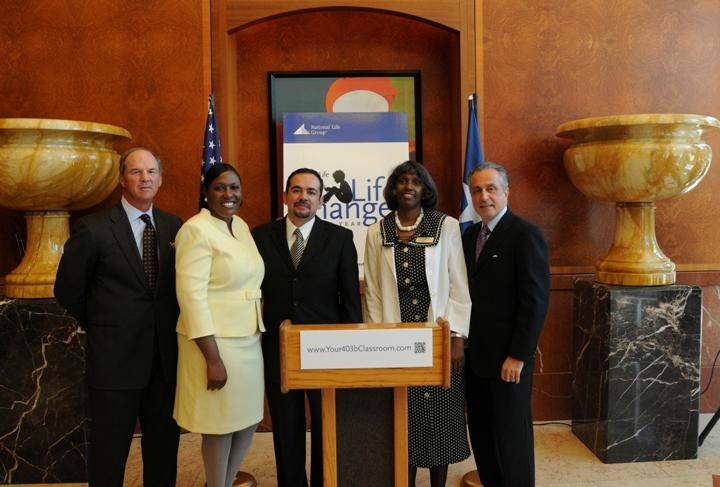 ADDISON, Texas – National Life Group has unveiled a new program to recognize outstanding educators, administrators and school district employees who work in k-12 schools. “The LifeChanger of the Year program is designed to reward school district employees who strive to make a positive difference in the lives of their students,” said Mehran Assadi, CEO of National Life Group. “The LifeChangers of the Year will be recognized for exemplifying excellence, positive influence and leadership.” At a news conference this week in Texas Assadi introduced three Texas educators – two principals and one teacher – who he said represent what the LifeChanger campaign is seeking.One of the three, Israel Cordero, is credited with turning around a low-performing Dallas high school that was in danger of being closed when he took over in 2008.“Israel Cordero simply refused to accept the notion that some students and some schools are destined to fail,” said Assadi.In this inaugural year of the program LifeChangers will be recognized in 22 school districts in Florida, Texas, California and Nevada. More than 350,000 educators are eligible in those 22 districts, which include some of the largest school districts in the country.One winner will be chosen in each district. Students, parents, teachers, administrators can nominate school district employees on a special website, www.your403bclassroom.com. Each winner will receive a cash award and the school will be presented with a classroom award that includes electronic pads, Nook Readers, and classroom supplies.“Today, it is important for communities to support our teachers and school district employees,” said Assadi. “While many state budgets have been cut, educating our children remains a number one priority. Outstanding educators and school employees make a difference. They change lives and help make our society a better place.”Also recognized at the news conference were Wanda Randall, principal of Cockrell Hill Elementary School in Desoto ISD, and Sandra Winkley, a teacher at W.W. Samuell High School in Dallas ISD. “Being a teacher is one of the greatest jobs on earth,” said Ms. Winkley. “Although teachers do not achieve the acclaim of actors or athletes, every actor, every athlete, and yes, every president of the United States must go through a teacher.”National Life Group, through Life Insurance Company of the Southwest, offers 403(b) and 457(b) retirement plans to thousands of policyholders who are educators and school district employees in more than 7,000 school districts nationwide.Chris Graff, vice president of corporate communications at 802.229.3882 or cgraff@nationallife.com National Life Group, One National Life Drive, Montpelier, VT 05604 (800)282-3863 www.nationallifegroup.com