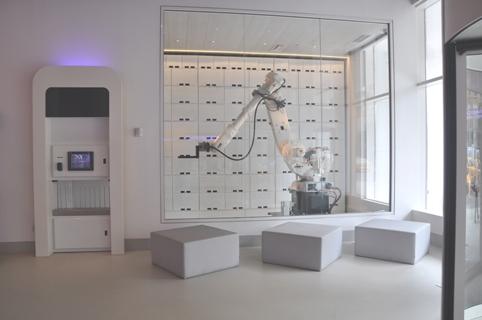 09-12-2014 | Associations & Organizations
ABB Robotics
YuMi® - the future of human-robot collaboration
London/Zurich, September 9, 2014 – ABB has unveiled the world’s first truly collaborative robot: YuMi®. YuMi is a human-friendly dual arm robot designed for a new era of automation, for example in small parts assembly, where people and robots work hand-in-hand on the same tasks. YuMi is short for ‘you and me,’ working together. YuMi has been developed to meet the flexible and agile production needs of the consumer electronics
06-03-2014 | Associations & Organizations
ABB Robotics
New small robot family addresses the needs of modern material handling and machi …
With the introduction of the IRB 1200 ABB addresses the needs of the material handling and machine tending industries for flexibility, ease of use, compactness and short cycle times while still maintaining large working envelopes. “We are excited to introduce the IRB 1200,” says Phil Crowther, Small Robots Product Manager. “Our exhaustive market analysis and development process has resulted in a robot that is incredibly compact, allowing for maximization of useable
02-20-2013 | Associations & Organizations
ABB Robotics
ABB wins order for 2,400 robots from BMW Group
Zurich, Switzerland. ABB, the leading power and automation technology group, is poised to start the New Year with a bang following the order of 2,400 robots by BMW Group. Over the next three years the robots will be installed at factories in Regensburg and Leipzig, Germany, as well as in Tiexi, China. The ABB robots will mainly be used for material handling tasks, as well as gluing and spot welding
04-25-2012 | Associations & Organizations
ABB Robotics
ABB achieves a major milestone in industrial robotics
Yingkou Jinchen specializes in professional high-end intelligent automation in the field of new energy and photovoltaic. The eventual user of the robot, Canadian Solar, is one of the world’s largest solar module producers. They are a leading provider of ingots, wafers, solar cells, solar modules, solar power systems and specialized solar products across the globe. A celebration ceremony was held on March 27, 2012 at Yingkou Jinchen Machinery Co., Ltd and