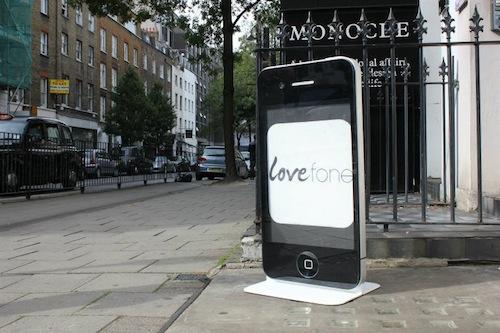 iPhone on display before it was stolen

A £200 reward has been offered after a next generation iPhone was stolen from a pavement in central London. This time, Apple can breathe easy – it was a giant iPhone 4 replica constructed by Marius Istratescu, a leading designer who goes by the name 'Decoartist' (http://decoartist.co.uk). The iPhone was two months in the making (with several failed prototypes before it) as a pavement sign for the iPhone repair company Lovefone (http://lovefone.co.uk) on Charlotte Street in central London – and it took just 6 hours after its debut on Thursday 29 September for it to vanish.Marius, 30, from Romania, said, 'I'm so upset – it was such a labour of love – I even took pieces from my wife's necklace to create the camera lens, and cut off a piece of my bike frame to make the headphone jack. We only put it out for a few hours to get some feedback it, before adding a chain – I guess the feedback was that it was far too good not to steal!' If anyone has any information leading to its safe return, Lovefone are offering £200 worth of iTunes vouchers. Four feet long, the iPhone is immediately recognisable, and so may be being hidden in the thief's home. If you see anyone acting suspiciously with a giant iPhone, please get in touch at info@lovefone.co.uk or on 02070784341.Lovefone is a specialist iPhone, Pad and iPod replacement business. It offers a fast, reliable mail-in service for iPhone users across the UK, plus a convenient drop-in and courier service in London.Charlotte Street info@lovefone.co.uk Lovefone 64 Charlotte Street London W1T 4QD

02-19-2021 | Fashion, Lifestyle, Trends
Dr Rasha Clinic London
Dr Rasha Clinic London: The Most Trusted Aesthetic Clinic In London
Dr Rasha Clinic London (https://www.drrashaclinic.com/) is the most trusted aesthetic clinic London based. Owned by Dr Rasha Rakhshani, one of the most experienced and respected cosmetic doctors in the UK, the clinic offers extensive aesthetic services incorporated with medical knowledge and artistry, which clients keep coming back to. With its impressive client base, not only in the UK, but also from other parts of the world mainly in the US, Europe,
10-21-2019 | Leisure, Entertainment, Miscel …
London Backpackers
London Backpackers for Cheapest Hostel Stay in London - Cut the Cost of a Stay i …
London is a fantastic place to visit at any time of the year, but there’s really no getting away from the fact that a trip can be expensive. The good news for travelers from all over the world is that they can bring those costs down and still enjoy a fantastic visit if they book a stay at the London Backpackers hostel. The hostel is located in the heart of
02-19-2018 | Advertising, Media Consulting, …
FirstRank Digital Marketing
SEO Agency London
FirstRank is a leading digital marketing agency based in London, offers Website Development, Search Engine Optimization and Social media marketing service. we provide seamless growth for your business with our digital marketing services and solutions. Our highly competent teams are constantly adding the smile to the faces of our clients. Digital marketing is an investment and our digital marketing Agency focus on returns. In 2012, we started as a SEO company
01-16-2017 | Industry, Real Estate & Constr …
The Man Van Director
The Man Van in London Makes Moving In London More Affordable
The London removal company has become one of the most recommended home and office removal services. London continues to be the most expensive place to purchase a home in the UK with the average price of a property costing £473,073. However, it’s not just the cost of purchasing or renting a home that can be expensive, moving in and around London can be more expensive than other areas of the UK.
05-21-2012 | Health & Medicine
Otto Bock HealthCare GmbH
London 2012
Off to the Paralympics with 15,000 spare parts Ottobock, the medical equipment company, is preparing for a large-scale operation at the Paralympic Games in London (29 Aug. to 9 Sept. 2012). Some 4,200 athletes are expected at the second largest sports event in the world. In order to ensure technical service for them, Ottobock is sending 78 orthopaedic technicians from 20 countries. The first vehicles are already transporting 9
09-21-2011 | Business, Economy, Finances, B …
Building Company London
Building Company London Provides Space and Value with Loft Conversions London
For Immediate Release London, UK (mynewsdesk), September 5, 2011 – Building Company London is offering a total loft conversions London package, including the services of architects, designers and planning professionals. Customers taking advantage of the service get their own home “turnkey” project, where the company takes care of everything from initial consultation and design through to the final roll of the painter and decorator’s brush. The Building Company London offers this level
Comments about openPR
OpenPR is clearly structured and remains true to its principle of confining itself to the essential parts. OpenPR has proven to be a very good and reliable partner to our media agency: Within the shortest time the releases are online and go down well with the media representatives. The success of OpenPR is reflected in the steadily increasing number of press releases. It is good that OpenPR exists!
Ursula Koslik, Director Marketing & PR, F+W Hamburg