How does hydrogen power pose a threat to the overhead catenary system in the coming years? 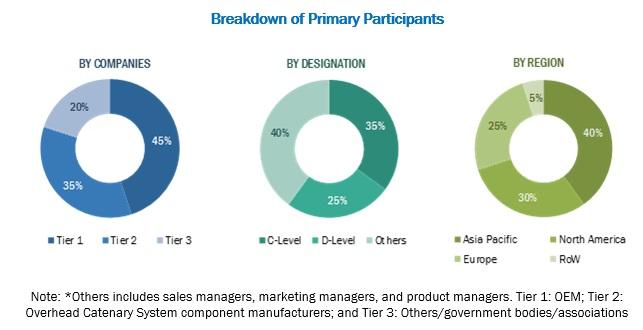 The Overhead Catenary System Market was valued at USD 21.85 billion in 2017 and is projected to reach USD 46.94 billion by 2025, at a CAGR of 9.09% during the forecast period. The overhead catenary system market for electrified track length in operation is projected to grow at a CAGR of 6.55% during the forecast period, from an estimated market size of 232.6 thousand miles in 2018 to 326.7 thousand miles by 2025. The overhead catenary system acts as the contact line technique for the transmission of electrical power to the trains. It is also called overhead lines equipment, overhead contact system, and overhead wiring in the rail industry. Thus, the combination of pantograph and catenary system is responsible for transferring electrical power to the train for its operation at varying speeds. The major characteristics of the system are its reliability and safety for the transmission of power supply. The overhead catenary system market is expanding with the development of the rail industry worldwide. In this study, 2017 has been considered the base year, and 2018 to 2025, the forecast period for estimating the market size of the overhead catenary system market.Download PDF Brochure @ https://www.marketsandmarkets.com/pdfdownloadNew.asp?id=264109804Expansion of high-speed rail network and adoption of electric rapid rail transit would drive the global overhead catenary system demand to approximately USD 46.94 billion by 2025Several countries of Europe, Asia Pacific, and the Middle East have introduced high-speed rail projects to encourage mass rapid transit. The rail authorities of countries have developed high-speed train projects just after its introduction in the rail industry. The development of rail infrastructure indirectly fosters the growth of the overhead catenary system market. The acceptance of high-speed trains is anticipated to rise in the near future due to the prospects of economic growth created by the development of high-speed rails. As the high-speed rail is operated purely with electric propulsion, the overhead catenary system market is anticipated to grow in the coming years.Many emerging countries as well as developed countries are focusing on expanding their rail network for a better standard of living and economic growth. Moreover, urban rail transit such as metro and trams have emerged as reliable modes of city transport. Many urban rail projects are currently in the pipeline and are due for completion in the coming years. Several major rail companies are working on the enhancement of the power transmission technology across the globe. The respective rail authorities of the countries have implemented the use of the overhead catenary systems for the operation of the metro rail transit.Request Free Sample Report @ https://www.marketsandmarkets.com/requestsampleNew.asp?id=264109804Critical questions the report answers:o Where will the urban rail transit developments take the overhead catenary system industry in the mid to long term? o How does hydrogen power pose a threat to the overhead catenary system in the coming years?View Detail TOC @ https://www.marketsandmarkets.com/Market-Reports/overhead-catenary-system-market-264109804.htmlMarketsandMarkets(TM) INC. 630 Dundee Road Suite 430 Northbrook, IL 60062 USA : +1-888-600-6441UK : +44-800-368-9399 sales@marketsandmarkets.comMarketsandMarkets(TM) provides quantified B2B research on 30,000 high growth emerging opportunities/threats which will impact 70% to 80% of worldwide companies' revenues. Currently servicing 7500 customers worldwide including 80% of global Fortune 1000 companies as clients. Almost 75,000 top officers across eight industries worldwide approach MarketsandMarkets(TM) for their painpoints around revenues decisions.

You can edit or delete your press release How does hydrogen power pose a threat to the overhead catenary system in the coming years? here

01-07-2021 | IT, New Media & Software
MarketsandMarkets(TM) INC.
Smart Water Management Market revenues worth $21.4 billion by 2024
According to a new market research report "Smart Water Management Market by Water Meters (AMR & AMI), Solutions (EAM, Network Management, SCADA, Advanced Pressure Management, MDM, Smart Irrigation), Services, End User (Commercial & Industrial, Residential), and Region - Global Forecast to 2024" published by MarketsandMarkets™, the smart water management market size expected to grow from USD 11.7 billion in 2019 to USD 21.4 billion by 2024, at a Compound Annual
05-29-2020 | IT, New Media & Software
MarketsandMarkets(TM) INC.
Virtual Data Room Market Expected to Grow $2.7 billion by 2025
According to research report "Virtual Data Room Market by Business Function (Marketing and Sales, Legal, Finance, and Workforce Management), Component (Software and Services), Deployment Mode, Organization Size, Industry Vertical, and Region - Global Forecast to 2025", size is projected to grow from USD 1.4 billion in 2020 to USD 2.7 billion by 2025, at a Compound Annual Growth Rate (CAGR) of 14.4% during the forecast period. The major factors driving
05-26-2020 | Advertising, Media Consulting, …
MarketsandMarkets(TM) INC.
Global Machine Tools Market by Machine Type, Automation Type, Industry and Regio …
Post COVID-19, the Global Machine Tool Market size is projected to reach USD 68.9 billion by 2021 from an estimated USD 65.6 billion in 2020, at a CAGR of 5.0%. The projections were based on the ongoing automotive industry production drop, which is the biggest consumer of machine tools and, additionally, the supply chain disruptions caused by the COVID-19 pandemic in the manufacturing industry. The machine tool market is expected to
05-22-2020 | Advertising, Media Consulting, …
MarketsandMarkets(TM) INC.
Low-Speed Vehicle Market - Growth, Trends, and Forecast (2020 - 2025)
The global low-speed vehicle market is projected to grow at a CAGR of 8.6% to reach a market size of USD 6.3 billion by 2025 from 4.2 billion in 2020The rising trend of using LSVs in gated communities, hotels, and resorts, industrial facilities, golf courses & college campuses and changing face of the transportation industry to drive the low-speed vehicles market is projected to fuel the demand of these vehicles. Download

07-28-2020 | Tourism, Cars, Traffic
Khoja Consultants
$100,000,000 USD job contract for travel - $3,000,000 USD referral commission.
Khoja Consultants invites companies, teams or venture capitalists for a $100,000,000 USD contract for travel. The selected company will be providing all accommodations and expenses for a 6-month long business trip around the world. Khoja Consultants expects five-star treatment including close security with private planes, hotels, secured vehicles and helicopters if necessary. More details on the job contract and application are provided at - www.KhojaConsultants.com. There is a $3,000,000
06-19-2017 | Business, Economy, Finances, B …
MarketsandMarkets
Polyurethane Dispersions Market worth USD 2.04 Billion USD by 2020
The report " Polyurethane Dispersions Market by Type (Water-Based Polyurethane Dispersions and Solvent-Based Polyurethane Dispersions), by Application (Coatings, Adhesives & Sealants, Synthetic Leather Production, Fiber Glass Sizing, and Others) - Trends & Forecasts to 2020", The global polyurethane dispersions market is projected to reach USD 2.04 Billion by 2020 at a CAGR of 6.8% between 2015 and 2020. This growth is fueled by the high potential from the textile and
04-13-2017 | IT, New Media & Software
MarketsandMarkets.com
Retail Analytics Market worth USD 5.1 Billion USD by 2020
According to a new market research report "Retail Analytics Market by Business Function (Marketing and Customer Analytics, Merchandizing and In-Store Analytics, Supply Chain Analytics, Strategy and Planning), by Type, by Solutions and by Services - Global Forecast and Analysis to 2020", defines and segments the global retail analytics market on the basis of business function, solutions, services, deployment types, and regions along with providing an in-depth analysis and market size
11-01-2016 | Health & Medicine
iHealthcareAnalyst, Inc.
Metabolomics Market USD 1.24 Billion by 2020
The global metabolomics market is estimated to reach USD 1.24 Billion in 2020, growing at a CAGR of 15.6% from 2016 to 2020, according to a market research report Metabolomics Market 2013-2020, published by iHealthcareAnalyst, Inc. Visit the Metabolomics Market 2013-2020 report at https://www.ihealthcareanalyst.com/report/metabolomics-market/ Metabolomics is the scientific study of chemical processes involving metabolites, whereas metabolome represents the collection of all metabolites in a biological cell, tissue, organ or organism, which
10-31-2016 | Health & Medicine
iHealthcareAnalyst, Inc.
Radiopharmaceuticals Market USD 350 Million by 2020
Radiopharmaceuticals Market 2013-2020 report estimates the global radiopharmaceuticals market to reach nearly USD 350 Million in 2020, at a CAGR of 4.9% from 2016 to 2020 - iHealthcareAnalyst, Inc. Visit the Radiopharmaceuticals Market 2013-2020 report https://www.ihealthcareanalyst.com/report/radiopharmaceuticals-market/ Medicinal radiocompounds or radiopharmaceuticals are a group of pharmaceutical drugs which have radioactivity and they can be used as diagnostic and therapeutic agents. Radiopharmaceuticals are used in the field of nuclear medicine as radioactive tracers
10-19-2016 | Health & Medicine
iHealthcareAnalyst, Inc.
Orthobiologics Market USD 5.8 Billion by 2020
Orthobiologics Market 2013-2020 report estimates the global orthobiologics market to reach nearly USD 5.8 Billion in 2020, at a CAGR of 6.2% from 2016 to 2020 - iHealthcareAnalyst, Inc. Visit the Orthobiologics Market 2013-2020 report https://www.ihealthcareanalyst.com/report/orthobiologics-market/ The global orthobiologics market report provides market size (Revenue USD Million 2013 to 2020), market share and forecasts growth trends (CAGR%, 2016 to 2020). The global orthobiologics market segmentation is based on product types (allograft, bone
Comments about openPR
OpenPR is clearly structured and remains true to its principle of confining itself to the essential parts. OpenPR has proven to be a very good and reliable partner to our media agency: Within the shortest time the releases are online and go down well with the media representatives. The success of OpenPR is reflected in the steadily increasing number of press releases. It is good that OpenPR exists!
Ursula Koslik, Director Marketing & PR, F+W Hamburg