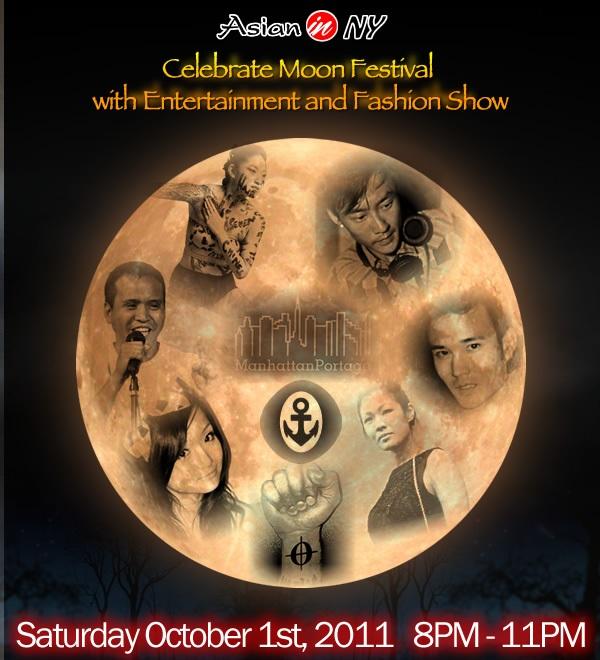 AsianInNY, New York’s premier online destination for multicultural networking and entertainment, is hosting a grand Moon Festival Celebration on Saturday, October 1st, 2011 from 8pm to 11pm at the Bennett Media Studio (723 Washington Street, NY). There will be an exciting line-up of quality entertainment, from comedy to dance, music, art and fashion. AsianInNY is honored to partner with Manhattan Portage, an internationally known brand with quality bags made in Taiwan, and Onassis Clothing, a global lifestyle menswear brand with impeccable Japanese aesthetics, to showcase their designs on a runway fashion show. There will also be a fashion show featuring pieces from the CODY SAI Collection, a featured designer on NHK World TV (BBC of Japan) as one of the next emerging Asian designers coming out of New York City. Of course, not to be missed are the Asian models that will be walking the runway. Stand-up comedian Air Tabigue will be the MC for the night’s festivities. Tabigue has appeared on NBC, FOX and has hosted of Asian America on PBS covering talented Asian-American artists in entertainment. He will have the audience laughing all throughout the night with his witty commentary and fun persona. To set the party mood is DJ J4. With 4 rap albums released in Taiwan, J4 has made a name for himself by playing an ever-growing role in the field of Taiwan Hip Hop. J4 has provided pulsating beats in numerous popular clubs throughout Taiwan and he will no doubt enlighten guests with his music. Guests can expect a spectacular performance by pianist Vivian Fang Liu, who has performed in many venues including Lincoln Center, Carnegie Hall, Steinway Hall and Hilton Grand Theatre, just to name a few. Vocalist Baiyu who has been featured in Celebuzz, MTVIggy and SoulTrain.com will perform her 2011 single “Together”, which just premiered on MTV Networks via their marquee programming. Also in the line-up of events is a dance performance by J Chen Project, a New York-based dance company founded in 2008 under the direction of Jessica Chen. Chen recently choreographed a production representing the USA Pavilion at the Shanghai World Expo and her show “To Identify” will have an upcoming limited-engagement at Dixon Place. Additionally, guests can look forward to a live performance by Coda Resistance, a band blending the best parts of Indie-Punk & Modern Rock with socially conscious lyrics. YiLin Hsu’s original artwork will be on display in the studio. YiLin’s life as a former model took her from Hong Kong and Singapore, and then to New York City. Now, using her fashion background, YiLin creates art that consists of all elements of creative and playful, while being unique. Sponsors of AsianInNY’s Moon Festival celebration include Asahi Beer, Bennett Media Studio, Cohesion Freight, Greater Chinatown Community Association, Haruo Noro Salon, Jade Chiu Design, Kallisti Jewelry, KeoK'jay, Macys, Manhattan Portage, McDonald's, Onassis Clothing, Palais Prive Wines, Popchips, Taiwan Beer, and 247Feature.com. The first 200 people who purchase tickets online will receive complimentary, exclusive gifts upon arrival. For more information, please visit http://www.asianinny.com/?p=13928. About AsianInNY: Launched at 8:08 PM on 8/8/08, AsianInNY was established to facilitate business and social connections and provide a platform for social media networking. The site is targeted to anyone who loves and wants to understand more about Asian culture, even if they, themselves, are not Asian. AsianInNY is active in the community through charitable endeavors and cultural events. For more information, please visit www.AsianInNY.com. AsianInNY 350 5th Ave, NY 10118 212-516-1688

01-18-2019 | Tourism, Cars, Traffic
Spire Research and Consulting
Asian airports are world beaters
According to a customer survey by Skytrax, four out of the five best airports in the world are in Asia. These five includes Singapore’s Changi Airport, Incheon International Airport (Korea), Tokyo International Airport (Haneda) and Hong Kong International Airport. These airports are destinations in themselves as they offer a complete experience in terms of services, entertainment, retail and comfort. Asian authorities are realizing that the airport is the thing that makes the
07-05-2018 | Health & Medicine
Coherent Market Insights
Asian Breast Implants Market - Insights
Breast implants are artificial surgery prosthesis made of either silicone gel, silica or saline solutions, which involves reconstruction of breasts to improve the effects of mastectomy or other damages to breasts. This breast implantation procedure is also called as breast augmentation. Breast implant and its reconstruction requires tissue expanders that helps in the expansion of breast muscles and skin. A permanent breast implant is inserted post removal of the tissue
11-01-2011 | Business, Economy, Finances, B …
Clariant International Ltd
Clariant strengthens Asian presence
 New Singapore Headquarters for South East Asia & Pacific  New Textile Chemicals Headquarters and application lab  First Asian Clariant ethoxylation plant in Dayabay, China Muttenz/Singapore, November 1, 2011 - The Swiss-based specialty chemicals company Clariant announces the opening of its new Regional Headquarters for South East Asia & Pacific and its new Global Textile Chemicals headquarters, both located in Singapore. Today Clariant is also celebrating the inauguration of its newly built ethoxylation plant
09-25-2008 | Media & Telecommunications
iCallGlobe Ltd.
Special Asian VoIP Calling Rates at YouTring.com
YouTring.com has recently announced the release of a new tariff plan for calling to India and other Asian countries. An offering of leading VoIP telephony service providers iCallGlobe, the website is an amalgamation of a wide array of features combining social networking and IP telephony. Launched in May this year, the website has been receiving a good response from the global audience primarily due to its varied functionalities. iCallGlobe, in
09-05-2008 | Business, Economy, Finances, B …
The Knowledge Centre
Asian Insurance Focus: Vietnam & Thailand
Asian Insurance Focus: Vietnam & Thailand New Delhi, 4th September 2008: Globalization is the key source which is bringing about an "irreversible transformation" in the Asian insurance market. Asia is becoming an important growth engine for global insurers due to the changing socio-economic dynamics. According to a latest research report from HSBC, in order to be long-term winners, life insurance companies in Asia need to diversify their income streams such that
08-29-2008 | Business, Economy, Finances, B …
The Knowledge Centre
Asian Insurance Focus: India & China
New Delhi, 29th August 2008: Globalization is the key source which is bringing about an "irreversible transformation" in the Asian insurance market. India and China are "dynamically" driving the growth of insurance markets in Asia. This process has been expedited by the "soothing impact" of the Asian financial crisis on reform resistance and its contribution towards acceleration of change, including deregulation, particularly "on the back of gradual opening up of
Comments about openPR
9 o'clock: discuss press release with client, 10 o'clock: submit release to openPR, within the briefest possible time release is published and displayed in a prominent place on openPR.de. I am thrilled!
Zehra Spindler, Calypso Now! - Communication Agency