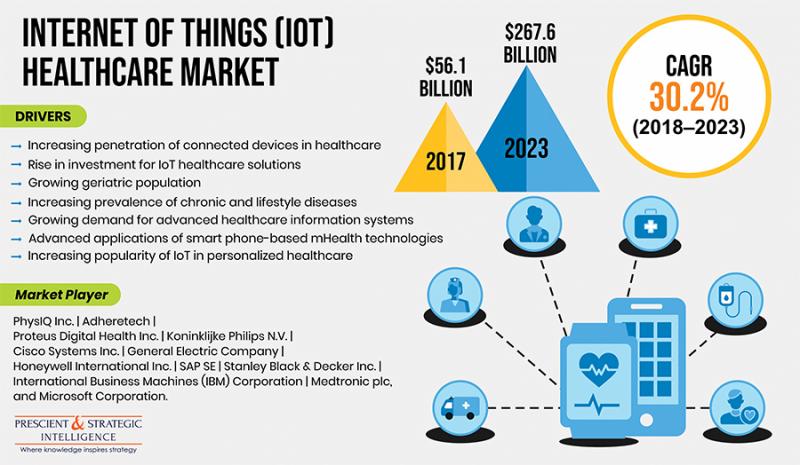 The healthcare spending is set to experience a growth of 5.4% between 2018 and 2022, compared to the 2013-2017 growth rate of 2.9%, according to the 2019 Global Health Care Outlook report published by Deloitte. Not only are the number of hospitals, cases of chronic diseases, and geriatric population increasing, but the sector is also going through rapid technological advancements. One of the recently introduced technologies, which is also becoming rapidly popular, is internet of things (IoT). Before delving into its application in healthcare, it is important to first understand its basic concept. IoT involves equipping various electronic devices with some sort of communication technology so that the data exchange among these happens automatically without the requirement for humans. In the medical field, these could range from a simple electronic prescription log to complicated equipment such as ventilators, cardiac monitors, and implantable pacemakers.Download sample copy of this report at: http://bit.ly/2SCoGzOAs per a study by P&S Intelligence, the IoT healthcare market valued $56.1 billion in 2017, from where it is predicted to ultimately reach $267.6 billion in the coming years at a CAGR of 30.2%. The technology finds many applications in the medical and wellness sector, including clinical operations and workflow management, telemedicine, connected imaging, medication management, and inpatient monitoring. Among these, the heaviest utilization of IoT up till now has been in telemedicine, and the trend is set to continue in the near future. It allows patients and doctors to see and communicate from a distance via audio-visual equipment. Not only can they talk to each other, but the patient data can be also automatically transferred from medical devices straight to the healthcare provider.This is of special benefit to patients who live in remote areas, far from a healthcare facility such as a clinic, nursing home, or a full-fledged hospital. IoT-enabled telemedicine saves time by enabling quick data exchange and money by doing away with frequent hospital visits. The elderly or those who are confined to a bed and are unable to travel are also prominent users of telemedicine. Defibrillators, insulin pumps, cardiac monitoring devices, continuous positive airway pressure machines, and oxygen tanks are the most prominent remote patient care devices to be equipped with IoT. As these provide swift medical care and improve patient outcomes, the demand for these devices is rising across the world.Inquiry before purchase of this report: http://bit.ly/2wjwIXbIt is because of such initiatives that North America and Europe have been the two largest IoT healthcare markets up till now. Additionally, the prevalence of chronic diseases in quite high in the U.S., with the Centers for Disease Control and Prevention reporting that six in every 10 Americans have at least once chronic condition, while 4 in 10 have two or more. As such diseases require long-term monitoring and care, their increasing incidence would raise the demand for IoT-enabled healthcare services and devices. However, in future, Asia-Pacific is expected to witnesses a surging demand for such technologies owing to the growing geriatric population, increasing medical expenditure, and requirement for better patient care.Contact: P&S Intelligence International: +1-347-960-6455 Email: enquiry@psmarketresearch.com Web: https://www.psmarketresearch.com Blog: https://psintelligence.blogspot.com/About P&S IntelligenceP&S Intelligence is a provider of market research and consulting services catering to the market information needs of burgeoning industries across the world. Providing the plinth of market intelligence, P&S as an enterprising research and consulting company, believes in providing thorough landscape analyses on the ever-changing market scenario, to empower companies to make informed decisions and base their business strategies with astuteness.

02-21-2020 | Advertising, Media Consulting, …
P&S Intelligence
Automated External Defibrillator (AED) Market Analysis, Top Companies, New Techn …
The key driver behind the advancement of the market is the rising occurrence of cardiac diseases, especially among the geriatric population. AED is a lightweight, portable device, which is used to deliver a shock to the heart, to stop an irregular heart beat (arrhythmia) and bring back the sinus rhythm, after a sudden cardiac arrest (SCA). Request to Get the Sample Pages at: https://www.psmarketresearch.com/market-analysis/automated-external-defibrillator-market/report-sample A significant trend being observed around
02-21-2020 | Business, Economy, Finances, B …
P&S Intelligence
Increasing Adoption of Business Impact Analysis Driving Business Continuity Mana …
The operational risks in organizations, such as model risk, cybersecurity risk, conduct risk, and vendor risk, are on a rise owing to the stiff regulatory compliances and fines and increasing economic uncertainties. In order to deal with these, the enterprises are demanding real-time risk assessment, robust risk mitigation, and greater risk accountability from business and management lines. In addition to this, as the financial services are expanding their businesses, the
02-21-2020 | Business, Economy, Finances, B …
P&S Intelligence
How is Rising Focus on Customer Satisfaction aiding in Speech Analytics Market G …
In today's competitive world, companies are finding it difficult to engage customers for the long-term. Due to the many choices available to customers, it is being observed that they are no more brand loyal. Despite being provided with a better price and product quality, customers prefer buying products from competitors, if they face any service-related problems. Therefore, customer satisfaction, in terms of product-quality, pricing, and customer services, has become a
02-21-2020 | Business, Economy, Finances, B …
P&S Intelligence
Rising adoption of AI-enabled wearables for healthcare applications driving wear …
Around the world, the sale of smartwatches is rising, on account of the increasing disposable income and awareness about the latest gadgets available. Such consumer products function similar to smartphones, with features such as FM radio, Bluetooth or Wi-Fi connectivity, mobile apps, digital display, and an operating system. Some even have thermometers, digital cameras, pedometers, accelerometers, altimeters, heart rate monitors, compasses, barometers, speakers, GPS receivers, and microSD cards. With time,

02-12-2019 | IT, New Media & Software
MAXIMIZE MARKET RESEARCH PVT. LTD.
Global IoT Gateway Market
Global IoT Gateway Market – Industry Analysis and Forecast (2018-2026) – by Node, Connectivity Technology, Component, Application, and Region. Global IoT Gateway Market was valued US$ 11.5 Bn in 2017 and is expected to reach US$ 85 Bn by 2026, at a CAGR of 28.41 % during the forecast period. The objective of the report is to present a comprehensive assessment of the market and contains thoughtful insights, facts, historical data, industry-validated
12-27-2018 | Advertising, Media Consulting, …
Maximize Market Research
Global IoT Software Market
Global IoT Software Market is segmented into type, application, and geography. On the basis of type, a market is segmented into Real-time Streaming, Analytics Software, Security Solution Software, Data Management Software, Remote Monitoring System Software, and Network Bandwidth Management Software Global IoT Software Market was valued US$ 1.5 Bn in 2017 and expected to reach US$ 7.9 Bn in 2016, at CAGR 23.8% during forecast period. Browse Complete Premium Research
12-21-2018 | Business, Economy, Finances, B …
Maximize Market Research
Global IOT Sensors Market
Global IOT Sensors Market – Industry Analysis and Forecast (2016-2024) Global IOT Sensors Market was valued at more than US$ 4 Bn in 2016 and is expected to cross US$ 45 Bn by 2024, at CAGR of more than 40%. The increase in IoT sensors market growth is driven by the certain key factors such as development of cheaper, smarter, and advanced sensors, rising market demand for smart devices and
12-21-2018 | Advertising, Media Consulting, …
Transparecny Market Research
IoT Data Management Market
The demand for IoT data management has increased due to widespread adoption of end-to-end data management platforms to capitalize IoT data more efficiently. Moreover, modernization of data warehouse architecture, rising need for data security and data traffic management, and rising implementation of IoT device security for data encryption are some of the other factors driving demand in this market. The global IoT data management market can be categorized based on type
04-09-2018 | Business, Economy, Finances, B …
ReportsWeb
Telecom IoT
Publisher’s market research analysts predict the global telecom IoT market to grow steadily during the forecast period and post an impressive CAGR of more than 42% by 2020. This industry research report identifies the growing adoption of intelligent transportation systems (ITS) to be one of the major factors that will have a positive impact on the growth of this market in the coming years. In addition to enabling operators to
03-22-2017 | Business, Economy, Finances, B …
Future Market Insights
IoT Processor Market
In this connected world, internet of things (IoT) is fueling every aspect of human lives. The data that is generated every day from these connected devices is humongous. Proper functioning of these connected devices requires real time exchange of data and information amongst them so that they can solve human problems. In another word IoT means more data, more sensors, agile responses, end-to-end connectivity and smarter user interfaces. All these
Comments about openPR
Your portal is fast, simple, and easy to use. Others may have more functions but they also demand more editing time, you have to preformat the text in order to achieve a good result etc. I think openPR is really fantastic!
Andreas Knepper, wallmedien AG