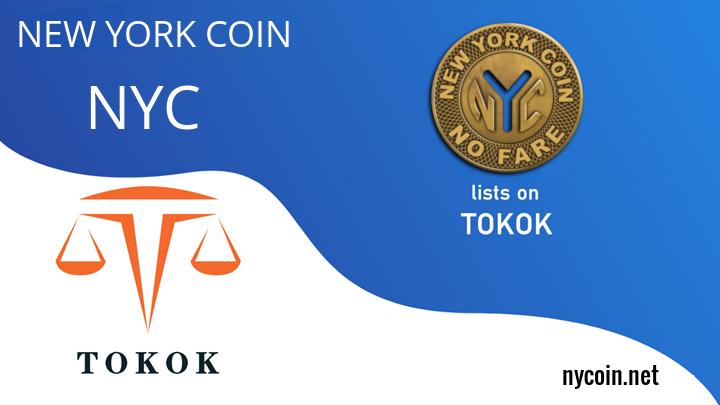 New York Coin (NYC) is excited to announce inclusion on one of the largest Chinese cryptocurrency exchanges, TOKOK (https://www.tokok.com/index) , which is currently ranked in the Top 30 at Coinmarketcap (https://coinmarketcap.com/exchanges/tokok/ ) Beginning February 17th, New York Coin will be available for purchase and trading at TOKOK crypto exchange. TOKOK has over 1 million registered users and a very robust daily trading volume exceeding $1 Billion USD. Inclusion on TOKOK will instantly add substantial liquidity to New York Coin as well as introduce NYC to the rapidly growing Chinese cryptocurrency market. New York Coin is simply a faster, free version of Litecoin with more energy-efficient, low difficulty mining. New York Coin is completely open source code which has been published at Github code repository since launching on March 6, 2014. New York Coin is a fair launch, no pre-mine, original blockchain cryptocurrency that was launched by an unknown developer whom to this date has never communicated with anyone and completely disappeared after launching this amazing retail-level cryptocurrency. New York Coin is the only other cryptocurrency in existence besides Bitcoin that was launched by an unknown developer. In early 2014, New York was aggressively targeting Bitcoin related start-ups and prosecuting Charlie Shrem due to the illegal operations of his company, BitInstant. New York Coin was launched approximately 6 months before the death of Hal Finney, recipient of the very first Bitcoin ever sent. Hal Finney is rumored to be the mysterious Satoshi Nakamoto, or a member of the group of individuals that launched Bitcoin in 2009. And he may also be the anonymous developer that decided to launch New York Coin in the face of their aggressive actions toward the Bitcoin community. New York Coin is a much faster and completely free version of Litecoin, both of which use the scrypt algorithm instead of Bitcoin's SHA-256. Scrypt is a much more efficient protocol that allows basic computer equipment to verify and confirm transactions on the network. Due to the original developer of New York Coin disappearing at launch in 2014, development on the project was slow for the first few years. Loyal miners and a decentralized assortment of cryptocurrency enthusiasts that saw New York Coin's future potential for worldwide retail-level use kept the network alive and healthy. In January 2018, during Bitcoin's last supercycle, a group of developers found New York Coin and have since updated the code, cleaned up aging wallets and implemented more modern security features to protect the network and ensure its continued longevity. New York Coin has stood the test of time and is actually older than Ethereum. Many other cryptocurrencies have come and gone. Charlie Kartchner, Crypto Writer 167 Mott St New York, NY 10013 718-490-7554 nycoinfoundation@gmail.com https://newyorkcoin.net New York Coin has survived in the murky swamp of next-generation digital currency and the future appears very bright. New York Coin not only enables no cost merchant services to retailers around the globe but also a completely free worldwide money transfer system. New York Coin definitely deserves a closer look.