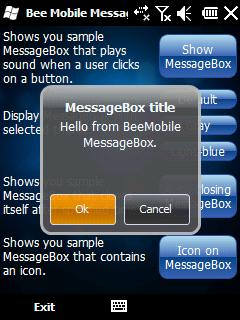 September 23rd, 2011, Bratislava, Slovak Republic – Bee Mobile, producer of Graphical User Interface componentsa and controls for mobile computers has released a new version of their .NET Compact Framework control – MessageBox. This very common control in developer community is now multi-media friendly and contains new powerful features such as displaying icons, playing sound, iPhone-like look or auto-close functionality. "It is mostly Windows CE developers who find the auto-close functionality very useful in their applications.", said Gabriel Minarik, product manager at Bee Mobile. "We now provide this functionality to the developer community to make their applications even more user-friendly."The auto-close functionality automatically closes the MessageBox after a specified timeout if the user does not press any of the buttons. MessageBox behaves as if the default button was pressed after the timeout.The term multimedia-friendly means that the developers can also assign an icon to MessageBox which is displayed over it. The icon can also be a semi-transparent PNG file - MessageBox will not ignore the alpha channel transparency information as majority .NET Compact Framework controls do. You can even assign a WAV file to MessageBox which will be played whenever a button on the MessageBox is pressed. This influences the user's feeling of interaction even more.Bee Mobile was founded in 2008 with the following vision:To help other developers with software development for mobile devices by putting knowledge and experience into the software components. The result is a range of effective software components targeting .NET Compact Framework and Silverlight platforms with attractive look which implement progressive ideas.Bee Mobile G&M Dynamics, s.r.o. Koceľova 17, 821 08 Bratislava Slovak RepublicContact name: Vladimír Gregor