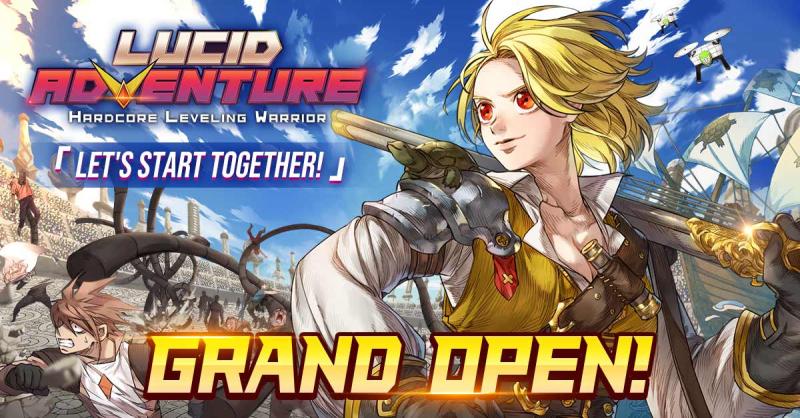 New mobile game, 'Lucid Adventure', will be officially released on Apple App Store and Google Play Store today. App itself is free to play and is available to download from both stores. 'Lucid Adventure' services worldwide and supports 4 languages including English, Japanese and Chinese (traditional and simplified).'Lucid Adventure' is a 2D action RPG that anyone can easily play and also can experience its great adventure with attractive heroes. Major game system is to strategically form up a party with 4 characters, then battle against incoming monster waves and complete the story quests. Not only the stories but there are various amount of other contents that players can enjoy, such as Nightmare Invasion, PvP Arena, Dungeons, Relics and etc.[ Major Attractive Contents ] You can play 'Lucid Adventure' at anywhere through mobile devices. Experience thrilling battle and have endless joy of getting stronger!1. Incredible Adventure and Universe! One day, 'Hardcore Leveling Warrior', the former #1 Ranker of Lucid Adventure, gets his level and stats reset by mysterious ambush. Make party of your own with 4 heroes, help 'Hardcore Leveling Warrior' and redeem his honor. Find out the conspiracy of Nightmares and save 'Lucid Adventure'. This world is depending on you.2. Become a World #1 Ranker, PvP Arena! Challenge other players in the world! You need to setup 2 groups strategically for attack and defend purpose in arena.. The strategy you form up the party directly affects your ranking. Whoever grabs the first place of the season will be listed on 'the Hall of Fame' globally. Become a legend and make your name to be remembered forever.3. Here Comes the Supporters! Set heroes that are not in the main party as the supporters! Maximum 6 supporters are allowed to be set as the supporters and they supply additional status points to the main party. Supporters cause great influences during the battle so don't forget to level them up!4. For those of who are tired of playing alone! If you are looking for someone to play with until the end of the game, Guild is the perfect system for you. Collect APs(Resources in Lucid Adventure) through 'Campfire System' with guild members. Enjoy chatting and sharing the adventure experiences with them.5. Nya Ni Nya! Here's Our Tribute! 'Hohoians' will present tribute to you. They will work for you 24 hours even if you are not playing the game. Tribute includes golds, enchant scrolls and relic pieces. Relic pieces are used to upgrade Relics and it is especially useful to the players. So don't forget to be thankful and collect whenever it is ready!Currently there is an event which gives load of special presents to new users for limited time, including 'A+ Grade Tank Hero - Sora', 'II Tier Uncommon Amulet', '10 Sweep Tickets', '1,000 Diamonds', '30k Golds', '3 Superior Enchant Scrolls' and 'I Tier Material Box'. If you want to start with advantages then don't miss out this chance to receive these items.SuperPlanet Postal Address: Gangnam-gu, Seoul, Republic of Korea Contact information/Press contact: pr@superplanet.netWe are 'SuperPlanet' the mobile game company that develops and publishes the best games of the world!

You can edit or delete your press release 'Lucid Adventure' Goes Live on iOS & Android! here

01-24-2018 | Tourism, Cars, Traffic
ReportsWeb
Global Adventure Tourism: Insight into key adventure tourism trends and the dema …
ReportsWeb.com published “Adventure Tourism Market” from its database. The report covers the market landscape and its growth prospects over the coming years. The report also includes a discussion of the key vendors operating in this market. Publisher's "Global Adventure Tourism", report provides insight into key adventure tourism trends and the demands of adventure tourists. It offers profile and demographic preferences of adventure tourists. The report shades light into future prospects and
04-06-2017 | Advertising, Media Consulting, …
Future Market Insights
Bicycle Tourism: Exciting Adventure on Two Wheels
Bicycle tourism typically means independent cycle trips which are done for adventure and pleasure. Bicycle tourism entirely finishes the need of sports or exercise as cycling itself is a great source of exercise. Bicycle tourism can be either single or multi-day trips. In some cases bicycle tourism can extend to even months depending on the distance covered. Bicycle tours are generally planned either by participants themselves or organised by cycling
08-05-2011 | Tourism, Cars, Traffic
Hannover Adventure Zoo
Hannover Adventure Zoo is millionaire
Eight days earlier than in record-breaking year 2010, Hannover Adventure Zoo was pleased to welcome its millionth visitor on August 3, 2011. The guest of honor, Katja Seeliger from Rellingen close to Hamburg, entered the zoo at exactly 9.44 am and received a special welcome gift: a voucher for an annual ticket as well as a private audience with coaty Diego for all the family. For the 9th year
02-10-2011 | Leisure, Entertainment, Miscel …
Madison PR
Della Adventure India's Largest Adventure Park
Della Adventure is India's Largest Adventure Park, Resort and World Class Corporate Training Destination. Located at Kunegaon, Lonavala away from the rough and tumble of city life, comes a place that redefines “a weekend getaway”. India’s largest outdoor recreation destination – DELLA ADVENTURE. Della Adventure, India's Largest Recreation - Land of Happiness is the brainchild of Jimmy Mistry – Founder, Della Adventure. It is a place that gives a new
11-18-2010 | Tourism, Cars, Traffic
Exotissimo Travel
EXOTISSIMO LAUNCHES ‘FAMILY SOFT ADVENTURE HOLIDAY’PACKAGE
Premier destination management company of South East Asia – Exotissimo Travel - today launched a new product under adventure travel. This holiday package includes 7 days, 6 nights in Cambodia highlights the gateway to the Angkor temples, Siem Reap and temple exploration. It is also complimented with bike rides, treasure hunts in the depths jungle covered temples and gives travelers genuine opportunities for cultural exchange with the local people. On the
08-10-2010 | IT, New Media & Software
APF
Adventure PHP Framework (APF) 1.12 released
The free Adventure PHP Framework in version 1.12 has been released. The framework is designed to assist the developer with the implementation of object oriented and reusable PHP based web applications and encourages the use of design patterns. Release 1.12 is focused on the improvement of the programming interface (API). Generically named methods were replaced by self-explaining equivalents, code parts for PHP 4 compatibility were removed, and exceptions were introduced to
Comments about openPR
Your portal is fast, simple, and easy to use. Others may have more functions but they also demand more editing time, you have to preformat the text in order to achieve a good result etc. I think openPR is really fantastic!
Andreas Knepper, wallmedien AG