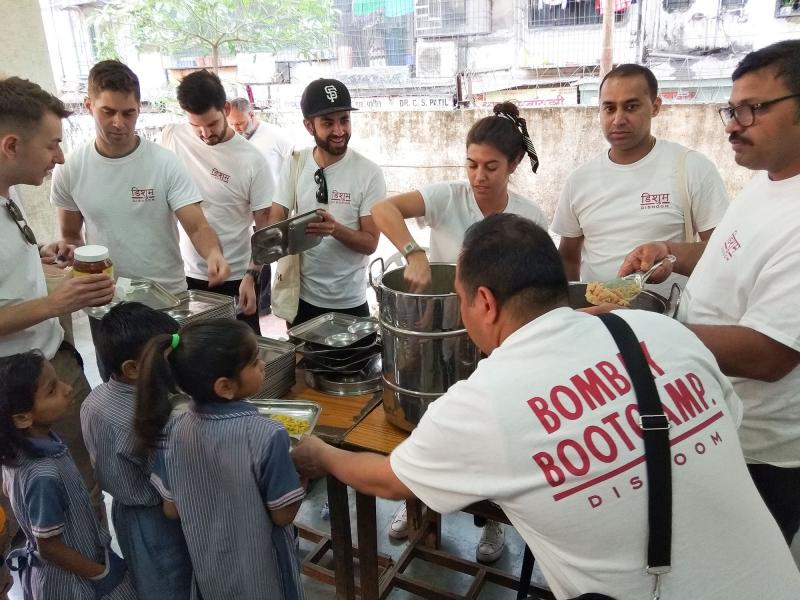 Mumbai, India - February 10, 2020: Dishoom, the renowned restaurant chain in the United Kingdom, visited two Akshaya Patra beneficiary schools in Thane, Mumbai, as part of their CSR project. During the visit, they interacted with the children and served mid-day meals to them. Dishoom is one of Akshaya Patra's biggest donors in the UK. They have contributed to over 7 million meals to the Foundation's school feeding programme since the inception of this partnership, helping deliver hot, nutritious, and hygienic mid-day meals to children every school day.The Akshaya Patra Foundation, 3rd Floor, 3rd Main Road, 1st & 2nd Stage, rajajinagar Ward No. 10, 72, Yesvantpur Industrial Suburb, Yeswanthpur, Bengaluru, Karnataka 560086About The Akshaya Patra Foundation The Akshaya Patra Foundation is a not-for-profit organisation headquartered in Bengaluru, India. The organisation strives to fight issues like hunger and malnutrition in India. By implementing the Mid-Day Meal Scheme in Government schools and Government aided schools, the Foundation aims not only to fight hunger but also to bring children to school. Since 2000, the organisation has worked towards reaching more children with wholesome food on every single school day. The Akshaya Patra Foundation is continuously leveraging technology to cater to millions of children. Its state-of- the-art kitchens have become a subject of study and they attract curious visitors from around the world. In partnership with the Government of India, various State Governments and inestimable support from many philanthropic donors and well-wishers; Akshaya Patra has grown from humble beginnings serving just 1,500 school children across 5 schools. Today, The Akshaya Patra Foundation is the world's largest (not-for- profit run) Mid-Day Meal Programme serving wholesome food to over 1.8 million children from 16,856 schools across 12 states and 2 Union territories in India.

You can edit or delete your press release Dishoom, the leading restaurant chain in the UK visited Akshaya Patra beneficiary schools here