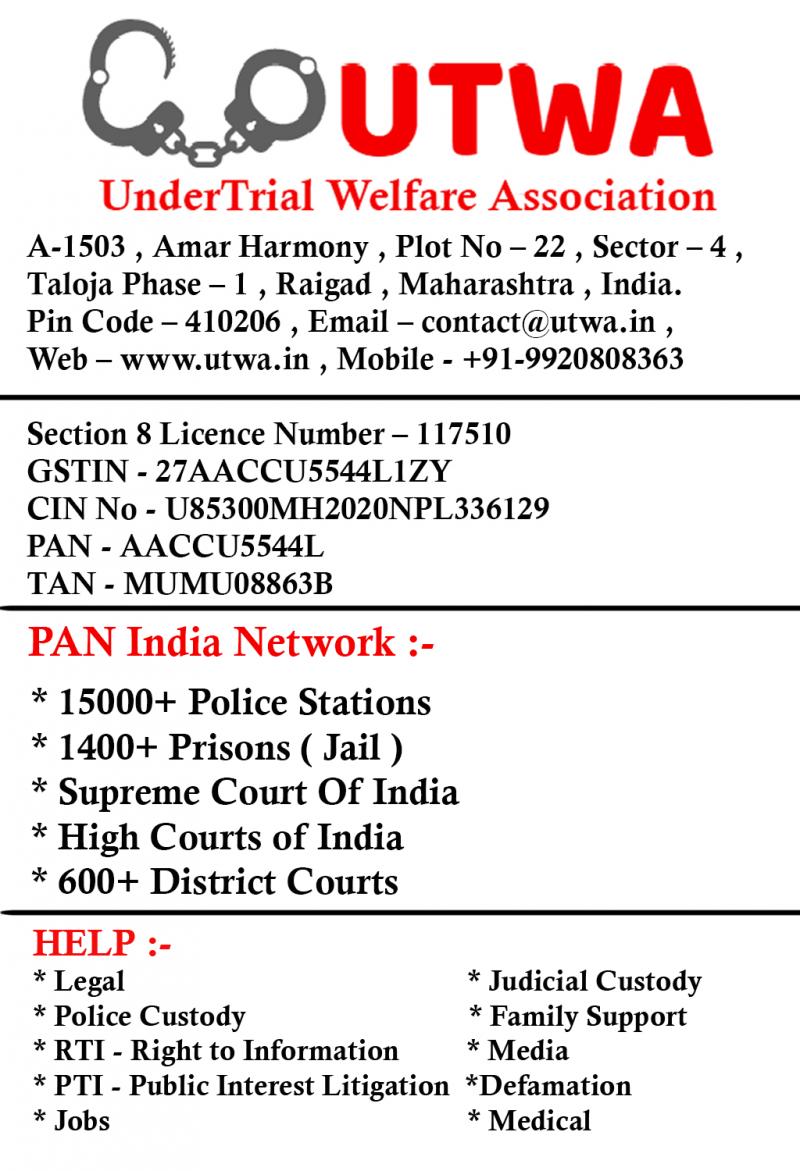 Undertrial Welfare Association is launched by Mr Digant Sharma with a vision to optimize the legal system by connecting 20 million+ Undertrials across 1400+ prisons , 15000+ police stations , 672+ district courts , High Court and Supreme Court across India. Rewriting and amendments in law - IPC , CrPC , SLL n more as per the requirement of 2020 and not when it was written before independence. Redesigning prison , correctional facilities as per the Independent democracy and not as per the British rule law. Below are the main agenda of Undertrial Welfare Association. 1. Legal :- Majority of the undertrials across India does not have enough resources to have proper legal support. UTWA will support all its members across 1400+ prisons across India with legal support. 2. Police Custody :- A lot of deaths of Undertrials in police custody has happened in the recent past. 100 deaths in 2017 as per NCRB data. So UTWA will support its members and make sure that no inhumane behaviour by the police is done to them. 3. Judicial Custody :- As we all know that once a person goes to Jail he/she has to see a new world where fight amongst inmates , inhumane torture by the police , no proper medical facility , poor quality food and much more is done to the Undertrials. UTWA will make sure that all of their members inside 1400+ prisons across India are safe, healthy and united. 4. Family Support :- Till the time the main bread earner ( Undertrial ) is inside prison , supporting their family by the way of Finance for house , food and life basics , Education to kids , taking care of Old age family members till the time the Undertrial is out of prison. 5. Jobs :- Educating and skill development of the adult family member of the Undertrial so that they can get jobs in various fields to support their family. 6. RTI :- Sending RTI to various government departments to take our information required to support the Undertrial in their case across India. 7. PIL :- If any particular matter is creating problem for Undertrial across India on a mass level and should be changed , then filing a PIL in Supreme Court of India. 8. Media :- Checking on daily basis the news Media publishes across India on various Undertrials should not harm their personal or professional integrity and lifestyle until the court has given any particular judgement on that Undertrial. 9. Defamation :- Filing defamation cases on various government and non-government agencies across India if they have damaged the personal or professional reputation of an Undertrial without any concrete proofs or evidence. 10. Medical :- Giving proper medical support to Undertrials across India. These are the main agenda of Undertrial Welfare Association to start with, with time and the data and experience we collect from our Undertrials across India we will be able to make a tailor made module per state and city to optimize the legal process and get majority of the Undertrials outside prison who have been kept inside jail for longer than expected time or granted bail by court but nobody outside to give their bail and much more. Anybody who is an Undertrial or their family member can register with us from our website www.utwa.in , for Poor people the registration charges are Rs 1 and labour contribution in the development and expansion of Undertrial Welfare Association as per your capacity and will. For normal public basic registration charges are there on the website. For rich and wealthy well wishers who liked our concept and agenda to support the Undertrial Across India can donate to open various UTWA centres across India. Detailed are there on the website or you can connect to us on :-Undertrial Welfare Association A-1503 , Amar Harmony , Plot No - 22 , Sector - 4 , Taloja Phase - 1 , Raigad , Maharashtra , India. Pin Code - 410206 , Email - contact@utwa.in , Web - www.utwa.in , Mobile - +91-9920808363 Section 8 Licence Number - 117510 CIN No - U85300MH2020NPL336129 , PAN - AACCU5544L , TAN - MUMU08863BUnderTrial Welfare Association is Section 8 company ( Non Profit Organization ) with Licence Number - 117510 , uniting the undertrials under this platform to fight against the corrupt police , lawyers , judiciary and government servants who destroy the life of innocent people by trapping them in false cases. More than 4,33,003+ people inside 1400+ prisons in India and millions outside struggling to get justice by 15000+ Urban and Rural police stations. We don't say that every undertrial who is our member is innocent but if he is then we will makesure that no government officers or institution can waste his precious life by convicting him of crimes which he/she has not done.