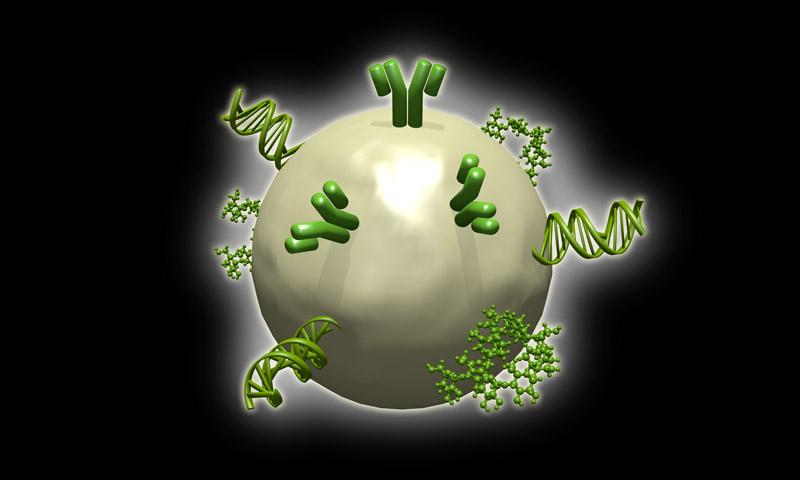 Particular introduces laser-generated nanoparticle conjugates While the gold price keeps setting new records, nanoparticles from pure gold are also gaining importance in biotechnology. Particular GmbH from Germany now uses a laser method to produce them with high purity and conjugate them with high efficiency – in amounts on the milliliter scale. Gold nanoparticles can be conjugated with biological molecules and have special optical properties that allow to detect and characterize them. While toxic dyes are still predominant in most biotech labs, gold is especially interesting when results shall be transferred to living cells and tissue, as small amounts of gold do not cause adverse effects in organisms. The gold particles have a diameter in the range of 10 nm - less than a millionth of an inch. They can be conjugated with functional molecules, such as cell-penetrating peptides or DNA. Gold does not only visualize these molecules, but can also interconnect them as a universal linker. This will, for example, allow biologists to transport their substances through cell membranes and link them with nucleic acids, helping them to detect or defeat diseases. In September 2011, Particular GmbH is launching gold nanoparticle conjugates that are, for the first time, generated by laser ablation from gold, which is not a chemical, but a physical process. It makes them unusually pure and, at the same time, cost-saving, while the particles' high surface activity helps to make use of the affinity between biomolecules and gold most efficiently. This new product series is introduced with the launch of a new catalogue on September 15. Besides ligand-free nanoparticle dispersions from pure metals, Particular now offers gold conjugates with oligonucleotides, peptides, and antibodies, perfectly dispersed in several milliliters of water. With the functionality and yield of these conjugates, the company is utilizing "gold nuggets" to pave the way for new biotech applications.More information on this web page (available from Sept. 15): http://particular.eu/gold-conjugates.htmlParticular is a nanotech company from Hannover, Germany, and started their business as a nanomaterial supplier in July 2010. The start-up is the first company to employ laser ablation in liquids for the production of nanoparticles. The particles are pure and charged, and their liquid dispersion media ensure a high quality and good and secure processability.Particular GmbH Dipl.-Ing. Niko Bärsch (CEO) Hollerithallee 8 30419 Hannover Germany E-mail: baersch@particular.eu

02-08-2011 | Industry, Real Estate & Constr …
Particular
nano tech 2011 in Tokyo: Particular GmbH presents physical nanoparticle producti …
From February 16th to 18th, the world's largest nanotechnology exhibition will take place in Tokyo, Japan. One of the highlights of nano tech 2011 is the “German Pavilion“ presenting nanotechnology expertise from Germany in a separate exhibition area. Particular GmbH is joining the German Pavilion for the first time. It enriches the technology show by a physical nanoparticle generation process: Particular is the first company to produce nanoparticles in liquids not

05-10-2021 | Industry, Real Estate & Constr …
Markilux
A Gold Award
The ‘pergola stretch’ by markilux has been awarded the Innovation Prize at the ‘R+T digital’ trade fair The ‘pergola model’ developed by awning expert markilux was able to impress with its size and sophisticated technology during the nomination of the innovation prize 2021 at the International Trade Fair ‘R+T digital’. For example, the unique toothed drive belt of this awning with folding awning cover has made it possible to build impressive
08-17-2018 | Business, Economy, Finances, B …
TMR Research
Gold Mining Market - Heightened demand 2025 | Gold Corp, Barrick Gold
Global Gold Mining Market: Overview A variety of techniques are typically used to obtain gold from gold ores in the ground. They are: placer mining, sluicing, gold panning, dredging, hard-rock mining, rocker box, and by product mining. Gold mining has been carried out since ages and is a flourishing market even today. The high demand for gold as a potential mode of investment and the use of gold for making jewelry
02-24-2011 | Business, Economy, Finances, B …
Global Gold Group
Gold Investments Remain Profitable
Gold is a precious metal that has remained to be the world's top commodity in terms of price and commercial value. Gold prices were not known to be tanking further down, along with the stocks market and the global economy, in general. It is a universal commodity and no small or big economy would deny gold. The world's demand for gold is consistently high, even higher than the production of
12-22-2010 | Business, Economy, Finances, B …
Global Gold Group
Gold Group Backs Up Gold Investment In Coins
Go for gold if you want to be safe from the dollar devaluation and skyrocketing inflation rates. Gold is known to be world's crisis commodity because of its convenience in buying and selling it in times of crisis. The prices of gold in the world market are not affected by economic indicators such as devaluation. It is distinct from other commodities and more stable because of its uniqueness and rarity,
12-15-2010 | Business, Economy, Finances, B …
Gold Bullion Resources
Gold Investment Advice
Eldora Gold Advise - When gold is found join the gold rush, it would be an investment that would make you rich! In the following article, we give you some more gold investment advice, with each detail explained to keep away from scams, fraud on investment by boiler rooms. Eldora Resources Tips: There are several reasons, why gold is so expensive, point one, it is one of the rarest elements. Two,
01-07-2008 | Tourism, Cars, Traffic
Skyrail Rainforest Cableway
Skyrail: Certified Gold Status
In recognition of its excellent environmental performance, Skyrail Rainforest Cableway has received the prestigious Green Globe Gold Certification. Only 18 groups in the world have achieved this: Skyrail is the only one in Australia. Green Globe Gold is awarded to companies who have achieved Green Globe Certification for five consecutive years, demonstrating outstanding, continuous commitment to environmental performance and improvement. Green Globe is the worldwide Benchmarking, Certification and improvement system
Comments about openPR
OpenPR ist the nicest and most clearly laid out PR platform I have seen to this day. The press releases are displayed very nicely and clearly and without any unnecessary frills. The updates are fast and the finished release looks appealing and is clearly legible. Even with 16 years of experience one discovers new things from time to time. Congratulations!
Gabriele Ketterl, Director Marketing & PR, Menads