One Concierge Goes to Rock in Rio 2011


Press release from: One Concierge 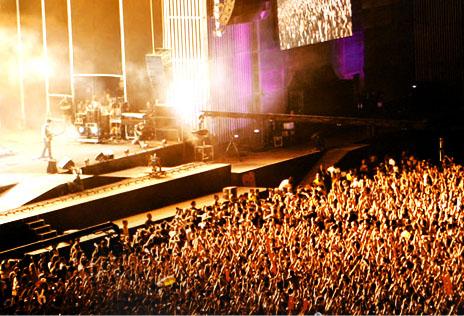 One Concierge, a global concierge and lifestyle management firm, announced today exclusive access to the Rock in Rio 2011 Festival in Rio de Janeiro. Rock in Rio has been one of the largest Rock Festivals in the world since its inception in the mid-1980s. Giving rise to Rock groups such as AC/DC, Queen, Iron Maiden, and B52, Rock in Rio has always promised to be an unforgettable experience. On the opening day in 1985, 1.3 million visitors attended to watch the 28 most influential rock bands from around the world come together and perform some of the most iconic rock songs in history. 26 years later, Rock in Rio is now one within a series of rock festivals held in Brazil, Portugal, and Spain. This year, Rock in Rio will return home for only the fourth time since its birth to Rio de Janeiro, Brazil. As one of the largest music festivals in the world, event coordinators this year anticipate welcoming a worldwide audience of over 1.8 million people. Confirmed performers for this year’s festival include Elton John, Rihanna, Katy Perry, The Red Hot Chili Peppers, Snow Patrol, Shakira, Lenny Kravitz, Stevie Wonder, and many more. With tickets available in limited quantities and close to being sold out, One Concierge is working with a number of international partners to ensure ticket procurement and VIP options for this highly anticipated event. “Being able to see artists such as Elton John, Katy Perry, and Stevie Wonder all perform on the same stage is not something that occurs every day,” said Alex Palmer, VP of Marketing & Business Development, One Concierge, "Regardless of your taste in music or preference in genre, The Rock in Rio 2011 Festival promises to leave you wanting to return each year.” One Concierge is working with a number of partners to ensure clients VIP access, reserved seating, and access to after parties during the Festival dates. In addition to experiencing each day of the festival, One Concierge is providing concert goers with a diverse portfolio of 150 on-demand concierge services while in Rio this year. One Concierge is a global provider of concierge and lifestyle management services in over 115 countries around the globe. To learn more about One Concierge's offerings for the 2011 Rock in Rio Festival please visit http://oneconcierge.com/rock-in-rio-2011?view=event One Concierge P.O Box 33414 West Palm Beach, FL, 3341 www.oneconcierge.com PRESS CONTACT: Alex Palmer alex@oneconcierge.com +1-800-628-9701

More Releases from One Concierge

12-27-2013 | Energy & Environment
One Concierge
One Concierge is globally recognized brand in the concierge and lifestyle manage …
One Concierge is globally recognized brand in the concierge and lifestyle management industry Thousands of times each day, a client connects with a One Concierge specialist. Each interaction, each request and each connection is unique and we strive to develop that relationship at every stage of our business. One Concierge has quickly grown to become a globally recognized brand in the concierge and lifestyle management industry serving clients in over 115
09-18-2012 | Fashion, Lifestyle, Trends
One Concierge
ONE CONCIERGE & THE LAVISH STORE TO PROVIDE VIP ACCESS TO RED-CARPET EVENTS/EXPE …
One Concierge (oneconcierge.com), a luxury lifestyle and enabling service, announced today that they have recently signed a Joint Venture Agreement with The Lavish Store (www.thelavishstore.com) as a partner specializing in providing high-end concierge services, unique experiences, luxury automobile rentals, helicopter charters, and more. Shortly, The Lavish Store will be introducing The Lavish Experience, in which One Concierge will act as the service fulfillment and VIP Event Access facilitator for all
07-03-2012 | Business, Economy, Finances, B …
One Concierge
One Concierge Offers Additional Ground Transport Support in Dallas, TX
As the city of Dallas continues to grow in one of the largest destinations for both personal and corporate travelers, One Concierge aims to ensure that each and every one of its clients have options to choose from. Today, One Concierge(http://www.oneconcierge.com), a luxury lifestyle and concierge provider, is proud to provide additional coverage options to clients through an agreement with Sharon Limousine (www.sharonlimousineservices.com). As a luxury concierge provider, One Concierge
06-11-2012 | Leisure, Entertainment, Miscel …
One Concierge
One Concierge Unveils New Private Membership Options
After almost a year of secrecy, One Concierge, a global concierge & lifestyle brand, is once again, opening its doors to new members. In 2011, One Concierge made headlines when it announced that it would no longer be taking new applications for membership to its global private membership programs. “We have always received a lot of interest in our private membership programs,” stated Dustyn Shroff, COO, One Concierge, “We initially