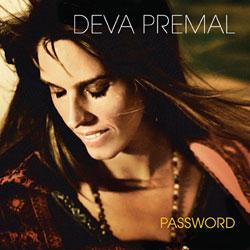 "Mantras are magical passwords that transform the mundane into the sacred" Deva Premal"PASSWORD" is the new album from the pioneer of Western mantra singing Deva Premal and represents a landmark in the genre. It was recorded with singer/writer/guitarist and life partner Miten and Nepalese bansuri maestro Manose in Copenhagen at the conclusion of their 2010 world tour.  The album marks an exciting new direction in the trio's unique blending of East and West, embedding the extraordinary energy carried by ancient mantras into a rich fusion of sound and silence.  As Deva says, "Mantras are magical passwords that transform the mundane into the sacred". An ensemble of some of Europe’s most talented young jazz musicians give Password a lyrical, spacious atmosphere, and the whole album bears its own internal rhythmic propulsion. But while the arrangements may have a more contemporary feel to them, one thing that hasn't changed is Deva's signature rich vocals, and the devotion underlying them. The new album stretches gently away from the classical chant format and provides a more accessible path to the 'inner? technology of awareness and love. Says Miten, 'When we play music together, it's like making love’. The material, mostly self-composed by the trio, features Deva's golden voice and the incredible virtuosity of Manose's bansuri (Indian bamboo flute) which merges the purity of classical Indian music with his remarkable improvisational skills. Guided by Miten and "THE ESSENCE" producer RajRishi, the album journeys through sparkling and mysterious soundscapes. The result is a haunting, seductive invitation to embrace a new and refreshing perspective on a style that is fast becoming essential listening for those looking for depth and spiritual nourishment in music. Deva Premal & Miten, the world renowned mantra singers, began their journey in love and music twenty-one years ago when they met at an ashram in India in 1990. Over the years their music has evolved into worldwide recording sales of over one million units and they consistently fill concert halls around the globe to capacity, visiting as many as 25 countries in the space of a year. Deva and Miten have received accolades from His Holiness the Dalai Lama ("?beautiful music?!"), rock icon and Grammy winner, Cher (?my favorite album for Yoga?"), motivational guru Anthony Robbins ("?passionate, powerful works of love?") and best selling author Eckhart Tolle ("?their music is pure magic?").Social Media Shop is a social media marketing agency based in the UK.Social Media Shop Jane van Velsen 3 Brook Lane, Madley Park, Witney OX28 1BP, UK +44 01993 771328

08-22-2011 | Leisure, Entertainment, Miscel …
The Social Media Shop
New album Password from Deva Premal- a pioneer of Western mantras
PASSWORD - DEVA PREMAL "Mantras are magical passwords that transform the mundane into the sacred" Deva Premal "PASSWORD" is the new album from the pioneer of Western mantra singing Deva Premal and represents a landmark in the genre. It was recorded with singer/writer/guitarist and life partner Miten and Nepalese bansuri maestro Manose in Copenhagen at the conclusion of their 2010 world tour. The album marks an exciting new direction