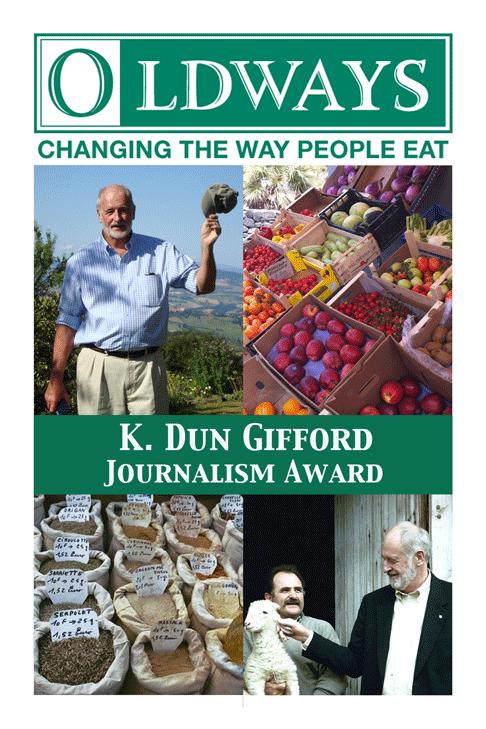 BOSTON, 2011—Oldways announces a new journalism award, named in honor of the late K. Dun Gifford, founder of the non-profit well known for creating the Whole Grain Stamp and the Mediterranean Diet Pyramid. The Annual K. Dun Gifford Journalism Award will recognize and honor the important role of communications in changing the way people eat.The K. Dun Gifford Journalism Award will go to the best national or local food and nutrition reporting from any platform - print, broadcast or online. Entries must be based on that year’s selected subject matter -- this inaugural award will celebrate the Mediterranean Diet -- and reflect one or more of Oldways founding principles: to be positive, practical, science-based, and tradition-based and celebrate the pleasures of the table.“This award is another extension of the work Dun began years ago,” said Sara Baer-Sinnott, president of Oldways. “His mission lives on through our work at Oldways and through everyone who is actively pursuing living a better, healthier life.”The Grand Prize Winner, selected by a jury including journalists Mimi Sheraton, Judith Weinraub and David Rosengarten, plus Dun’s daughter, Apple Gifford, and Oldways president, Sara Baer-Sinnott, will receive a weeklong, all expense paid trip to a region of the world selected by Oldways and reflected in each year’s rotating subject focus. The 2011 Winner will travel to the beautiful Mediterranean region. The work must have been published or aired between January 1, 2010 and September 30, 2011. Deadline for submissions is October 1, 2011. The award winner will be announced in December 2011. For more information, complete rules, or to submit entries please visit: http://www.oldwayspt.org/KDunGiffordAward.Gifford, an influential food advocate, started Oldways in 1990. He believed that positive and practical solutions, grounded in science, traditions and delicious foods and drinks, would help address the threatening tsunami of chronic diseases. Gifford invited others intrigued by his vision – scientists, chefs, restaurateurs, cookbook authors, and journalists -- to join him at the Oldways Table to address this important challenge. By documenting and educating others about the healthy “old ways,” Oldways and its partners have made strides toward changing the way people eat.About Oldways Oldways (www.oldwayspt.org) is an internationally-respected non-profit, changing the way people eat through positive and practical programs grounded in science and tradition. It is the parent organization for The Whole Grains Council and The Mediterranean Foods Alliance, and is well-known for creating the Whole Grain Stamp and the Mediterranean Diet Pyramid.Oldways 266 Beacon Street Boston, Ma 02116 Rachel Greenstein 617-421-5500