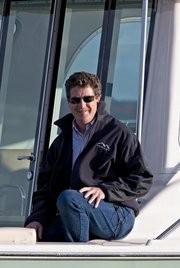 Bob Preston plans a sea odyssey to raise awareness and and funds for Parkinson's disease research.

It is 2006. Bob Preston, a young successful insurance-business owner who has a nice house, two great children, "the world's best wife," and a boat featured in the centerfold of MotorBoating Magazine is beginning to slow down and his doctors suspect Lyme disease. Test results, however, are negative. Only a "ratcheting" in his wrists gives them a clue, and at 47 years old, Bob is disagnosed with Parkinson's disease. In the five years since then, Bob has taken the disease head-on. "It is what it is. I live in the moment. I still have the same sense of humor and I don't plan to let life pass me by." And to prove it, Bob, who has a 50-ton commercial vessel captain's license, and his admiral, wife Backy, have launched the "Optimism Can Take You Anywhere Tour," an approximately 5,000-mile roung trip excursion from northern Maine to the Floriday Keys on their 37-foot Back Cove motor yacht, to raise awareness and funds for PD research. He is setting his sights to raise $150,000 for Parkinson's research, and expects that the boat trip will last until next spring. The odyssey will include stops along the way to meet with other American Parkinson Disease chapter people, give media interviews to highten awareness and to raise rsearch funds. As he progresses along the East Coast, you can follow on his Facebook page (Bob Preston Cure PD) and on Twitter @Cure PD. To support Bob's Optimism Tour visit http://apdaparkinson.donordrive.com/participant/bobprestonpd.The American Parkinson Disease Association is the largest grassroots organization serving the 1.5 million people in the United States, their families and caregivers. Operating through a national network or centers for advanced research, chapters and patient information and support centers, APDA meets its unique dual mission to "Ease the Burden - Find the Cure" for Parkinson's disease.K.G. Whitford American Parkinson Disease Assocation Parkinson Plaza 135 Parkinson Avenue Staten Island, New York 10305

01-13-2012 | Politics, Law & Society
Jackson Walker L.L.P.
Bob Latham Elected to International Rugby Board Executive Committee
Jackson Walker partner Bob Latham recently became the first American elected to the International Rugby Board Executive Committee in the organization’s 125-year history. It is a significant achievement for Mr. Latham, who joins an elite group of 10 who direct the activities of the International Rugby Board. Based in Dublin, the IRB is rugby’s international governing body. Mr. Latham’s election is also a milestone for American rugby, which gains an
01-12-2012 | Advertising, Media Consulting, …
Charley's Grilled Subs
Charley’s Grilled Subs Promotes Bob Wright to President
Charley’s Grilled Subs, the international Philly Cheesesteak Sandwich franchise, has promoted Bob Wright to President and Chief Operating Officer to help guide the brand into the future. Bob Wright was named COO for Charley’s Grilled Subs in 2010. Since joining the company, Wright has been responsible for company and franchise operations, purchasing, training and marketing. As President, Wright will now assume the responsibilities for HR, IT and Business Analytics at
08-15-2011 | Arts & Culture
Artisan Galleries
Artisan Galleries release rare new Bob Dylan collection
Essex, United Kingdom (11 August, 2011) - Artisan Galleries, one of the UK's leading family-run art dealers are privileged to announce the release of Bob Dylan's 2011 'Drawn Blank' limited edition, hand-signed paintings. With five prestigious galleries across London, and a world-wide community online, Artisan Galleries are able to offer home viewings, events evenings, and completely free world wide delivery. Additionally, their interest free credit scheme affords UK clients the
07-25-2011 | Arts & Culture
Artisan Galleries
Artisan Galleries Announce Exhibition of Bob Dylan Paintings
Essex, United Kingdom (18 July, 2011) – Artisan Galleries, a leading online supplier of affordable fine art with five celebrated galleries across London, are pleased to announce that they are now exhibiting a new collection of graphics drawn by Bob Dylan, as well as being in possession of one of the most iconic pieces from the collection. In 1994, Bob Dylan had several of his drawings published in the book Random
06-23-2011 | Media & Telecommunications
Creativecrest
Valuepoint Knowledgeworks announces Bob Myers as CEO
BANGALORE, June 21, 2011 -- Valuepoint Knowledgeworks, a language services provider that serves clients in USA, Europe, India and Singapore, has announced that Mr. Bob Myers has been named Chief Executive Officer (CEO) of the organization. Bob succeeds Mr. A. Gururaj, who assumes the role of President and Chief Revenue Officer. Headquartered in Bangalore, India, Knowledgeworks looks to grow and expand their global market share by focusing their expertise on
11-29-2010 | Arts & Culture
Voices.com
Bob Bergen Guest Stars On Voice Over Experts
Bob Bergen is an Emmy award nominated voice actor with over twenty-five years in the voiceover industry. Bergen’s impressive resume is a testament to his knowledge of the industry and why is one the most highly respected voice over coaches throughout North America. Bergen joins Voice Over Experts to discuss "Marketing and Goals" in a wonderful podcast lesson. He explains why setting goals should be the first thing talent do when
Comments about openPR
9 o'clock: discuss press release with client, 10 o'clock: submit release to openPR, within the briefest possible time release is published and displayed in a prominent place on openPR.de. I am thrilled!
Zehra Spindler, Calypso Now! - Communication Agency