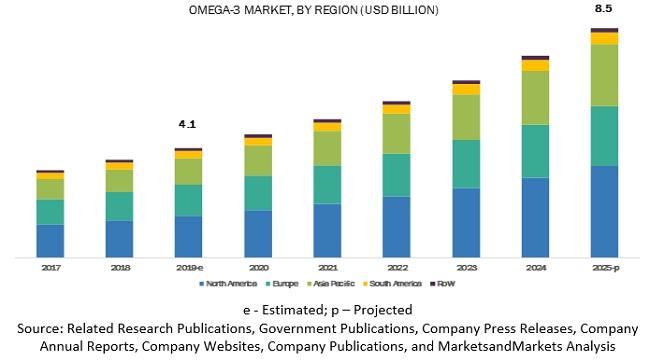 The report "Omega-3 Market by Type (DHA, EPA, and ALA), Application (Dietary Supplements, Functional Foods & Beverages, Pharmaceuticals, Infant Formula, and Pet Food & Feed), Source (Marine and Plant), and Region - Global Forecasts to 2025", the global omega-3 market is estimated to be valued at USD 4.1 billion in 2019 and is projected to reach USD 8.5 billion by 2025, recording a CAGR of 13.1%. Consumer awareness regarding the health benefits of omega-3 and an increase in application profiling and existing applications finding new markets are the factors that are projected to drive the growth of the global omega-3 market.

The infant formula application segment is projected to witness the fastest growth, in terms of value, during the forecast period

By application, the infant formula segment is projected to grow at the highest CAGR. This is due to the growing awareness among the parents to combat the deficiencies of omega-3 in the infants. Many women these days suffer from omega-3 deficiencies due to which adequate amount of EPA and DHA, which is required for infant brain development, is not passed on to the infants through breast milk. Due to these factors, the omega-3-rich infant formula is projected to grow at a higher growth rate.

Based on the source, the omega-3 market is segmented into marine and plant. The marine source of omega-3 is estimated to account for a larger share due to the large EPA and DHA content in most of the oily fishes such as salmon. Most of the manufacturers are also manufacturing marine-based omega-3 to meet the growing demand for EPA and DHA, which are not abundantly present in other plant-based sources.

The omega-3 market in Asia Pacific is projected to witness high growth due to rising awareness about its health benefits and increasing disposable income of the population in the Asia Pacific countries. With the growing inclination toward healthy aging in the region, the adult population prefers consuming dietary supplements, including omega-3, as per the recommendations by the Global Organization for EPA & DHA Omega-3 (GOED). Moreover, in Asia Pacific countries, the governments are also focusing on and promoting fortified foods, and many big brands such as BASF (Germany) and Croda International (UK) have expanded their operations in these countries to cater to the growing demand for omega-3. Key manufacturers prefer expanding in the Asia Pacific region, as it provides cost-effective benefits during production and processing. The high demand for omega-3 and low cost of production are the major factors that are projected to encourage suppliers and manufacturers to invest in this market. In addition, Asia Pacific has the highest growth potential due to factors such as high economic growth and the increase in income of individuals in the region. The high population growth and increase in FDI are factors that are driving the growth of the omega-3 market.

This report includes a study on the marketing and development strategies, as well as the product portfolios of the leading companies operating in the omega-3 market. It includes the profiles of leading companies such as Epax (Norway), Croda International (UK), Golden Omega (Chile), GC Rieber (Norway), Cargill (US), DSM (Netherlands), BASF (Germany), Lonza (Switzerland), KD Pharma (Germany), and Pharma Marine (Norway).

02-19-2020 | Health & Medicine
MarketsandMarkets.com
Breast Imaging Market Growing at a CAGR of 8.0% | Breast Imaging Technologies Ma …
Market growth is largely driven by factors such as technological advancements, the rising prevalence of breast cancer, the increasing number of screening programs as well as rising number of conferences and symposiums focusing on spreading awareness about the benefits of early screening and diagnosis. The emerging markets, growing government and private investments to meet the increasing demand for breast cancer screening, and the improving reimbursement scenario are expected to present
02-19-2020 | Health & Medicine
MarketsandMarkets.com
Empty Capsules Market 2020: Compound Annual Growth Rate (CAGR) of 7.4%
Empty capsules market are the growing adoption of capsule formulations among the growing geriatric population, the growth of the pharmaceutical market with the increasing R&D activities & clinical trial studies, and the advancements in capsule delivery technologies. MarketsandMarkets forecasts the Empty Capsules market to grow from USD 1.95 billion in 2018 to USD 2.79 billion by 2023, at a Compound Annual Growth Rate (CAGR) of 7.4% during the forecast period. Download PDF
02-18-2020 | Health & Medicine
MarketsandMarkets.com
Biosurgery Market 2020: Opportunity and Challenge for New Market Entrants
Biosurgery market are the rising geriatric population, increase in the volume of surgeries and sports-related and trauma injuries, increasing clearance of biosurgery products by regulatory authorities and growing need for effective blood loss management in patients. MarketsandMarkets forecasts the biosurgery market to grow from USD 11,365.0 million in 2018 to USD 15,581.7 million by 2023, at a Compound Annual Growth Rate (CAGR) of 6.5% during the forecast period. Download PDF Brochure
02-18-2020 | Health & Medicine
MarketsandMarkets.com
Angiography Equipment Market Global Research Segment, Revenue & Analysis and For …
The growth in this market is attributed to the high prevalence of diseases such as cancer and CVDs, increasing product approvals for advanced angiography techniques in the market, the large number of ongoing research activities, growing government and public-private investments, increasing number of awareness programs, and rising adoption of angiography devices due to a large number of angiography procedures performed across the globe. The angiography equipment market was valued at USD