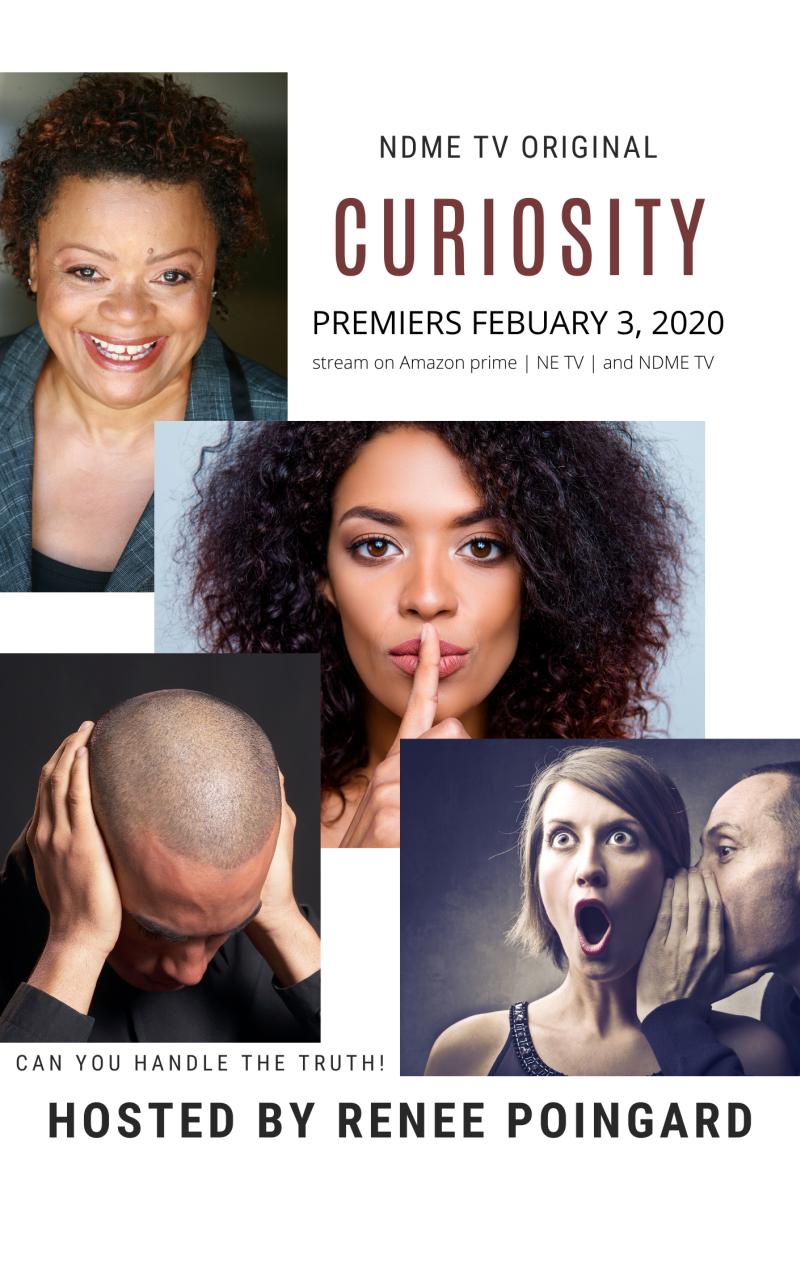 NDME TV network to premiere the all new heart ponding reality tv talk show, “Curiosity” in February. http://www.ndmetv.comGNA Universal Media today announced that NDME TV will air its highly anticipated new TV Talk series “Curiosity” on February 3, 2020. Hosted by the “CV Indie Film Awards” winning actress, Renee Poingard, “Curiosity” promises to uncover the truth of what those in your inner circle really think about your character. The shocking reveals will either cause show participants to fight back in defense or rethink their sometimes overly exaggerated options of themselves and choose to take the take the high road to positive change. http://www.GNAUniversalMedia.com The show producer, and award winning independent filmmaker, Gina Carey, quotes “ I was astonished to learn that only a small percentage of people who are regularly in your inner circle are completely honest about how they really feel about you. That led me to wonder how many people, under a confidential setting, would be willing to open up and share their truth about their closest friends and family for the sole purpose of their growth? This is where the show idea derived from. When I decided to produce this show, I was amazed at how many people wanted to know what people thought about them. On the flip side, I feel as though this show will help us grow and learn what we may not even realize about how we’re being viewed through the eyes of our closest companions and either work on those flaws or make better friend choices. Either way, it’s a win, win situation”.NDME TV , “Curiosity,” is an unscripted , true reality TV talk show. The show executive producer and producer is, Gina Carey Writer/ Director/ Producer/ Editor / Cinematographer , “The Unexpected”– Feature Film -Feb 2016 , “Aspire to Inspire”– Feature Documentary-Feb 2016 , “The Assumptions”– Feature Film-Feb 2017 , “The One Year Pact”– Feature Film-Feb 2018 , “Rose England”– Feature Film- Feb. 2019 , “Acts of Kindness”– Feature Film –March- 2019 and "The Star Connection" - Feature Film - March -2020. “ Curiosity’s” assistant producers are Kimberly Blount and Nikisha Keys. Season 1 of “Curiosity” consists of six half-hour episodes, each with an explosive reveal that will have viewers heart pounding as they together open Pandora’s box. Curiosity airs on February 3, 2020. Watch on NDME TV. Com or stream on Youtube, NE TV.Com or Amazon Prime. “ Curiosty” can also be streamed through, Smart TV. Firestick and Roku tv by downloading the NETV App in your app store. For times and listings, visit NDMETV.com.GNA Universal Media 3111 E Tahquitz Canyon Way, Suite #135 Palm Springs, CA 92262 Office: (760) 340-1575 Voice: (760) 678-5815GNA UNIVERSAL MEDIA is a enterprise that serves as the home that houses multiple independent entertainment arts companies. Our affiliate companies include Film, Radio, TV, Online Publications, Music and Events. We are committed to growing new achievers!OUR MAIN OBJECTIVE is to bring global awareness and act as liaison to new and emerging independent arts companies