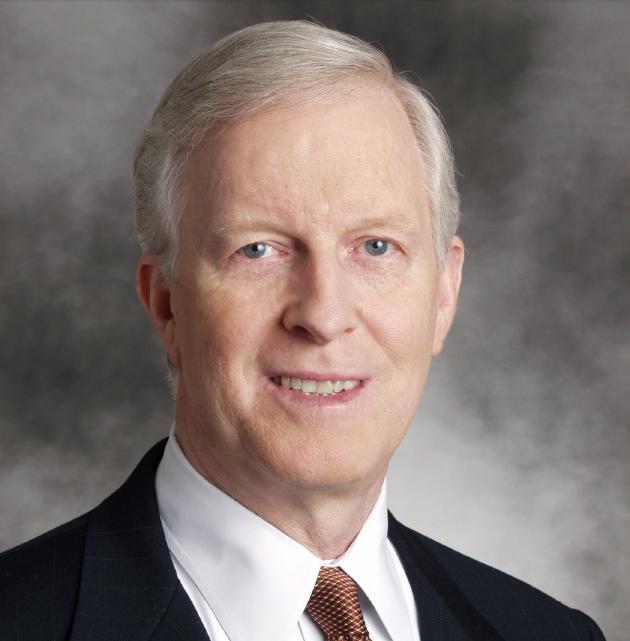 GARDEN CITY, NY, August 2011—Adelphi University has elected Robert B. Willumstad ’05 (Hon.), co-founder and partner at Brysam Global Partners, as the new chairman of the Board of Trustees, succeeding Thomas F. Motamed ’71, for the 2011-2012 term. Helene R. Sullivan ’79, formerly the chief financial officer at Save the Children, was named vice-chair. Frank Angello ’77, senior vice president and chief financial officer at Lighthouse International, became secretary of the Board. Mr. Willumstad has been an Adelphi Trustee since 2005 and previously served as vice-chair of the Adelphi Board. In 2007, he helped co-found Brysam Global Partners—a unique private equity firm that invests in financial services, particularly in emerging markets—and is now a partner at the firm. He is the former chairman of AIG and, before that, was president and chief operating officer at Citigroup in 2005. Prior to his work with Citigroup, Mr. Willumstad spent 20 years with Chemical Bank in various roles, including president of Chemical Technologies Corporation, and served in the Marine Corps Reserve for five years. He was previously on the board for Habitat for Humanity International. Mr. Willumstad is the recipient of the 2002 Frederick Douglass Award from the New York City Urban League for his advocacy of corporate diversity programs. He received an Honorary Doctor of Laws from Adelphi in 2005 for his corporate leadership and dedication to improving the community. Ms. Sullivan, an Adelphi Trustee since 2008 and former secretary of the Adelphi Board, has been heavily involved with Save the Children, an organization dedicated to improving the lives of children worldwide through sustainable community-based strategies, for more than two decades. She is currently a trustee of both Save the Children and Save the Children International. Ms. Sullivan received a B.B.A. from Adelphi in 1979. Mr. Angello, elected to the Board in 2007, brings 26 years of experience in senior-level roles at JPMorgan Chase, most recently as the chief financial officer of the Treasury and Securities Services Division. Currently, he is the senior vice president and chief financial officer at Lighthouse International, an organization which seeks to treat and prevent vision loss and to empower those living with it. Mr. Angello received his M.B.A. in finance from Pace University and a B.B.A. in 1977 from Adelphi. He and his wife, Phyllis, have two adult sons, one of whom graduated from Adelphi in 2011.About Adelphi University: Adelphi is a world class, modern university with excellent and highly relevant programs where students prepare for lives of active citizenship and professional careers. Through its schools and programs—The College of Arts and Sciences, Derner Institute of Advanced Psychological Studies, Honors College, Ruth S. Ammon School of Education, University College, and the Schools of Business, Nursing, and Social Work—the co-educational university offers undergraduate and graduate degrees as well as professional and educational programs for adults. Adelphi University currently enrolls nearly 8,000 students from 41 states and 60 foreign countries. With its main campus in Garden City and centers in Manhattan, Hauppauge, and Poughkeepsie, the University, chartered in 1896, maintains a commitment to liberal studies in tandem with rigorous professional preparation and active citizenship.Adelphi University 1 South Avenue Garden City, NY 11530Kali Chan, Director of Media Relations chan@adelphi.edu


More Releases for Board

01-12-2018 | Logistics & Transport
IVU Traffic Technologies AG
IVU expands Executive Board
Leon Struijk to manage Projects and Sales as CCO Berlin, 12 January 2018 – IVU Traffic Technologies AG is expanding its Executive Board: Effective 1 February 2018, Leon Struijk will join the managing body of the Berlin-based IT specialist for public transport. Besides CEO Martin Müller-Elschner and CTO Matthias Rust, he will be CCO (Chief Customer Officer) with responsibility for Projects and Sales. Leon Struijk (47) comes from the Netherlands, where he
10-26-2017 | Tourism, Cars, Traffic
ReportsWeb
Tourism Board Marketing Board Marketing Index
ReportsWeb.com published “Tourism Board Marketing Market” from its database. The report covers the market landscape and its growth prospects over the coming years. The report also includes a discussion of the key vendors operating in this market. Publisher's "Tourism Board Marketing Index", measures the marketing efforts of 100 tourism boards around the world. The Tourism Board Marketing Index provides an insight into the individual marketing performance of different tourist boards. To compile
02-22-2017 | Science & Education
Reporthive
Global Led Writing Board
Global Led Writing Board: Led Writing Board Report by Material, Application, and Geography – Global Forecast to 2021 is a professional and in-depth research report on the world's major regional market conditions, focusing on the main regions (North America, Europe and Asia-Pacific) and the main countries (United States, Germany, united Kingdom, Japan, South Korea and China). For sample report: http://www.reporthive.com/request-sample.php?id=809563 The report firstly introduced the Led Writing Board basics: definitions, classifications, applications and
11-29-2016 | Business, Economy, Finances, B …
ReportsWorldwide
High-Speed Board-to-Board Connectors
ReportsWorldwide has announced the addition of a new report title High-Speed Board-to-Board Connectors to its growing collection of premium market research reports. Bishop & Associates research report, High-Speed Board-to-Board Connectors, analyzes high-speed connectors used to connect boards, memory modules, hard drives and solid-state drives in electronic systems and how these connectors are changing as a result of new data center and communications architectures. • What are the market drivers that influence the
12-23-2013 | Science & Education
iversity
iversity creates Advisory Board
Bernau bei Berlin, 18 December 2013 – To prepare for the successful expansion of its online learning platform, iversity announces the creation of an independent advisory board. The founding members include former iversity CEO, Marcus Riecke, who will be joined by Jörg Dräger, PhD, managing director of the CHE (Centre for Higher Education). Additional members will be named in the months to come. Among other duties, the board will
01-25-2011 | Industry, Real Estate & Constr …
TCAR
TCAR Elects 2011 Board
RALEIGH, N.C. (January 24, 2011) – TCAR, the Triangle Commercial Association of REALTORS®, announces today its 2011 board of directors. The organization serves real estate practitioners, appraisers, property managers and other professionals within a 14-county area. 2011 board members include: Executive Committee Shane Bull, Grubb & Ellis, President Bret Muller, Capital Associates, Past President Kerry Saunders, NAI Carolantic Realty, Inc., President-Elect Henry Ward, York Properties, Treasurer Joni Barnes, Pinpoint Properties Kim Brennan, Executive Officer Christina Coffey, Hunter & Associates Kathy
Comments about openPR
I can't but agree to the positive statements about your portal: easy to use, clear layout, very good search function, and quick editing!
Jens O'Brien, Borgmeier Media Communication