Kuwait Retail Pharmacy Market is Expected to Reach about KD 600 Million in Terms of Revenue by 2022: Ken Research 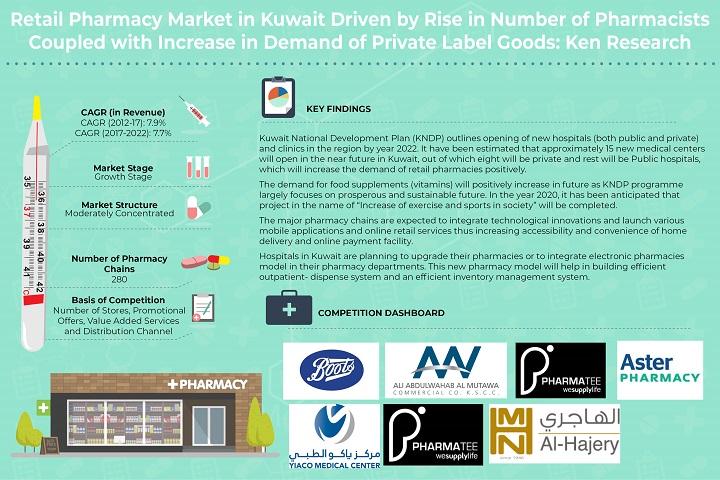 You can edit or delete your press release Kuwait Retail Pharmacy Market is Expected to Reach about KD 600 Million in Terms of Revenue by 2022: Ken Research here

02-07-2023 | Health & Medicine
Ken Research
Qatar Blood Gas & POC Immunoassay Analyzer Market is currently in its Growing St …
1. Reagent price and type of device are the predominant factor that are influencing the growth of BGA devices amongst healthcare facility in Qatar When it comes to BGA segment in Qatar's Blood Gas & POC Immunoassay Analyzer Market, the ecosystem is well positioned with a limited number of players operating in the market. These players are competing on the basis of cost per test, testing parameters, design and portability of the
02-07-2023 | Advertising, Media Consulting, …
Ken Research
The EV Charging equipment market is growing rapidly, owing to New Manufacturing …
Driven by an increased focus on sustainability, and government initiatives, the EV Charging equipment market in KSA has ample growth potential in the coming years. Manufacturing of EV charging equipment: KSA is one of the Middle East's fastest expanding economies, which allows the Kingdom to diversify and experiment when it comes to investing in new areas. It is an import-oriented market when it comes to the manufacturing of EV charging equipment.
02-07-2023 | IT, New Media & Software
Ken Research
Growth in E-Commerce, Cloud Computing, New Industrial Spaces, and Government Ini …
Focus on Cashless Transactions, Adoption of Cloud Technology, Cybersecurity and Data Center Co-Locators and Investors Are Major Factor Contributing Towards Development of Data Center Market in Philippines. Demand buoyed by internet users: The longest online usage time worldwide is in the Philippines, where 76 Mn people use the internet daily for an average of 10.5 hours. The Philippines has become an important site for data center construction because of its internet
02-03-2023 | Health & Medicine
Ken Research
Future outlook of India Rapid IVD Kits Market: Ken Research
1. The India Rapid IVD Kits Market is growing at a CAGR of ~113% (FY'2017-FY'2022), owing to a rise in awareness of Rapid IVD Tests due to the pandemic. The Rapid IVD Kits Industry has emerged as an attractive player in India's growing healthcare sector and is one of the fastest-growing service segments in the country. To Know More about this report, download a Free Sample Report @ https://www.kenresearch.com/sample-report.php?Frmdetails=NTYxNDE3 The sector is largely