The Most Important Scientific Discovery of 2019: Seismic Universe


Press release from: Journal of Geophysics 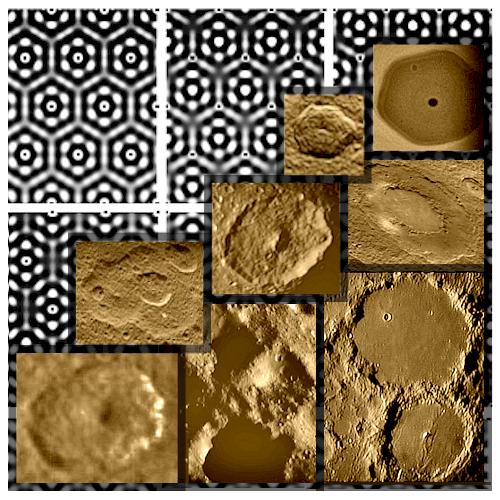 Study of earthquakes and moonquakes finds strong (M6+) seismicity and tectonics are caused by externally excited resonance instead of mantle convection/inner heat. LOS ANGELES, 30/31.12.2019. In the most important scientific discovery of 2019 and the most significant geophysical find of all time – published in the world's oldest geophysics periodical the Journal of Geophysics (https://n2t.net/ark:/88439/x020219 and https://n2t.net/ark:/88439/x034508) – Dr. Mensur Omerbashich showed that Earth plate tectonics and M6.2+ (tectonic) earthquakes are caused by externally forced mechanical resonance rather than mantle convection (internal heat) as thought by some. The discovery of resonance seismotectonics enables anti-forecasting (seismic quiescence prediction) months ahead globally, and, for the first time, sets the course for physics-based and Earth-tailored earthquake prediction. The phenomenon of resonating vibration, or resonance, occurs when a physical system's natural period of oscillation matches another physical system's period of oscillation (or its fractional multiple). We speak of mechanical resonance when the physical systems involve vibrating bodies of mass or electrical resonance when electrical circuits are involved. As gravitational vectors in our Solar system's plane regularly stir masses of the rotating Earth, this disturbance under the right conditions magnifies the input tidal energy by 100s of times. Earth tectonic plates act as oscillating bodies of mass themselves, each with its natural vibration period. In simplest terms, mantle convection models are designed such that they break down if one can demonstrate a coupling between continents and flows in the mantle – for example, a prominent Richter-McKenzie 1977 model in the same journal, https://n2t.net/ark:/88439/y001916. Then this demonstration of a continent-mantle global coupling mechanism from successive M6.2+ (tectonic) earthquakes in the most extreme band of energies on Earth means that the same resonance and not convection drives the Earth's tectonic plates. By analyzing the times of earthquakes occurrences in the USGS, GFZ, and EMSC records, Omerbashich extracted a complete set of periods of so-called superharmonic resonance that shakes the Earth's mantle and crust. It is the first detection of a seismic periodicity describing a physical phenomenon and the second ever of a full resonance periods bundle in any global data since the discovery of Schumann resonance in the 1960s. To extract periodicity, Omerbashich used a least-squares spectral analysis method favored by astronomers and of the highest accuracy in computing periods from gapped data such as most of the natural-data sets. Omerbashich then analyzed the times of all Apollo Program's moonquake events – as a spatially (384,000 km apart) and temporally (half a century apart) independent verification. This moonquakes analysis resulted in the detection of the Moon's superharmonic resonance. Such independent confirmation of resonance tectonics and so its universality unveiled the external (astrophysical) cause of plate tectonics, as hinted by Alfred Wegener. One of the greatest strengths (to the point of impossibility to question the result) and the fascinating aspects of this discovery is that it is direct. Thus the analysis has captured continents and tectonic plates as they "ride" on mantle's resonance waves (rather than merely implying resonance from some intermediary data) while cyclically snapping into M6.2+ quakes at precisely those resonance periods. As the Earth is the only body in our Solar system with plate tectonics and one moon, this discovery is of great importance for our colonization of Space. Due to interference, astronomical bodies with two or more moons experience no plate tectonics the same as those without a moon. This causality enables us to instantly both revive the Mars plate tectonics and halt the Earth's tectonics before it ends in energy overload – by tractoring the smaller of two Mars's moons, Deimos, into the Earth's orbit to make Deimos a secondary moon of Earth's. This discovery is a culmination of 15-years long research that Omerbashich began at the Berkeley National Laboratory, where he generalized the concept of mechanistic tectonics. That approach has led him to successfully expressing the Newtonian gravitational proportionality G (and thus gravity) via speed of light at both every-day and quantum scales ( https://arxiv.org/abs/physics/0608026 ), just as Einstein hinted in his rare geophysics work. That derivation also represents the first proof of Multiverse of Tegmark's level I in which other universes orbit about our universe, and the disproof of any alternative types (fairy-tale scenarios). Previously unexplained yet widely spread polygonal (mostly hexagonal) "cratering" – photographed by various Space probes throughout our Solar system (image) – is reproduced in resonance experiments. This consistency supports the result that the mechanical resonance is a cross-scale universal physical phenomenon, but one ignored in the past. As such, we must consider it in addition to or instead of gravitation and fundamental physical forces. Numinous concepts – used to patch up failed cosmological theories commonly based on the "Big Bang" scriptural forgery by a Catholic Church's employee such as "black holes", "dark matter" and "dark energy" (all of which can only be inferred but never observed, conveniently for the Church as usual) – are not required anymore, as this discovery unveiled the "Holy Grail" of physics from observing whole Earth and whole Moon as our largest tangible laboratories of all. Journal of Geophysics 3501 Jack Northrop Ave, Suite T6172 Hawthorne CA 90250 +1-424-425-0901 office@geophysicsjournal.com Press contact: editor@geophysicsjournal.com The Journal of Geophysics (Impact Factor 32), the world's oldest geophysics periodical, is a premier scholarly journal for publishing high-quality original research papers of exceptional and potentially fundamental importance to most subfields of geophysics. These include but are not limited to: theoretical and applied geophysics, planetary physics, tectonophysics, seismology, physical and space geodesy, geodynamics, mathematical geodesy and geophysics, and atmospheric physics. Geology papers will be published if they are of great value to geophysics.

You can edit or delete your press release The Most Important Scientific Discovery of 2019: Seismic Universe here

10-12-2018 | Fashion, Lifestyle, Trends
Mentality Cosmetics, Inc.
Leaked! Earth Tone Holo Collection
Mentality Cosmetics leaks first photo of the highly requested Earth Tone Holographics by Mentality Nail Polish. The 10 piece collection features signature Mentality holographic sparkle in the sunlight, which are subdued indoors for work appropriate settings. Limited collections will be available soon. Find out more information at http://www.mentalitynailpolish.com/blog/leaked-earth-tone-holographic-collection Mentality Cosmetics, Inc. is owner of the world's most exclusive nail polish brand. Founded in 2012, they survived corporate sabotage by their manufacturer and successfully
04-18-2017 | Advertising, Media Consulting, …
Fior Market Research
Global Lutetium Oxide Market 2017 - Treibacher, China Minmetals Rare Earth, Long …
Global Lutetium Oxide Market Research Report 2017 Global Lutetium Oxide Market 2017, presents a professional and in-depth study on the current state of the Lutetium Oxide market globally, providing basic overview of Lutetium Oxide market including definitions, classifications, applications and industry chain structure, Lutetium Oxide Market report provides development policies and plans are discussed as well as manufacturing processes and cost structures. Lutetium Oxide market size,
03-01-2017 | Advertising, Media Consulting, …
Global Market Research
Global Rare Earth Metals Market 2017- Beifang Rare Earth, Jiangtong Rare Earth, …
Global Rare Earth Metals Industry 2017 is a comprehensive, professional report delivering market research data that is relevant for new market entrants or established players. Key strategies of the companies operating in the market and their impact analysis have been included in the report. Furthermore, a business overview, revenue share, and SWOT analysis of the leading players in the Rare Earth Metals market is available in the report. Download Sample Report
09-06-2013 | Industry, Real Estate & Constr …
Earth Infrastructurs Limited
Earth Titanium and Earth Gracia Get Propitious Commencement
Bhoomi Poojan of both the Greater Noida based Projects with Excellence and Lifestyle Earth Titanium is a Hi-Tech City of Excellence studded with modern offices, IT spaces, studios, retail, villas and institutional areas. Earth Gracia is a high-end open lifestyle based residential project which gives the feeling of openness at the very first impression. Many new and ground-breaking real estate projects in Delhi - NCR have made the region as one of the
01-24-2013 | Arts & Culture
Strychnin Gallery
ATTENTION EARTH!
It’s the year 2013, if you’re reading this Earth has shockingly survived the Mayan prediction and prophetic date of December 21st, 2012. Since this is being written in the past, it’s not certain what has happened to humankind. Did Earth collide with planet X? Or was the cataclysm of 2012 a positive physical and/or spiritual transformation for humanity. Be as it may, hopefully this day will mark the beginning of
04-13-2012 | Industry, Real Estate & Constr …
Earth Infrastructurs Limited
Earth Iconic launched in Gurgaon
It’s called Earth Iconic, and it’s sure to roll-up into a rage in the Gurgaon realty sector. Delhi NCR-based realty major Earth Infrastructures Ltd. launched its yet another ambitious project called Earth Iconic at Sector-71 in Gurgaon. Spread across 3.75 acres of prime landscape and set within the increasingly popular concept of commercial mixed land use, Earth Iconic offers retail shops, entertainment zone, food courts, studio apartments and unfurnished
Comments about openPR
I can't but agree to the positive statements about your portal: easy to use, clear layout, very good search function, and quick editing!
Jens O'Brien, Borgmeier Media Communication