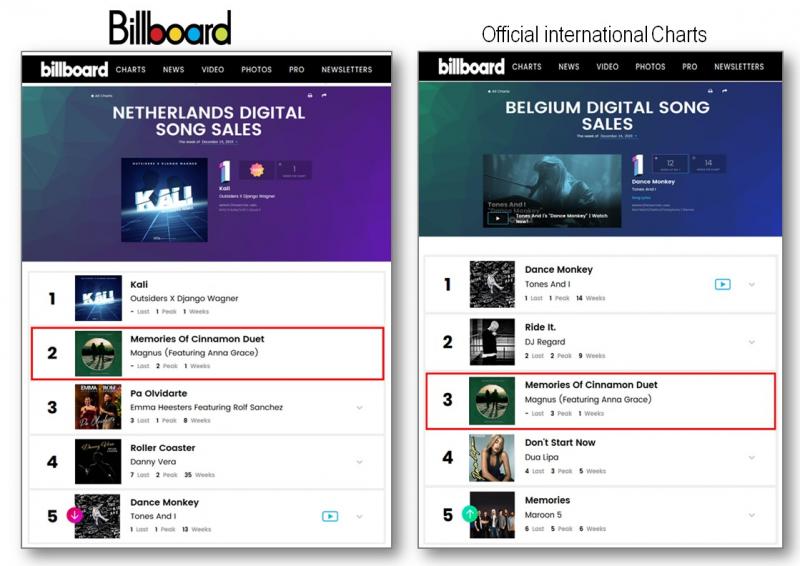 With his current Christmas single "Memories Of Cinnamon" the musician Magnus once again made the leap into the international billboard charts and that in two countries at the same time. Since December 14, 2019, the Christmas single is number 2 in the Netherlands in the Billboard Charts and number 3 in Belgium.Previously, Magnus also managed this with his new album OUTSIDE on November 9, 2019 and here in the US Billboard Charts for the best-selling digital albums in the dance / electronic genre. The single LASCIVIOUS, which was released in September, also reached the billboard charts on October 5, 2019 in the Netherlands at number 1 and in Belgium at position 5.Before him, no German musician was able to hit the billboard charts in two countries with two singles and one album in three countries. This makes MAGNUS one of the currently most successful German musicians in the foreign charts. Also in the iTunes sales charts He recently reached number 1 in the genre charts with these two singles and the new album in 6 countries and always top 5 in all countries under all genres.This is also why MAGNUS is currently probably the most international German musician who only performs his songs in English and also composes himself. In its November 2019 edition, Rolling Stone Magazine describes the music of MAGNUS as "extroverted pop music", combining EDM with pop music and therefore probably has numerous relevant charts. In October 2019, the single "Do Not Cry" from MAGNUS was officially proposed twice by the Grammy music jury in LA to nominate the Grammy Award for "best pop solo performance" and the remix version as "best remix version".Further information: Homepage: www.musicmagnus.com YouTube: https://www.youtube.com/watch?v=VpNFtJuxFlEMedia contact management: DM- Magnus music Manuela Ceresa (management) Gasteinerstr. 47, 47249 Duisburg Germany phone: 0203-7388014 fax: 0203-7388015 mail: mc.magnus.music@magnu.netEditor Pecunia is the editor of the TV series Pecunia which has been produced since 2010 and is broadcast nationwide by various regional TV stations. DM- Magnu music is a German record label. The label produces and publishes music as well as music videos. The main artist of the label is MAGNUS. The label also includes the publishing house DMagnus publishing. Management: Manuela Ceresa.