The Key to Understanding Donald J. Trump - By Kobby Barda 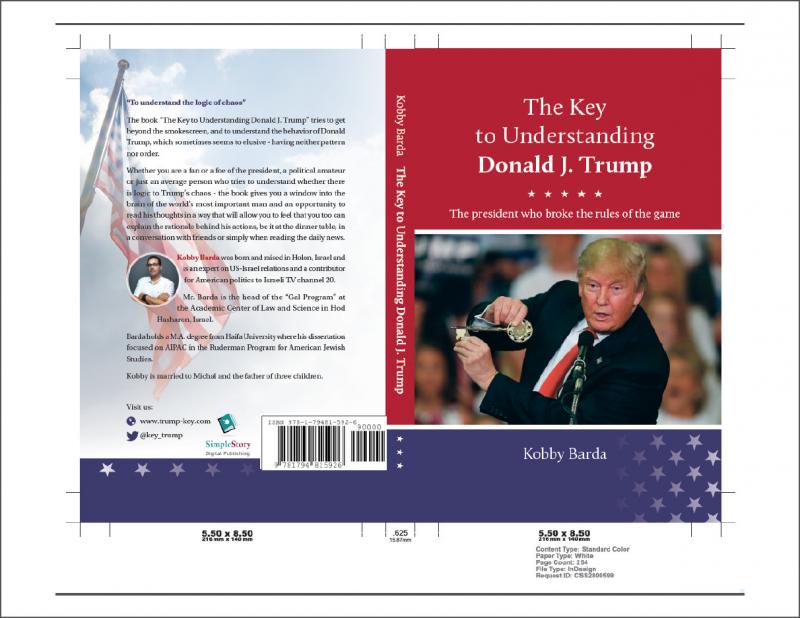 Genre: Nonfiction / Biography & Autobiography / Presidents & Heads Of State Subject: Presidency of Donald Trump ISBN: 978-965-92788-2-4 ASIN: B082HSZ4DH (Digital) Page Count: 281 Publish Date: December 10, 2019 Soft Cover Book: 7.99 (http://bit.ly/2EIJYFL), EBook/Kindle: 3.99 (https://www.amazon.com/-/he/gp/product/B082HSZ4DH?pf_rd_p=a1c204f1-1179-41d8-ab42-98f2b281752e&pf_rd_r=K5VC1XZJ2AZBGJRWYX9K)ABOUT THE BOOK ”To understand the logic of chaos” The book “The Key to Understanding Donald J. Trump” tries to get beyond the smokescreen, and to understand the behavior of Donald Trump, which sometimes seems to elusive - having neither pattern nor order. This book is not a scientific study, but rather an attempt to look at the 45th President of the United States, Donald Trump, and understand his actions, his policy decisions, his motivations, etc. This is done by understanding his background, recurring themes in his behavior, and his opinions as a private citizen, as well as statements during the campaign trail. This book is written in short chapters and includes videos (QR codes), diagrams, tables, images and references that aim to complement and illustrate what is written in each chapter. Reading this book will enable you to understand the thought process of Trump in such a way that, once understood, you, too, will be able to explain why he acts the way he does, his rationale, and even potentially understand how he will act in the future. The next time Trump is dismissed as insane, you can say “Hey, wait a minute, I think I can explain why he acted the way he did.” Whether you are a fan or a foe of the president, a political amateur or just an average person who tries to understand whether there is logic to Trump’s chaos - the book gives you a window into the brain of the world’s most important man and an opportunity to read his thoughts in a way that will allow you to feel that you too can explain the rationale behind his actions, be it at the dinner table, in a conversation with friends or simply when reading the daily news.* The book originally published in Hebrew.FROM THE MEDIA (Hebrew Source) * “The first book written on Trump in Hebrew is promising and sustaining”. Israel Today (Israel largest newspaper) * “The key to understanding Trump” comes into the president’s head and explains the logic of the behavior of the president. The first book on the president written in Hebrew returns to the campaign and analyzes the way the media, marketing and political strategy in which he promoted his ideas in the most planned way”. M’arriv (Israeli Third largest newspaper) COMPARABLE TITLES The Case for Trump - Victor Davis Hanson (https://www.basicbooks.com/contributor/victor-davis-hanson/) Let Trump Be Trump - Corey R. Lewandowski & David N. Bossie (https://www.hachettebookgroup.com/titles/corey-r-lewandowski/let-trump-be-trump/9781546083290/) Understanding Trump - Newt Gingrich (https://www.hachettebookgroup.com/titles/newt-gingrich/understanding-trump/9781478923077/)Trump-key.com @key_trumpABOUT THE AUTHORKobby Barda was born and raised in Holon, Israel and is an expert on US-Israel relations and a contributor for Israeli channel 20. Mr. Barda is the head of the "Gal Program" for Political Leadership at The Academic Center for Law and Science, Hod Hasharon, Israel. Barda holds a M.A. degree from Haifa University where his dissertation focused on AIPAC, and currently is P.HD Candide at Haifa University. In order to understand the phenomenon of President Trump, Barda uses his experience spanning over 20 years as a media consultant and communications expert where he has served as a political campaign manager and advisor to Israeli government ministers, Israeli Parliament members and Mayors. Barda was the man who alerted the world to the highly offensive cartoon of President Donald Trump and Prime Minister Benjamin Netanyahu in The New York Times. Kobby is married to Michal and the father of Ronny, Jonathan & Gili.

You can edit or delete your press release The Key to Understanding Donald J. Trump - By Kobby Barda here

08-26-2020 | Leisure, Entertainment, Miscel …
Advent Messenger
900 Catholic Masses for President Donald Trump
With only three months to go until the November 3, 2020 presidential election, the Trump 2020 campaign is working hard to attract Catholic voters. The Trump campaign has a website to court the Catholic vote. It is called Catholics for Trump 2020 and it is motivating Roman Catholics to support the re-election of Donald Trump by appealing to the abortion issue. The website says: “Catholics for Trump will energize and activate
12-17-2018 | Business, Economy, Finances, B …
Calstate Companies
How Trump Buys Real Estate
LOS ANGELES, CA. If Donald Trump did, in fact, purchase Russian real estate, he might have employed the following strategies: First, he would acquire a team of experts to help him. Trump understands the old saying: “If you act as your own attorney, you have a fool for a client.” This could also apply to the person who tries to be his or her own property manager, real estate broker, accountant,
10-05-2018 | Business, Economy, Finances, B …
Project: Return to Work
Port Charlotte volunteer to receive award from President Trump
A Port Charlotte woman is getting recognition from President Donald Trump for her service to an organization that helps thousands of wounded veterans and others find meaningful employment. Fran Nixon, Florida Missions Operations Manager (MOM) for Project: Return To Work Inc. (R2W), will receive the President’s Volunteer Service Lifetime Achievement Award in a ceremony on Sunday, Oct. 7. “Veterans hurt in combat gave up so much for our freedom,” said R2W
05-28-2018 | Advertising, Media Consulting, …
Spire Research and Consulting
The Trump Presidency:One Year On
One year since President Trump took office, what has been the impact for businesses in Asia? Leon Perera, CEO of Spire Research and Consulting, shared his thoughts in The Business Times – Views from the Top section on 27 November 2017 on the impact on global economy. Thus far, Donald Trump’s Presidency has not been bad for the American stock market and the US dollar. However, the expected infrastructure spending and
12-14-2017 | Business, Economy, Finances, B …
Coefficients Co. Ltd.
Trump Promised to Study US and PH Trade Deal
United States President, Donald Trump, committed to studying the proposed free trade agreement (FTA) between the US and the Philippines. As per the presidential spokesperson, Harry Roque, he stated that the US president had promised to look into the FTA proposal during their 40-minute bilateral conference with PH president, Rodrigo Duterte, amidst the ASEAN (Association of Southeast Asian Nations) summit. “The Philippines is appreciative of the General System of Preference (GSP) and
11-15-2017 | Leisure, Entertainment, Miscel …
Over the Rainbow Group
TRUMP SIGNS EXECUTIVE ORDER ABOLISHING THANKSGIVING
Washington, DC – On October 13, 2017, surrounded by smiling, loyal supporters, President Donald Trump signed an Executive Order banning the celebration of Thanksgiving within the boundaries of the United States and its territories. Expressing a desire to bring Americans together by participating in the ongoing wave of calls for historical accuracy, manifested primarily by efforts to remove monuments recognizing treasonous Confederate military leaders from publicly owned properties, Trump stated his
Comments about openPR
I can't but agree to the positive statements about your portal: easy to use, clear layout, very good search function, and quick editing!
Jens O'Brien, Borgmeier Media Communication