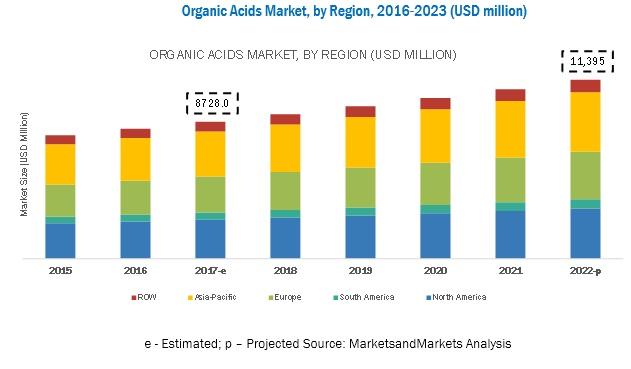 The global organic acids market was valued at USD 8.27 billion in 2016 and is projected to reach USD 11.39 billion by 2022, at a CAGR of 5.5% during the forecast period. The market is growing due to wide scale usage of organic acids in various applications such as food & beverages, personal care products, and pharmaceuticals. Growing demand for convenience food and technological innovations, and production of organic acids from cost effective renewable sources are other factors driving the market growth. Furthermore, increased usage of organic acids in animal feed as a substitute of antibiotic growth promoters (AGP) is another factor that is expected to drive the market for organic acids during the forecast period.Download PDF Brochure: https://www.marketsandmarkets.com/pdfdownloadNew.asp?id=30190158The demand for citric acid is expected to be the highest during the forecast period.In 2016, the global market was led by acetic acid, followed by citric acid. Acetic acid is one of the most largely commercially available types of organic acid. However, the citric acid market is projected to grow at higher rate due to the increased demand in the food & feed industry and wide usage of citric acid in various applications.The food and beverage segment is expected to account for the largest share in the marketOn the basis of application, the food & beverages sector is estimated to account for the largest market share due to increased consumer demand for organic acid-fortified food & beverages, owing to their antioxidant and preservative properties. There is also a growing demand for foods that are produced using milder treatments, which include heat, salt, sugar, and chemicals. Also, newer technologies are introduced to prevent the growth of dangerous bacteria, thus increasing the demand for organic acids in food applications.Environmental concerns are a major challenge for organic acids market.Acetic acid can be a hazardous chemical if not used in safe and appropriate quantities. Acetic acid is used not only for industrial applications, but also in pesticide formulations, as an herbicide to control weeds on fruits; it is also used to control mold and reduce bacterial growth in feed. However, the high concentration of acetic acid in herbicides or animal feed can be harmful to animals, plants, and aquatic life. This is one of the major challenges faced by the manufacturers of organic acids. Further, the consumption of propionic acid in herbicides is decreasing gradually, owing to environmental concerns and regulatory guidelines. In the past, many herbicide products containing propionic acid have been used in various developed countries. The countries have started banning some of these products due to presence of several impurities that were toxic in nature.Make an Inquiry: https://www.marketsandmarkets.com/Enquiry_Before_BuyingNew.asp?id=30190158Asia Pacific is projected to witness the highest growth rate during the forecast period.Asia-Pacific accounted for the largest market share for organic acid in 2016, owing to the increase in demand for organic acid in countries such as China and India. Asia-Pacific is projected to be the fastest-growing market during the forecast period, due to the increased awareness related to the health benefits of organic acid. The relatively lower operational costs in this region enable manufacturers to have competitive pricing on a global platform. In this region, countries are less stringent, in terms of regulations, over the trade and domestic marketing of food additives. Organic acids are manufactured on a large scale in China and are exported to international marketsThis report includes a study of marketing and development strategies, along with the product portfolios of the leading companies. It includes profiles of leading companies such as Cargill (U.S.), BASF SE (Germany), Dow Chemical Company (U.S.), Henan Jindan Lactic Acid Technology Co. Ltd (China), Archer Daniels Midland Company (U.S.), Eastman Chemical Company (U.S.), Corbion (Netherlands), Myriant Corporation (U.S.), Polynt-Reichhold (Italy), Tate & Lyle (U.K.), Koninklijke DSM N.V. (Netherlands), and E.I. Du Pont De Nemours & Company (U.S.).Contact: Mr. Shelly Singh MarketsandMarkets™ INC. 630 Dundee Road Suite 430 Northbrook, IL 60062 USA : 1-888-600-6441 Email: sales@marketsandmarkets.comAbout MarketsandMarkets™MarketsandMarkets™ provides quantified B2B research on 30,000 high growth niche opportunities/threats which will impact 70% to 80% of worldwide companies’ revenues. Currently servicing 7500 customers worldwide including 80% of global Fortune 1000 companies as clients. Almost 75,000 top officers across eight industries worldwide approach MarketsandMarkets™ for their painpoints around revenues decisions.Our 850 fulltime analyst and SMEs at MarketsandMarkets™ are tracking global high growth markets following the "Growth Engagement Model – GEM". The GEM aims at proactive collaboration with the clients to identify new opportunities, identify most important customers, write "Attack, avoid and defend" strategies, identify sources of incremental revenues for both the company and its competitors. MarketsandMarkets™ now coming up with 1,500 MicroQuadrants (Positioning top players across leaders, emerging companies, innovators, strategic players) annually in high growth emerging segments. MarketsandMarkets™ is determined to benefit more than 10,000 companies this year for their revenue planning and help them take their innovations/disruptions early to the market by providing them research ahead of the curve.MarketsandMarkets’s flagship competitive intelligence and market research platform, "Knowledgestore" connects over 200,000 markets and entire value chains for deeper understanding of the unmet insights along with market sizing and forecasts of niche markets.

03-26-2020 | Advertising, Media Consulting, …
MarketsandMarkets.com
Sustainable Growth Opportunities in the Seed Coating Market
The report "Seed Coating Market by Additive (Polymers, Colorants, Pellets, Minerals/Pumice, Active Ingredients), Process (Film Coating, Encrusting, Pelleting), Active Ingredient (Protectants and Phytoactive Promoters), Crop Type, Region - Global Forecast to 2025", is projected to grow at a CAGR of 8.5% from USD 1.8 billion in 2019 to reach a projected value of USD 3.0 billion by 2025. The quality, appearance, and nutritive value of seeds are the key factors
03-18-2020 | Advertising, Media Consulting, …
MarketsandMarkets.com
Organic Feed Market Will Hit Big Revenues In Future | Key Players are Cargill, B …
The report "Organic Feed Market by Type (Cereals & Grains, Oilseeds), Form (Pellets, Crumbles, Mashes), Livestock (Poultry, Ruminants, Swine, Aquatic Animals), Additives (Amino Acids, Enzymes, Vitamins, Minerals, Phytogenics), and Region - Global Forecast to 2025" The global organic feed market size is estimated at USD 6.8 billion in 2019 and is projected to reach USD 10.1 billion by 2025, recording a CAGR of 6.8% during the forecast period. The market
03-18-2020 | Advertising, Media Consulting, …
MarketsandMarkets.com
Phosphine Fumigation Market to See Major Growth by 2022 |Key Players: Cytec Solv …
The global phosphine fumigation market has grown exponentially in the last few years. The market size is projected to reach USD 684.19 Million by 2022, at a CAGR of around 5.46% from 2017. Factors such as increase in awareness about advanced modes of application of fumigation technology, increasing insect population due to climatic changes, and phasing out of methyl bromide fumigants are expected to drive the market growth. There is
03-18-2020 | Advertising, Media Consulting, …
MarketsandMarkets.com
Medicated Feed Additives Market to Witness Unprecedented Growth in Coming Years
The medicated feed additives market is projected to grow at a CAGR of 5.41%, to reach a value of USD 15,320.4 million by 2022 from an estimated USD 11,168.4 million in 2016. Medicated feed additives improve the quality and nutritional content of the feed. These additives help in the growth & development of animals and increase the feed intake. Increase in the awareness of high-quality meat, which is rich in