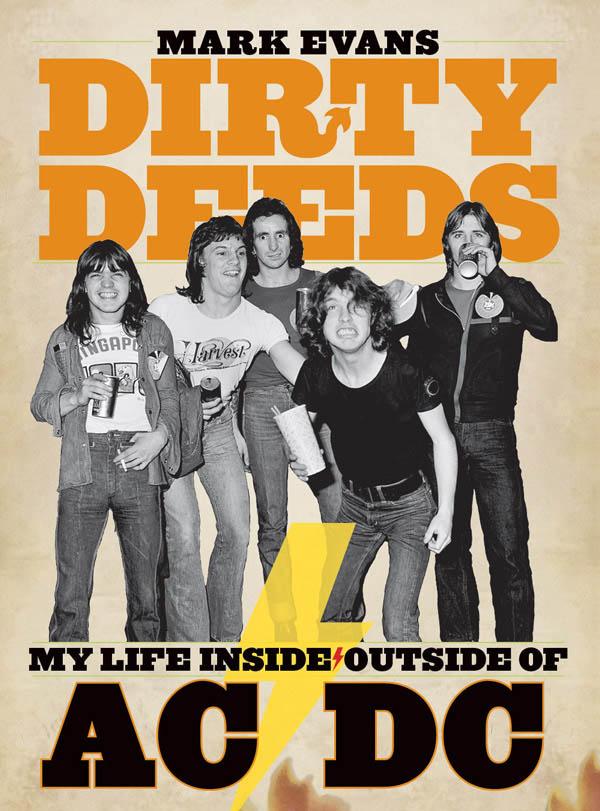 The final cover image for the North American edition of former AC/DC bassist Mark Evans's historic new book "DIRTY DEEDS: My Life Inside/Outside AC/DC" has been revealed. The first-ever book by a member of Bon Scott-era AC/DC is due in November 2011 from Bazillion Points books and is now available for pre-order at this location:

One day in 1975, 19-year-old Aussie rocker Mark Evans walked into a local bar to check out a band. Within days, he played his first show as bass player of AC/DC. A week later he was on national TV, alongside devious schoolboy Angus Young and the wild singer Bon Scott-dressed as a pigtailed, cigarette-smoking schoolgirl and waving a mallet. In the next few years Mark toured internationally, and appeared on the groundbreaking and platinum-selling AC/DC releases High Voltage, Dirty Deeds Done Dirt Cheap, Let There Be Rock, and the '74 Jailbreak EP.

'Dirty Deeds: My Life Inside/Outside of AC/DC' brings the gripping, laugh-out-loud tale of a band that lived fast and played harder than anyone else. The first bio by a band insider during the early years, the book details the struggles and personalities behind the rise of hard rock's most successful group; with guest spots by rock n' roll icons like George Harrison, Gene Simmons, Phil Lynott, Rose Tattoo, members of Metallica, and at least one Elvis impersonator. In his honest and revealing memoir, Mark Evans contends with life's many turns: A rough-as-nails upbringing, lucky breaks, soaring highs, and terrible personal loss and tragedy. It was a long way to the top...and he was just getting started.

"The aggressive attitude that AC/DC had towards Australian bands continued when we shifted overseas. The world's bigger bands became our new targets. Who the fuck did these pricks think they were? We saw a few of the so-called headline acts and straight away knew that we had nothing to fear."