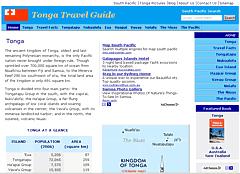 South Pacific Travel has launched its online Tonga Travel Guide with 125 pages of maps, photos, drawings, and travel information. Tonga.SouthPacific.org is based on the Kingdom of Tonga chapter from Moon Handbooks South Pacific, now fully updated by the original author David Stanley. The 11 digital map files used in the printed book have been modified for web use.The site outlines the many sports and recreation opportunities in Tonga. The capital island Tongatapu is ideal for surfing, scuba diving, and bicycling. Nearby ‘Eua Island is an eco-tourism epicenter with some of the best hiking possibilities in the South Pacific. The beaches of the Ha’apai Group are unsurpassed, while the whale watching, sport fishing, scuba diving, kayaking, sailing, and snorkeling are just great in the more northerly Vava’u Group.Tonga is also noted for its living history and culture. Polynesia’s last king ruled absolutely from his palace in Nuku’alofa as recently as 2010 when a system of representative democracy was finally installed in Tonga. The Tongan National Center in the capital Nuku’alofa showcases Tongan culture and traditional dancing. Local troupes also perform at village feasts on Tongatapu and Vava’u where the buffet tables strain under the weight of local delicacies.Tonga.SouthPacific.org joins similar guides to American Samoa, the Cook Islands, Easter Island, Niue, Pitcairn, Samoa, Tokelau, Tuvalu, and Wallis and Futuna on SouthPacific.org. Easy navigation assured by two convenient menus and a sitemap. Sightseeing, accommodations, entertainment, services, and transportation are covered in depth, and there are complete introductions to the history, geography, people, culture, and economy of Tonga. Travelers have never had it so good.About the Tonga Travel Guide The Tonga Travel Guide at http://tonga.southpacific.org was developed from the Tonga chapter in Moon Handbooks South Pacific. After the handbook’s eighth edition in 2004, publisher and author decided that a ninth edition would not be economically viable. As sales of printed guidebooks decline, tourists are turning to the internet for free travel information. This new online Tonga Travel Guide and related Pacific island guides on SouthPacific.org is indicative of the switch from print to digital media.South Pacific Travel 803-225 Rosehill Street Nanaimo, BC V9S1E1, Canada travel@southpacific.org