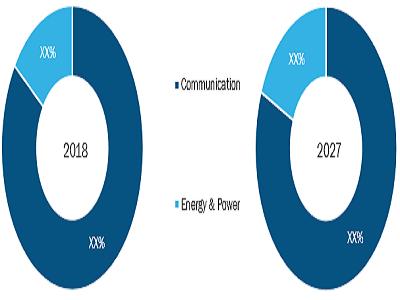 The global submarine cable systems market accounted to US$ 13.4 Bn in 2018 and is expected to grow at a CAGR of 9.2% during the forecast period 2019 – 2027, to account to US$ 30.4 Bn by 2027.Asia Pacific leads the submarine cable systems market in 2018 with a significant market share, Whereas Middle East is anticipated to gro with a highest CAGR. Various significant developments have been witnessed with regards to the deployments of the submarine cable systems in the Asia Pacific region. By 2020, the bandwidth demand for the trans-pacific undersea cables network is anticipated to grow to seven-folds of the current bandwidth value, and thereby attract huge investments for the market. Asia Pacific region is considered to be one of the important communications hubs across the globe and therefore efficient communication cabling infrastructure for empowering seamless information exchange across the data centers is one of the most crucial aspects for the region. Get sample PDF Brochure @ https://www.theinsightpartners.com/sample/TIPEL00002688/?opr-mjThe key players operating in the Submarine Cable Systemsmarket are Huawei Marine Networks Co., Limited, Subcom, LLC, NEC Corporation, Fujitsu Limited, Nokia Corporation, Hawaiki Cable Limited, Sumitomo Electric Industries, Ltd., Nexans SA, Prysmian Group, and Mitsubishi Electric Corporation.The global submarine cable systems market by service is segmented into installation services and maintenance & upgrade services. installation services segment dominates the Submarine cable systems market heavily and is expected to continue its dominance throughout the forecast period from 2019 – 2027. The upcoming submarine cable system projects and offshore wind farms are expected to propel the demand for the installation services in the market.The global submarine cable systems market by application is segmented into communication and energy & power. Communication segment dominates the submarine cable systems market heavily and is expected to continue its dominance throughout the forecast period from 2019 – 2027. In The concerns for faulty lines and natural disasters are widely steering the need for submarine cable system maintenance & upgrade services.In the recent few years, submarine cable systems market has noticed noteworthy M&A and partnership activity. Some of the significant deals include, in 2017 Hubbell Inc. has completed the acquisition of iDevices of Avon. The acquisition would help the Hubbell to strengthen its way to in the field of innovation with the expertise of iDevices in Internet of Things. Another initiative in respect to contractual alliance, is undertaken by Cortem Group consolidated its presence in Saudi territory by signing an exclusive contract with SPF, Safety and Protection Factory. This new exclusive contract signed with the SPF company for the assembly, production and distribution in Saudi Arabia and new management in charge for the Sister Company in Dubai supports Cortem Group to strengthen its presence in Middle East in 2018.The internet plays a critical business function. Businesses have witnessed a paradigm shift in the recent times as the focus has shifted from the products onto the consumers. Businesses have laid emphasis on a more service-based approach rather than product-based approach to conduct businesses. Further, the large populations in the region coupled with a plethora of streams of data generation have led to influx of huge amounts of data. Development in cloud computing technology is yet another factor expected to drive the growth of this market in near future. The construction of new data centers is further fueling the growth of submarine cable system market. Also, in many countries across the region, government is placing stringent regulation over data storage which necessitate the agencies to seek data center services.Inquiry Before Buying @ https://www.theinsightpartners.com/inquiry/TIPEL00002688/?opr-mjKey findings of the study:In APAC region, Hong Kong holds the largest submarine cable systems market share in the Asia Pacific region. Hong Kong The liberalization of the external-facilities based telecommunications market By the Office of Communications Authority (OFCA) in Hong Kong has led to the country adopting an open licensing regime. As a result, many submarine cable systems find Hong Kong to be an important landing site. Nevertheless, India is anticipated to tbe the fasterst growing region of the submarine cable market.In Middle East and Africa region, South Africa is expected to be the fastest growing country and the UAE is the holds the largest share in the market. Africa is experiencing high industrial and infrastructural growth. The energy sector and telecom sector in the region is growing at a high pace attributed to the increasing population and developments in international connectivity. Also, the continuous investment in UAE’s infrastructure is propelling the market growth in UAE.Merger and acquisition are expected to be the key growth strategy to be adopted by players for the next two-three years. However, this strategy could impact competition; it is also expected to generate new market as well as product opportunities as recently combined companies will thrive to maintain position and profitability.Strategic InsightsMarket Initiatives was observed as the most adopted strategy in the global Submarine cable systems market. Few of the recent market initiatives are listed below:2018: NEC Corporation announced that it has signed an agreement with the Southeast Asia–Japan 2 consortium (SJC2 consortium) to build a high performance submarine cable connecting Singapore, Thailand, Cambodia, Vietnam, Hong Kong, Taiwan, mainland China, Korea and Japan.2018: Fujitsu unveiled its new Development of Novel Technology, an ultra-high capacity wavelength-division multiplexing system, to Massively Boost Optical Data Transfer Throughput Using Existing Equipment. The new technology enables the usage of multiple wavelength bands to support expanded transmission capacity between datacenters.2018: Nexans unveiled that it will manufacture and deliver 250 kilometers of subsea fiber-optic cable to Huawei Marine as prime turnkey supplier for the construction and deployment of the SEAX-1 project. The project will connect Malaysia and Indonesia, providing the population of the region with high-speed robust connectivity.Access the complete report with Comprehensive table of contents @ https://www.theinsightpartners.com/buy/TIPEL00002688/?opr-mjContact Us: Call: +1-646-491-9876 Email: sales@theinsightpartners.comAbout Us: The Insight Partners is a one stop industry research provider of actionable intelligence. We help our clients in getting solutions to their research requirements through our syndicated and consulting research services. We are a specialist in Technology, Semiconductors, Healthcare, Manufacturing, Automotive and Defense.