The most loved Half Marathon of the City of Joy (Kolkata, India) is back again! 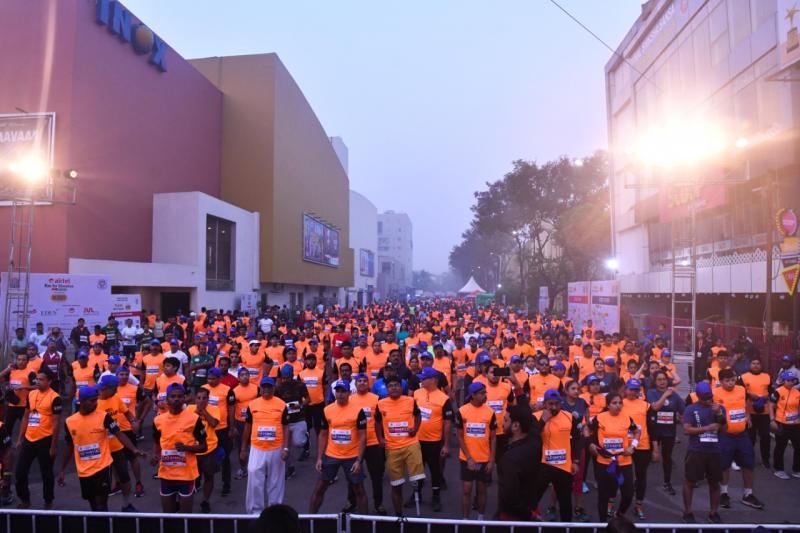 The sixth edition of Airtel Run for Education, the most loved Half Marathon in the city of joy, was flagged off today from City Centre I, Salt Lake, by Mr. Siddharth Sharma, CEO, Bharti Airtel Ltd. West Bengal Telecom Circle in presence of Mr. Anshul Anand, Head Marketing, Bharti Airtel Ltd. West Bengal, Mr. Piyush Daga, President, Round Table India, Mrs. Nidhi Gupta, President, Ladies Circle India, Mr. Nishant Khetawat, Chairman, Calcutta South Round Table India 17, Mr. Atul Gupta, Race Director, Mr. Kunal Khilani, Race Mentor. The Airtel Run for Education (ARFE), a joint initiative by Bharti Airtel and Round Table India & Ladies Circle India, is driven along a single loop 21km through a beautiful scenic route around Bengal Silicon IT Hub. The run was divided into 4 running categories - a 5Km Fun Run to bring along citizens from all walks of life, a 5km timed run designed to encourage new participants, a 10Km and a half marathon. Fully sublime T-shirts, and spectacular Olympic sized medals were presented to finishers of all the three timed categories - half marathon, 10km and 5km. The half marathon category kicked off at 5.15 am, followed the 10km and 5k, and 5km Fun Run at 6.30 am, 7.45 am, and 7.55am respectively. This year’s grand finale run was organised after an extremely successful practice run that saw the participation of over 250 runners - the highest figure for participation in any practice run, various crowd engagement activities on the ground and on social media. The day started off with the blowing of conch shell (shankh) that gave a nice traditional touch to the commencement of the half marathon. Records have already been made this year in terms of getting the highest number of registered runners ever in this Half Marathon. All the runs were flagged of by Mr. Siddharth Sharma, CEO, Bharti Airtel Ltd. West Bengal Telecom Circle, dignitaries from Round Table India, along with other sponsors and guests. The energy in the air was palpable and amplified by the whopping Zumba routine choreographed by experts from the industry.The sixth edition of the half marathon also took the initiative to keep the entire half marathon route trash and pollution-free by conducting a plogging activity on the route in association with Techno India and HSBC Bank. Dedicated runners plogged on the run route to eradicate the plastic pollution that occurred during the event. Reusable bags were used in this activity and the whole initiative saw huge appreciation and encouragement from everyone present. Airtel Run for Education 2019 also celebrated the spirit of those strong humans of the society who have survived cancer and come out as the strongest among us all through the Cancer Survival Walk. Arranged in association with Apollo and inaugurated by fashion designer Agnimitra Paul, this 1.3km long walk was taken up by about 120 cancer survivors and supporting staff from Apollo. The walk started at 8.00am and added another gush of pride and joy to the half marathon. The organisers intended to do the best possible in terms of adding new charm to the half marathon. In an approach to motivate the runners further and thank them for their hard work, Airtel Run for Education and Ajanta Impakto will gift an individual performance video to every half marathon runner (21K) in the event. An all new Impakto Army was also launched on the track this year to cheer the runners throughout as the put their best foot forward towards achieving their goals. Personalised finisher T-shirts from Proline were also introduced as a special attraction at ARFE 2019 whereby all finishers can purchase their finisher T-shirts with their names and finishing timing printed, for a fee. The organisers introduced this in this edition of ARFE after receiving repeated requests from participants who would like to take back an additional memento of their achievement, in addition to the medals.The initiative of Run for Education was started by Round Table India in 2014 and it has resonated with folks from all walks of life who have taken up fitness and running to transform their lifestyles. This event brought enthusiastic professionals and novice runners on the same platform, displaying the true spirit of humanity, sportsmanship, at the same time generating awareness for the education of the less fortunate.Being a Zero Admin Organisation, Round Table India will use all the funds raised through this event in developing infrastructure of needy schools. The funds from the last five editions i.e.2014, 2015, 2016, 2017 and 2018 were used towards building classroom facilities in the following schools - Sarada Sishu Mandir (2014), Katadanga Kendra Vidhyalaya (2015), Champdani Ram Dulari Hindi High School (2016), Fort Gloster Prathmik School (2017), Kanchidiha Saraswati Shishu Mandir Vill Krishananagar(2018) & Bright Future Nursery & KG School, Kakdwip, West Bengal  (2018).RUN-FOR-EDUCATION is a fundraising sporting event, organized by Calcutta South Round Table 17 since 2014, to support the cause of providing education for underprivileged children, with the idea of ‘Freedom through education’. Since 2001, Calcutta South Round table 17 under Freedom through education has built over 50 classrooms in 19 schools impacting 5000Children annually. Out of this, 33 classrooms have been built with the support of this event itself over the last 5 years. Please follow the link below for further details/clarifications: www.airtelrunforeducation.comDLF Galleria, DGK 912 Action Area 1B, New Town, Kolkata 700156 Mob: 8910277647Airtel Run for Education 2019, Kolkata Edition is accredited by West Bengal Athletic Organization. The run setup will have three race categories over 5 km, 10 km and 21 km distances. With the run expecting 8000+ participants to run from City Centre, Salt Lake on 24th November 2019 at4.45 am. The event has generated tremendous chatter on all social networks. The special attraction of the event will be the Plogging activity that will be conducted throughout the run route to keep the area completely garbage and pollution-free post the event. It will also see a Cancer Survival Walk with about 120 cancer survivors to celebrate the spirit and vigour of cancer survivors towards life.

You can edit or delete your press release The most loved Half Marathon of the City of Joy (Kolkata, India) is back again! here