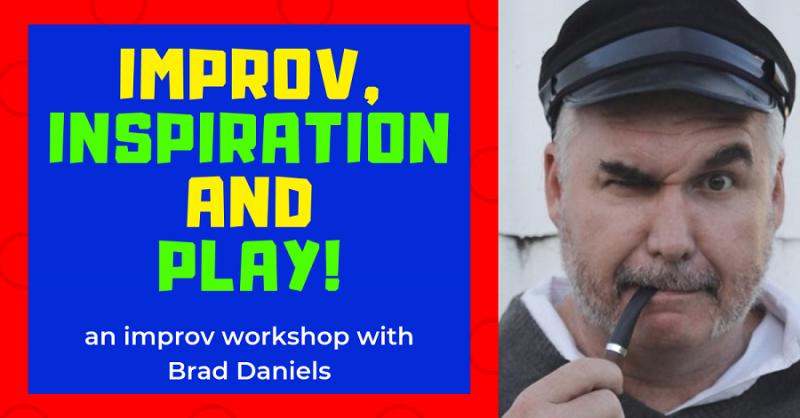 Veteran improv practitioner Brad Daniels has come together with Awesome Possum Events to conduct two improv workshops in Singapore in November 2019 :Improv, Inspiration and Play! (Friday, 22 November 2019)This one-off workshop taught by Brad Daniels is a great way to expand your improv horizons through exploring finding the joy and fun in working with you partner - inspiring them and in turn being inspired.More details on this workshop can be found on: https://www.eventbrite.sg/e/improv-inspiration-and-play-tickets-70646903791From Hard Boiled to Harlequin Romance - Genres in Improv (Saturday, 23 November 2019)Genres (or literary/film styles) are a fun way to bring some spice to your improv - be it soap opera, detective or sci-fi. They have been a part of improv since the beginning, with many shortform games and longform formats using them as an inspiration. But sometimes they can be intimidating!This workshop is packed full of fun activities and tips on unleashing the potential of all sorts of genres - from Shakespeare to Disney, from Horror to Children’s show - as well as ways of improving your improvisation and challenging yourself!More details on this workshop can be found on: https://www.eventbrite.sg/e/from-hard-boiled-to-harlequin-romance-genres-in-improv-tickets-70652047175 About Brad Daniels Brad Daniels started performing improvisation in 1994 and has been working constantly in the field since then.His roots are strongly in the Keith Johnstone "Loose Moose" school of improvisation, but he has taken on board a large number and variety of influences since he began training with Theatre Sports Queensland. He has studied with teachers such as Sean Tinley (Loose Moose), Patti Styles (Impro Melbourne), Keith Johnstone (Loose Moose), Sounds & Fury (LA), and many others.In 2018 he directed and performed in two shows for the Anywhere Theatre Festival - “Show of Hands” - an improv variety puppet show, and “A Midsummer Night’s Whatever” a improvised performance of :new works” by William Shakespeare which won a Anywhere Award as one of the best 10 shows in the festival.In the last 17 years Brad and has appeared in and produced innumerable shows - with Theatresports Queensland, Six of the Best, Sit Down Comedy Club, Impromafia, and his own troupe EDGE Improv. He has directed and starred in many improvised productions, including the sold-out and critically acclaimed “Hard Boiled Dick” as part of this year’s Brisbane Theatre Fringe. Brad also had a regular radio spot on 4ZZZ, performing improv on Friday afternoons. Brad began teaching improv in 1998 with Six of the Best, before starting workshops with EDGE Improv in 2001. He has also performed and taught improv across Australia in locations as diverse as the Adelaide Fringe Festival to Bingara in rural NSW.Awesome Possum Events LP 47 Kallang Pudding Road #05-11, Singapore 349318 Telephone: 9657 4736 Email: coreen@awesomepossum.events Press Contact: Coreen Kuo, Marketing ManagerAwesome Possum Events organises and coordinates a wide variety of events, including workshops and seminars. Through these events, we aim to connect people with different expertise and those seeking to widen their skills and knowledge.

07-13-2021 | Business, Economy, Finances, B …
RIMES
Brad Hunt appointed RIMES CEO to drive the company’s Lean Data Management inno …
London, 26 May 2021: RIMES, the global leader in Managed Data Services (MDS) for financial institutions, today announces that Brad Hunt has been appointed CEO. The appointment comes as the business accelerates the development of its innovative data management solutions for the asset management industry. Brad will lead RIMES in expanding its Lean Data Management (LDM) approach to Managed Data Services (https://www.rimes.com/solutions/managed-data-services/) following the launch of the company’s cloud-based data
03-31-2012 | Industry, Real Estate & Constr …
South-Tek Systems
South-Tek Systems Nitrogen Generator Company Welcomes Engineer Brad Smith
South-Tek Systems experienced a great deal of growth throughout 2011 which was reflected in the expansion of their in-house staff. From administration, to marketing, to engineering, South-Tek Systems welcomed new employees to help manage, develop, and expand their growing footprint. This leading creator of nitrogen gas generating systems has most recently welcomed Brad Smith to its engineering staff. Mr. Smith is a 2010 graduate of North Carolina State University where he
05-02-2011 | Business, Economy, Finances, B …
Fishman Public Relations
Fishman PR CEO Brad Fishman to Speak at IFA Franchise Development Seminar
Chicago, IL – Brad Fishman, the CEO of Fishman Public Relations, will be a speaker at the Franchise Development Seminar in Denver, CO. The Seminar will focus on providing valuable tools and the strategies for franchise development professionals who are looking for the hottest and most innovative ways to build their franchise systems in today’s marketplace. Invited by the International Franchise Association, Brad Fishman will share his many years of
01-05-2011 | Politics, Law & Society
McCurley Orsinger McCurley Nelson & Downing, LLP
McCurley Orsinger Promotes Family Law Attorney Brad LaMorgese to Partner
DALLAS – The Family Law firm of McCurley Orsinger McCurley Nelson & Downing, LLP, is proud to announce the promotion of Brad LaMorgese to Partner in the firm’s Dallas office. “Brad is an excellent attorney who is as comfortable before a jury as he is in appellate court,” says firm name partner Mike McCurley. “Clients recognize his ability to effectively handle all types of Family Law matters, and they appreciate the
10-28-2010 | Business, Economy, Finances, B …
Androvett Legal Media & Marketing
Mistakes in Divorces Can Cost Executives, Says Dallas Attorney Brad LaMorgese
DALLAS – The same drive and attention to detail that moves executives to the top of the corporate food chain also can undercut the outcome of their divorce, says Dallas family law attorney Brad LaMorgese. Mr. LaMorgese, who practices family law at the nationally prominent law firm McCurley Orsinger McCurley Nelson & Downing LLP, says individuals with Type A personalities like CEOs and surgeons often thrive when they’re involved in the
09-15-2010 | Leisure, Entertainment, Miscel …
Hillsides
Jay Leno, Brad Garrett & Gabriel Iglesias Headline at Ice House
(Pasadena, CA)— Jay Leno, Brad Garrett, Gabriel Iglesias are among the celebrity headliners to mark The Ice House’s 50th anniversary. The Ice House prepares for another All Star Comedy Show to benefit Hillsides’ children on Sunday, October 10 at 6:30 p.m. at the Pasadena Civic Auditorium. Pasadena’s legendary comedy nightclub, The Ice House will begin selling tickets through Ticketmaster on Friday, August 27. Additional comedians include “SNL” and “Wayne World’s” Dana
Comments about openPR
We publish our press releases on openPR.de because we like people who are "open" - just like us.
Frank Obels, CEO, INCONET - Informationssysteme, Communication und Netzwerkberatung GmbH