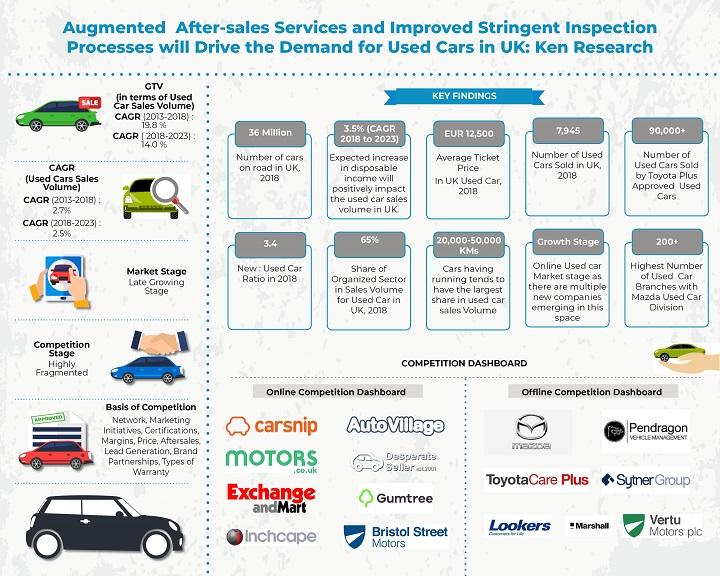 Key Findings
• Used car sales volume in UK is expected to increase in the future, thus growing at a positive CAGR of approximately 3%, due to increased penetration of the companies in the online portals for lead generation.
• The entry of new players including used car dealers, multi-brand outlets and online aggregator’s is expected to further stimulate growth in revenues of the used car industry.
• The disposable income increased at a CAGR of 3.5% during the review period 2018 to 2023. Increasing disposable income will cause certain individuals that previously wanted to purchase a used car to buy a new car as a result of his / her increased budget. This trend is further anticipated to impact growth in revenues of the used car industry in the future.

Growing Demand of Used Cars in UK: In the future, used car market will expect about 30.7% growth in demand for hybrid, plug in-hybrid and pure electric cars in accordance with the Society of Motor Manufacturers and Traders, UK. The used cars provided by the organized market go through a proper inspection process and provide many additional after sales services such as financing and insurance options and many others in the country due to which the organized market will continue to dominate the used car space in UK over long term.
Rising Competition: The used car market of UK was observed to be fragmented with rising competition from various players entering the market. Some of the major offline used car providers operating in the UK include Pendragon, Sytner, Lookers Group, and others. However, there are few factors which bring challenges in the market such as consumer uncertainty which will result downward pressure on new car registrations, having a CAGR of around 0.1% during 2018 to 2023, due to which the consumers will be less willing to upgrade one used car for another. Other factors include the government policies such as London Ultra Low Emission Zone, WLTP and Brexit which could cause fluctuations and erratic used car sales in UK.
Online Space gaining Traction: It has been anticipated that due to increased lead generation through the online car portals, the organized dealers will continue to dominate the UK used car market and is anticipated to experience a CAGR of approximately 6.0% during the review period 2018 to 2023. The used car market has a bright future in the UK. The growth of the used car market is especially due to a considerable high penetration of the finance for used cars due to the rising demand in the country.
Analysts at Ken Research in their latest publication “UK Used Car Market Outlook to 2023 – Market Structure (Organized and Unorganized Market); Type of Used Cars (MPVs / Sedan, Economy / Hatchbacks and SUVs); Kilometers Driven; By Year of Manufacture; and By Car Make)” believed that the used car industry in UK will augment owing to the rising penetration in the online used car portal, increase in organized dealership chains and stringent inspection process. This rise is expected to boost the demand for used cars in the country owing to the increased availability of financing options across the nation. The market is expected to register positive double digit CAGR of 14.0% in terms of Gross Transaction Value and around 2.5% in terms of used cars during the forecast period 2018-2023.

For information click on the below mentioned link:
https://www.kenresearch.com/automotive-transportation-and-warehousing/automotive-and-automotive-components/uk-used-car-market-outlook/263652-100.html

You can edit or delete your press release UK Used Car Market is Expected to reach around GBP 200.0 Billion in terms of Gross Transaction Value (GTV) by the year Ending 2023: Ken Research here

02-18-2020 | Advertising, Media Consulting, …
Ken Research
Growing Demand for Herbal/Traditional Dietary Supplements Will Be One of the Maj …
The urban population is increasing in Vietnam stood at 34.6 Million in 2018 and is expected to triple by 2020 with major focus on cities of Hanoi, Ho Chi Minh City, and Haiphong. The increase in urban population will boost the nutritional supplements market as these people will have a higher awareness about the health and wellness products and better accessibility to the products. The number of Gyms in Vietnam is
02-18-2020 | Health & Medicine
Ken Research
Growing Number of individuals with Medical Insurance coupled with Per Capita Hea …
o Diagnostic Chains in Brazil will capture a larger share in terms of Revenue as Brazilians are very Brand Authentic in different regions. o Growing penetration of medical insurance operators in the country as a result of positive growth in the disposable income will lead to an increase in the penetration of clinical Analysis and Radiology laboratories in remote areas of the country. o The stabilization and recovery of Economy from Economic Crisis that happened
02-18-2020 | Advertising, Media Consulting, …
Ken Research
Will Automated Cold Storage be the Future Success Factors for Philippines Frozen …
Demand for cold storages, especially frozen storage pallets in the Philippines offering a temperature range of -10C to -40C is on a rise like never before. Rising consumption of meat, seafood, ice-creams and processed frozen foods such as patties, fries, and nuggets among the millennial population have been some of the key growth drivers for the industry. Accompanied by the steady growth in demand for these products, the country continues
02-14-2020 | Business, Economy, Finances, B …
Ken Research
Does the Quickbima and Easypolicy Merger highlight consolidation of Insurance Ag …
On 12th February 2020, Quickbima and Easypolicy announced the completion of their merger which started in September 2019. Post-merger, the combined entity would operate under the name of Easypolicy, while Ankit Sachdeva and Sunil Juneja (Co-founders of Quickbima) would join Easypolicy's Board as CTO and COO respectively. In an interview with Ken Research, Ankit Sachdeva, Co-Founder at Quickbima said that "The merger would advance the technological capabilities, strengthen the Board's composition

04-15-2019 | Advertising, Media Consulting, …
QandQ Market Research
Car Monitor Display
https://www.qandqmarketresearch.com/reports/7152010/car-monitor-display-market-78 Global Car Monitor Display Market Insights, Forecast to 2025 This report presents the worldwide Car Monitor Display market size value, production and consumption, splits the breakdown data status 20132018 and forecast to 2025, by manufacturers, region, type and application. This study also analyzes the market status, market share, growth rate, future trends, market drivers, opportunities and challenges, risks and entry barriers, sales channels, distributors and Porters Five Forces Analysis. Download Free PDF Sample
11-08-2016 | Business, Economy, Finances, B …
Market Research Hub
Sports Car Industry Forecasts
Albany, New York, November 8, 2016: Market Research Hub has announced a new research report to its database, titled “Sports Car industry forecasts”. In the two past decades, the industry has been growing at a fast pace. The dramatic expansions of the manufacturing capabilities and rising consumer consumptions in China have transformed China’s society and economy. China is one of the world’s major producers for industrial and consumer products. Far
04-08-2016 | Advertising, Media Consulting, …
Increasing Urbanization To Fuel Growth Of Car Rental Market In India
India Car Rental Market
A research study, titled “India Car Rental Market: Trends, Opportunities And Forecasts (2016-2021)” - (By Value, By Region, By Segment - Radio Taxi, Corporate Rental, Aggregators and Affilators; Key Players; Market Share And Dynamics),” has been recently added by MarketResearchReports.biz to its huge repository of research studies. The research study further provides a detailed analysis of the car rental market in India, focusing on the product segmentation, competitive scenario, and
01-28-2016 | Tourism, Cars, Traffic
yStats.com GmbH & Co. KG
Apple Car
Apple Car – The new Apple driverless car was unveiled it is said to be the top hybrid electric car. The Apple Car will change the automotive industry very soon, learn why, & discover what the Apple Driverless Car will contain. Apple Car - All over, an auto appears like a heartbreaking thing for Apple Inc. to manufacture. Autos are a fiercely commoditised, staggeringly costly, for the most part low-edge
03-10-2011 | Tourism, Cars, Traffic
IQPC GmbH
Connected World - Connected Car
According to ABI research, the number of global users of telematics smartphone applications is set to explode in the next five years from 3.2 million to 129 million users. It is vital that automotive manufacturers keep up-to-date with developments in this field if they are to remain competitive in this fast-paced market. Because their customers won’t wait. At IQPC’s 4th International Conference Connected Vehicles from 12-14 April in Berlin, experts
11-04-2010 | Business, Economy, Finances, B …
Car insurance: Over 50 car insurance advantages
Car insurance: Over 50 car insurance advantages
Over 50 car insurance It has been observed that older drivers tend to have a more mature approach towards driving than new drivers. Car insurance companies are more and more eager to target drivers aged 50 plus or those that have retired as older drivers are more experience, fewer accidents and more consistent. We can say older drivers are present less of a risk. This means the over 50s are less
Comments about openPR
OpenPR is clearly structured and remains true to its principle of confining itself to the essential parts. OpenPR has proven to be a very good and reliable partner to our media agency: Within the shortest time the releases are online and go down well with the media representatives. The success of OpenPR is reflected in the steadily increasing number of press releases. It is good that OpenPR exists!
Ursula Koslik, Director Marketing & PR, F+W Hamburg