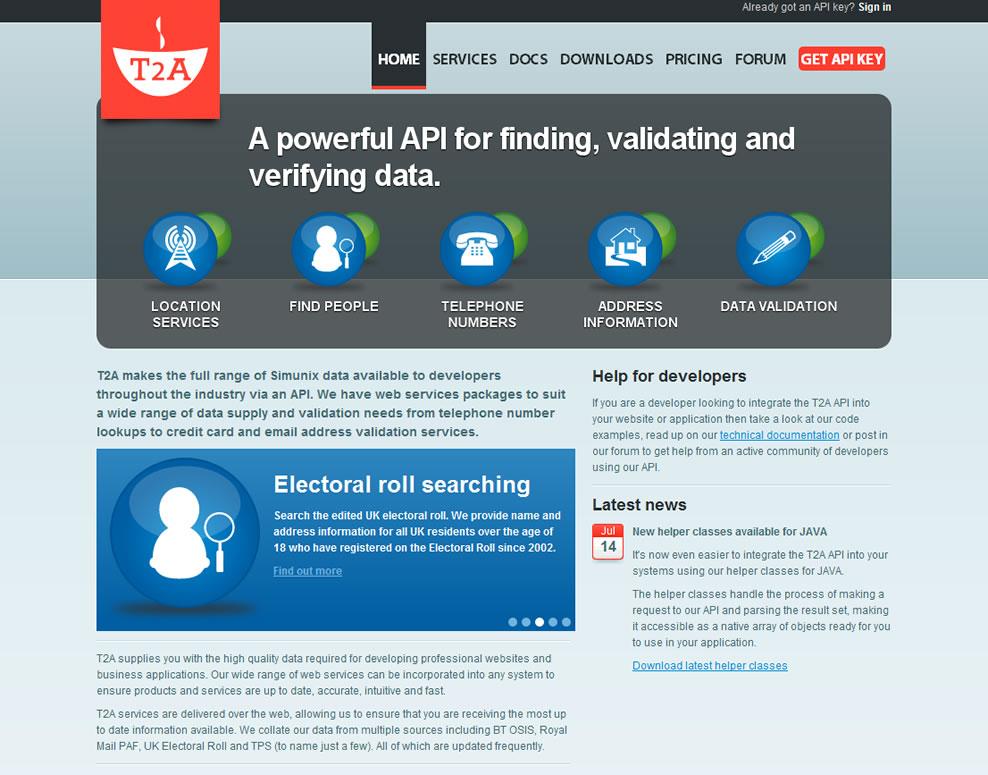 4 August 2011, York The York-based directory solutions provider Simunix has become one of the increasing number of organisations to adopt Colombia’s most recent export by launching its new API on the .co domain which was made internationally available a year ago.The launch of www.T2A.co marks the first time Simunix has made its full range of data available to other web developers and allowed them to incorporate it into their own websites and business applications. Users of T2A can find, validate and verify data by searching the Simunix database of over 300 million records which includes BT and Royal Mail telephone and address information, UK Electoral Roll data, the TPS and CTPS registers, data validation records and Ordnance Survey maps.Managing Director, John Lewis said: “Businesses of all types and from all sectors have a need for directory information. We already provide directory solutions to a number of organisations throughout the UK so creating our own API was a natural next step for us and has meant that we can deliver our directory solutions right to the heart of our customers’ organisations.”When asked about the reasons for adopting the .co domain, John responded, “T2A is such a simple and easy-to-use product. We wanted to reflect this simplicity in our URL; www.T2A.co is short, memorable and easy to understand.”Simunix promises the most competitive rate of pricing for this type of data service and is offering volume discounts across all API functions available within T2A. Ian Martin, IT Director at Simunix adds, “All the data is stored on the Simunix servers and we hold all the relevant licenses needed for the data supplied. Organisations wishing to use this data can access it without worrying about the practicalities of storing such a vast amount of data or of obtaining the appropriate (and often expensive) licences.”Simunix has included extensive documentation and has built a developer forum into the T2A website in order to help users through the integration process.Users can access T2A by visiting www.t2a.co Simunix is the company behind the widely used online directory enquiries service ukphonebook.com, the corporate version of which is in use by almost half of the UK’s police forces in addition to numerous other public and private sector organisations.-ends-Simunix was established in 1998 by Managing Director John Lewis who, following a successful career in Advertising and Marketing, returned to university in 1996 to study Computer Science in response to the emerging popularity of the Internet as a business opportunity.Simunix became the first non-telecom company to license the UK's national directory database and in 1999 became one of the first to set up a free online directory enquiries service - ukphonebook.com.Building on the popularity of ukphonebook.com, the next step was to develop a version of the site designed specifically for commercial use. In 2000, Corporate ukphonebook.com was created initially attracting customers including Merseyside Police and Yorkshire Building Society.Further developments came in 2002 in response to the deregulation of voice directory enquiries services with the switch from the old access code to a range of competing services under the code 118xxx. Simunix took part in the high-profile number allocation lottery and chose 118080, 118365 and 118090 (for international directory enquiries). 118-Express was created at this time to coincide with the changes occurring in the industry sector.Simunix has most recently been working on its own API. T2A will allow users to access the Simunix database and create websites and business applications that feature the ability to find, validate and verify data.Simunix now supplies its range of directory products and services to most private and public sectors including, police, banking, legal, local authorities and many more.Laura LewisSimunix Ltd. The IT Centre York Science Park York YO10 5NP+44 (0)1904 567768laura.lewis@simunix.com www.simunix.com

You can edit or delete your press release Simunix acquires .co domain for new API here