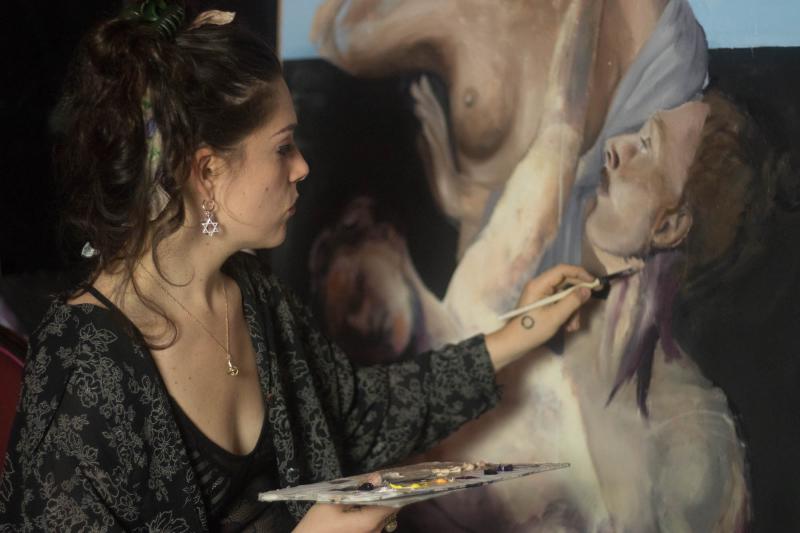 On Nov 28th, 2019 London Artist Abi Joy Samuel will unveil her 8ft x 4ft (122cm-244cm) oil painting of the Madonna making love with three other figures. at a private viewing in a former brothel. The one night show in Hackney Wick will feature works created in the brothel that question if sexual exploration can bring people closer to God.

The title of the show ‘Piety & Sex’ is based on the main piece and whilst many might find the image of the bare-chested Madonna inappropriate, hanging it in a room that housed countless, celebrity-filled sex parties in the nineties seems, perfect.

Abi’s view on the piece is that “Historically, the idea of a woman exploring themselves sexually has been considered taboo. The idealised woman in European art is often depicted as 'virginal', 'innocent' and 'untouched'. I am seeking to understand if it is possible to be a sexual woman in today's society, whilst remaining pious and devoted to searching for God. Furthermore, can sexual exploration take you to God?

The figure at the top is painted realistically with soft brush strokes and natural skin tones. Her pose, gentle facial expression and golden halo are all depictions of the traditional Madonna, whilst her breast is clearly exposed to represent her fearlessness when it comes to her naked body and female prowess. The male figure to the right gazes longingly up to the Madonna, desiring to be on her level of enlightenment. The height difference between the two symbolises the dominance of women in both sexual and religious practice.

This painting was inspired by my frequent visits to the church opposite my house and be-friending the Vicar. He and I would have private discussions talking about the struggles of our humanity whilst trying to do right by God. This painting, summaries the profound experiences I had during our discussions and also whilst sitting alone in the church.

A former student at Central Saint Martins with a degree in Fashion Design at the University of Westminster, Abi has studied portraiture and anatomy at Hampstead School of Art and Heatherley's School of Fine Art and won the 2019 HSF Art Fair Lexus Prize.
For an invitation to the Private View on the 28th readers can email:
dickie@richardgold.com.