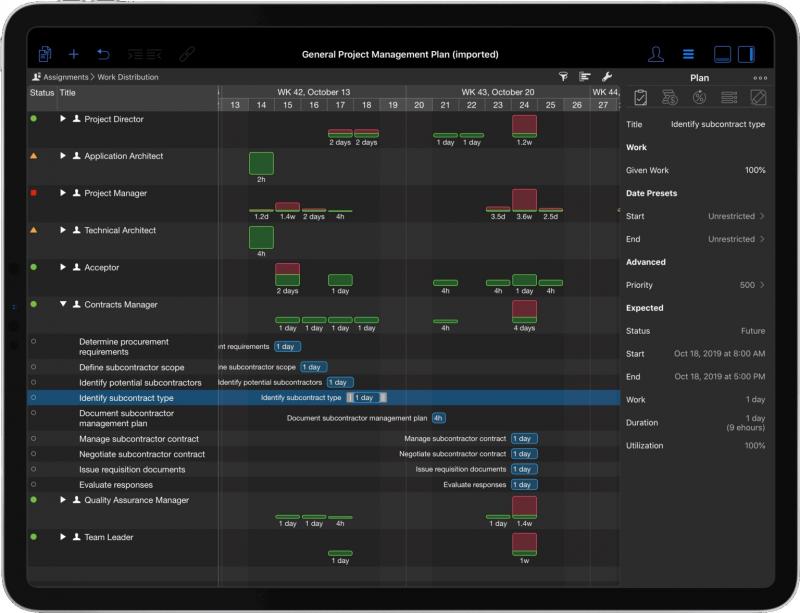 Merlin Project is released in its 6th version on the anniversary of its birth.Almost exactly 15 years to the day after the first version of Merlin, the sixth generation of the popular project management software for Mac, iPad and iPhone was released today. The new version comes with many graphical improvements.The so called Dark Mode is a helpful setting when it comes to working in the evening or in dark surroundings - a fate that affects many project managers. With the new version 6.0 Merlin Project supports the Dark Mode on Macs, iPads & iPhones. In contrast, Merlin Project 6 also offers a Light Mode with a bright inspector for a consistently light appearance. There are four ways to combine the different displays: For example, the contents of a project can appear bright in Dark Mode. Merlin Project 6 now supports the accent colors on the Mac, which is particularly impressive in the new start dialog. This provides direct access to all templates and previous documents. A new, practical view menu makes it easier to open the numerous views of a project.On the iPad, Merlin Project 6 can now handle multiple windows - the so-called scenes. It is even supported to open one project in several scenes simultaneously.Merlin Project 6 requires at least macOS 10.12 or iOS 12. Users will receive the new version as part of the regular updates. Interested parties can test all functions free of charge for 30 days. The demo version can be downloaded from the manufacturer's website: https://www.projectwizards.net .ProjectWizards GmbH Lichtenrader Straße 11 49324 MelleFrank Blome frank@projectwizards.net +49-5422-959208About ProjectWizards GmbHProjectWizards firmly believe that great software empowers people to accomplish complex tasks with ease. The company has been working for over a decade on allowing customers to experience this magic in Merlin Project. Today, Merlin Project is the leading project management solution for macOS and iOS. Consistently recognized as the industry's innovation pioneer, thousands of customers from around the world accomplish their project goals with Merlin Project.

You can edit or delete your press release Merlin Project 6 is here! here

05-02-2017 | IT, New Media & Software
pdgindia
Engineering Project Consultant | Software Development Project
Pdgindia provide android training in pune India and also provides Corporate training in Android,‬Web Designing,Website Development,IEEE Project Development. Project Development Group was set up in 2012 with an aim to establish itself among leading Global Project Providers. On road to the vision, the company has already emerged among India's fastest growing organizations that provide quality projects along with complete project guidance and training. The company motto "Your Destination For Perfection" reflects
02-05-2013 | Business, Economy, Finances, B …
Mongoose Publishing
Pet Project Malaysia 2013
To be held on 23rd March, 2013 (from 9am to 6pm) at The British International School of Kuala Lumpur in association with Expatriate Lifestyle, Pet Project Malaysia is BACK and we are once again “Getting Active to Help Save Animals”. Created in 2011, this is an event to unify the community in supporting animal welfare by doing something FUN and proactive. This event is open to the public and we
05-08-2012 | Business, Economy, Finances, B …
Gower Publishing Ltd
Sustainability in Project Management
Sustainability is one of the most important challenges today. How can prosperity be developed, without compromising the life of future generations? Companies are integrating ideas of sustainability in their marketing, corporate communications, annual reports and in their actions. It is for that reason that 'sustainability' will find its way to project management methodologies and practices. This book explores the concept of sustainability and its application to project management. It aims
02-21-2012 | Business, Economy, Finances, B …
Gower Publishing Ltd
Second Order Project Management
Second Order Project Management will help alleviate the frustration that every member of the profession has experienced when trying to gain approval for investment in process improvement from sponsors. Illustrated by extracts from a series of interviews with an international group of very senior managers responsible for managing highly complex projects, Michael Cavanagh explains there is nothing magical, or even complicated, about Second Order Project Management. Gower is recognised as
02-14-2012 | Business, Economy, Finances, B …
Gower Publishing Ltd
Project Psychology
Whether looking to set up and manage a new project or working to develop the competence and maturity of an organization's project management capability, Sharon De Mascia's book will provide insights and tools for making sense of the people involved and for managing them to best effect. Project Psychology:Using Psychological Models and Techniques to Create a Successful Project was published by Gower in January 2012. Hardback £60.00 ISBN 978-0-566-08942-8 Gower is recognised
01-10-2011 | Science & Education
CLICK ACADEMY
Click Academy: Locomotive Project
A pinhole photography exhibition at the Menier Gallery in London on 10-15th January 2011. Artists Marta Kotlarska, Anna Udowicka and Curator Olga Glazik from Polish group Click Academy who have collaborated with a group of Polish young people living in London in order to prepare illustrations for Julian Tuwim’s Locomotive poem. Pinhole photography is lens-less photography where a tiny hole replaces the lens. Light passes through the hole and an image
Comments about openPR
OpenPR is clearly structured and remains true to its principle of confining itself to the essential parts. OpenPR has proven to be a very good and reliable partner to our media agency: Within the shortest time the releases are online and go down well with the media representatives. The success of OpenPR is reflected in the steadily increasing number of press releases. It is good that OpenPR exists!
Ursula Koslik, Director Marketing & PR, F+W Hamburg