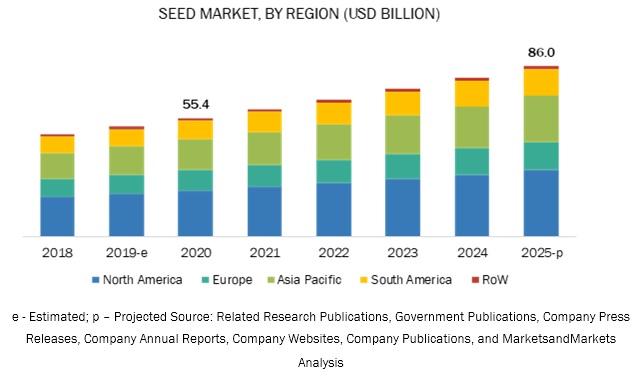 The report “Seed Market by Type (Genetically Modified & Conventional), Trait (Herbicide Tolerance, Insect Resistance), Crop Type (Cereals & Grains, Oilseeds & Pulses, Fruits & Vegetables), and Region (NA, EU, APAC, SA, RoW) – Global Forecast to 2025″ The global seed market is estimated to be valued at USD 55.4 billion in 2019 and is expected to reach a value of USD 86.0 billion by 2025, growing at a CAGR of 7.6% during the forecast period. Factors such as increasing application of cereals, oilseeds, and vegetables in the food, beverages, biofuels and the pet food industry alongside growing technological advancements, such as the adoption of hybridization and genetically modified seeds are driving the growth of the market.Download PDF Brochure: https://www.marketsandmarkets.com/pdfdownloadNew.asp?id=126130457The conventional segment is estimated to account for a larger market share, in terms of value, in 2019The conventional segment is accounted to hold a larger market share since a large number of consumers are focused on the adoption of organic foods for consumption. Companies are also focused on the introduction of hybrid seeds which would be able to cater to the problems which farmers face due to the growing cases of infestation on crops.The other traits segment is estimated to hold the largest market in the seed industry, in terms of value, in 2019The other traits hold a larger market share in the genetically modified seed market since the adoption of crops with multiple traits has reduced the application of pesticides on crops as a result of which, the cost of cultivation has also decreased. Companies are looking at adoption of crops which have multiple traits such as disease-resistance, stress tolerance, and drought-resistance among others since the presence of multiple traits would cater to the growing menace of pests which are gaining resistance to single traits.The cereals & grains segment, by crop type, is estimated to account for the largest market share, by value, in 2019Cereals & grains are said to account for the largest market share due to factors such as an increase in consumption of cereals & grains as staple foods in various Asian and Southeast Asian countries. The growing international demand has also promoted major cereals & grains producers such as China and India to increase their production. The widespread adoption of crops such as corn from the feed, biofuel, and food industries also drives the growth of this segment.Make an Inquiry: https://www.marketsandmarkets.com/Enquiry_Before_BuyingNew.asp?id=126130457Asia Pacific is projected to grow at the highest CAGR during the forecast periodAsia Pacific is the fastest-growing region in the seed market owing to the presence of some of the major seed producers in the world such as China and India. Most of the South East Asian countries are also focused on the production of seeds due to the favorable climatic conditions. Owing to the growing demand from the neighboring countries and the regions such as Europe and North America for oilseeds to cater to the biofuel demands of the importing nations, the market for seeds has been growing in the Asia Pacific region.This report includes a study on the marketing and development strategies, along with a study on the product portfolios of the leading companies operating in the seed market. It includes the profiles of leading companies such as BASF (Germany), Bayer AG (Germany), Syngenta AG (Switzerland), KWS SAAT SE (Germany), Land O’ Lakes (US), Sakata Seed Corporation (Japan), Groupe Limagrain (France), Corteva Agriscience (US), United Phosphorous Limited (India), DLF (Denmark), Longping Hi-tech (China), Rallis India Limited (India), Enza Zaden (The Netherlands), Takii & Co. Ltd (Japan), and Barenbrug Holding B.V (Netherlands).Contact: Mr. Shelly Singh MarketsandMarkets™ INC. 630 Dundee Road Suite 430 Northbrook, IL 60062 USA : 1-888-600-6441 Email: sales@marketsandmarkets.comAbout MarketsandMarkets™MarketsandMarkets™ provides quantified B2B research on 30,000 high growth niche opportunities/threats which will impact 70% to 80% of worldwide companies’ revenues. Currently servicing 7500 customers worldwide including 80% of global Fortune 1000 companies as clients. Almost 75,000 top officers across eight industries worldwide approach MarketsandMarkets™ for their painpoints around revenues decisions.Our 850 fulltime analyst and SMEs at MarketsandMarkets™ are tracking global high growth markets following the "Growth Engagement Model – GEM". The GEM aims at proactive collaboration with the clients to identify new opportunities, identify most important customers, write "Attack, avoid and defend" strategies, identify sources of incremental revenues for both the company and its competitors. MarketsandMarkets™ now coming up with 1,500 MicroQuadrants (Positioning top players across leaders, emerging companies, innovators, strategic players) annually in high growth emerging segments. MarketsandMarkets™ is determined to benefit more than 10,000 companies this year for their revenue planning and help them take their innovations/disruptions early to the market by providing them research ahead of the curve.MarketsandMarkets’s flagship competitive intelligence and market research platform, "Knowledgestore" connects over 200,000 markets and entire value chains for deeper understanding of the unmet insights along with market sizing and forecasts of niche markets.